Brazilian journalists will now have an important resource for reporting and editing science journalism.

On Friday, Nov. 5, the Knight Center for Journalism in the Americas and the Serrapilheira Institute, of Brazil, will publish the Portuguese translation of the KSJ Science Editing Handbook during a special webinar.

Click here to participate via Zoom (no pre-registration required). The webinar, which will be held in Portuguese only, will also be streamed to the Knight Center's YouTube channel. 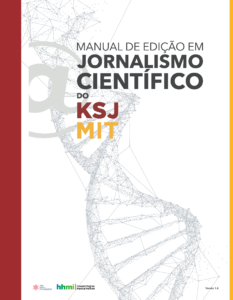 The handbook, originally published in English, is a product of the Knight Science Journalism (KSJ) Fellowship at the Massachusetts Institute of Technology (MIT) in the U.S. With chapters written by renowned science editors and journalists, it provides insights, knowledge, tips and resources for editing and reporting science journalism.

“We are delighted to launch the Brazilian edition of the KSJ handbook for science editors during the webinar on Friday,” said Rosental Alves, Knight Center founder and director. “The team of four Brazilian science journalists that worked on the translation and the adaptation of the handbook to the Portuguese version will discuss the highlights of the book and how useful it is for journalists who cover topics of science and health. They will also discuss the current status of the coverage of science and health by Brazilian journalists."

The handbook was also previously published in Spanish.

"We are thrilled to see the Science Editors Handbook – which offers insights on some of the most important issues in science journalism from some of the best editors working today – be published in Portuguese,” said Deborah Blum, director of the Knight Science Journalism Program at MIT. “This translation enables us to reach some critically important countries and science-interested audiences, especially in our Latin American neighbor of Brazil.”

The Brazilian edition is an initiative of the Knight Center, thanks to generous support from the Serrapilheira Institute, a philanthropic institution that fosters science in Brazil.

"The KSJ-MIT manual is an important resource that was produced by scientific journalism professionals with the highest expertise in the world, which is why we are happy to make it available to Brazilian journalists and editors,” said Natasha Felizi, director of scientific dissemination of the Serrapilheira Institute. "We believe this could be one of the bedside books of reporters covering science in Brazil."

The handbook will be launched at the end of a Knight Center Massive Open Online Course (MOOC) in Portuguese on science journalism that gathered more than 2,300 journalists from all regions of Brazil and several other countries.

“It’s a great way to celebrate the end of this fantastic MOOC,” Alves said. “This KSJ handbook is helping and will help scores of journalists around the world to improve their coverage of science and health topics that are so important in our daily lives and society. We are so grateful to collaborate on this project.”

On Nov. 5, the handbook versions in English, Spanish and Portuguese will be available to download for free from the Knight Center’s Journalism Courses website.