In Venezuela, the light coffee taken mid-morning or mid-afternoon to create space for conversation or relaxation is called a guayoyo. 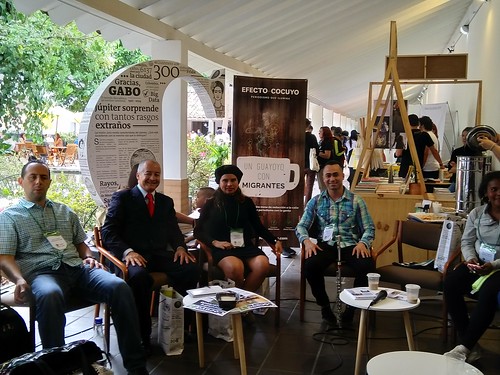 It’s from this tradition and a desire to learn about the experiences of Venezuelan migrants from the protagonists themselves that digital site Efecto Cocuyo is organizing Guayoyos con Migrantes (Guayoyos with Migrants) around Latin America.

In June 2019, the UN Refugee Agency and International Organization for Migration estimated that 4 million Venezuelans had left the country. “Globally, Venezuelans are one of the single largest population groups displaced from their country,” the organizations said.

Efecto Cocuyo has been doing guayoyos in 2016, starting with the coverage of women. They created them “to plan content with the people,” Danisbel Gómez, director of strategy of Efecto Cocuyo, told the Knight Center. “It is a way to ground or nurture our coverage with the focus and the vision of those who read us or of those who are being directly affected by some issue in particular.”

In that sense and thanks to the support of allied media such as El Colombiano, in Colombia, and the organization Conectas Derechos Humanos, in Brazil, the Venezuelan site has convened and talked with groups of Venezuelans who migrated to those countries recently and in the past several years to learn what kind of information they need from journalism.

“This is not an assistance-related activity, it is an activity, if you will, of information, about services and awareness of the human rights that all migrants in the world have. I don’t lose the status of citizen and have no rights because I go to another country,” Gómez said.

"We see that there is a lot of misinformation in general," Reyes said. The journalist gave as an example the possibilities that exist for migrants in Brazil, who can legalize their situation with a relatively simple procedure. “Not everyone has that information. So, people waste a lot of time, lose money, and are very vulnerable and can be victims of scams,” she said.

In the first guayoyo with migrants that they organized in Medellín, Colombia on Oct. 3, Gómez said that attendees suggested story ideas to the journalists on how to interview people who are at the border, information on how a foreign person inserts themselves in the labor market of the country they go to, on vaccination campaigns for children and adults, on services, on processing legal residence permits, etc.

From that meeting, journalists from El Colombiano managed to identify coverage topics, themes for supplements, for its site, as well as collected ideas for mobile applications, Gómez said. “It was quite complete. As a digital media outlet that is here in Venezuela, we ratify the need that we have to create a platform that is regional, of service and of stories that serves all the migrants that are in the region. And that at the same time, serves other media that want to participate in this initiative to join the project,” she added.ƒ

On Oct. 15, the second Guayoyo con Migrants was held, this time in Sao Paulo, Brazil, at the headquarters of Conectas Human Rights. The third is being coordinated with a digital media outlet in Chile and then the fourth will be in Argentina. Two other countries that are being considered for the guayoyos are Peru and Ecuador.

The guayoyos are part of the first stage of the Cocuyo Migrante collaborative journalism project that Reyes explained. Another stage of that project is the creation of a network of Venezuelan migrant journalists, Reyes said. The idea is to "generate a database with all the investigations that are being done on Venezuelan migration."

“And at this moment we are in the stage of data collection, through Cocuyo Migrante and through an investigation that we are doing on which initiatives exist that are dealing with the issue of [Venezuelan] migration. The idea is not to repeat efforts but to try to maximize all the efforts that exist, to try to join them together,” she explained.

Therefore, they will also work in partnership with Panas Digitales, a network of more than 40 Venezuelan journalists working outside Venezuela, in various countries around the world, covering Venezuelan migration, Reyes said.

Due to the lack of access to information that Venezuelan migrants have in Latin American countries to which they migrate, the Cocuyo Migrante platform will seek to have greater reach in social networks, providing relevant information for migrants, according to Reyes.