After experiencing the most violent year for the press in 2022, journalists in Peru start 2023 with almost one attack per day while covering the social crisis

Photojournalist Aldair Mejía was in the vicinity of the Inca Manco Cápac airport in the Peruvian city of Juliaca, department of Puno in Southern Peru, covering clashes between protesters and police when law enforcement officers wounded him in the leg and threatened to kill him.

It was Jan. 7, 2023, just one month to the day since the impeachment and arrest of President Pedro Castillo, which triggered a series of violent protests that have left almost 50 people dead as of Jan. 10 in several cities across the country. Since that day, more than 70 cases of different types of aggressions against members of the press have been registered, nine of them in the first 10 days of 2023.

Mejía said that around 10:00 in the morning, shortly after the protest began, two policemen ran up to him and one of them knocked him down with his riot shield. 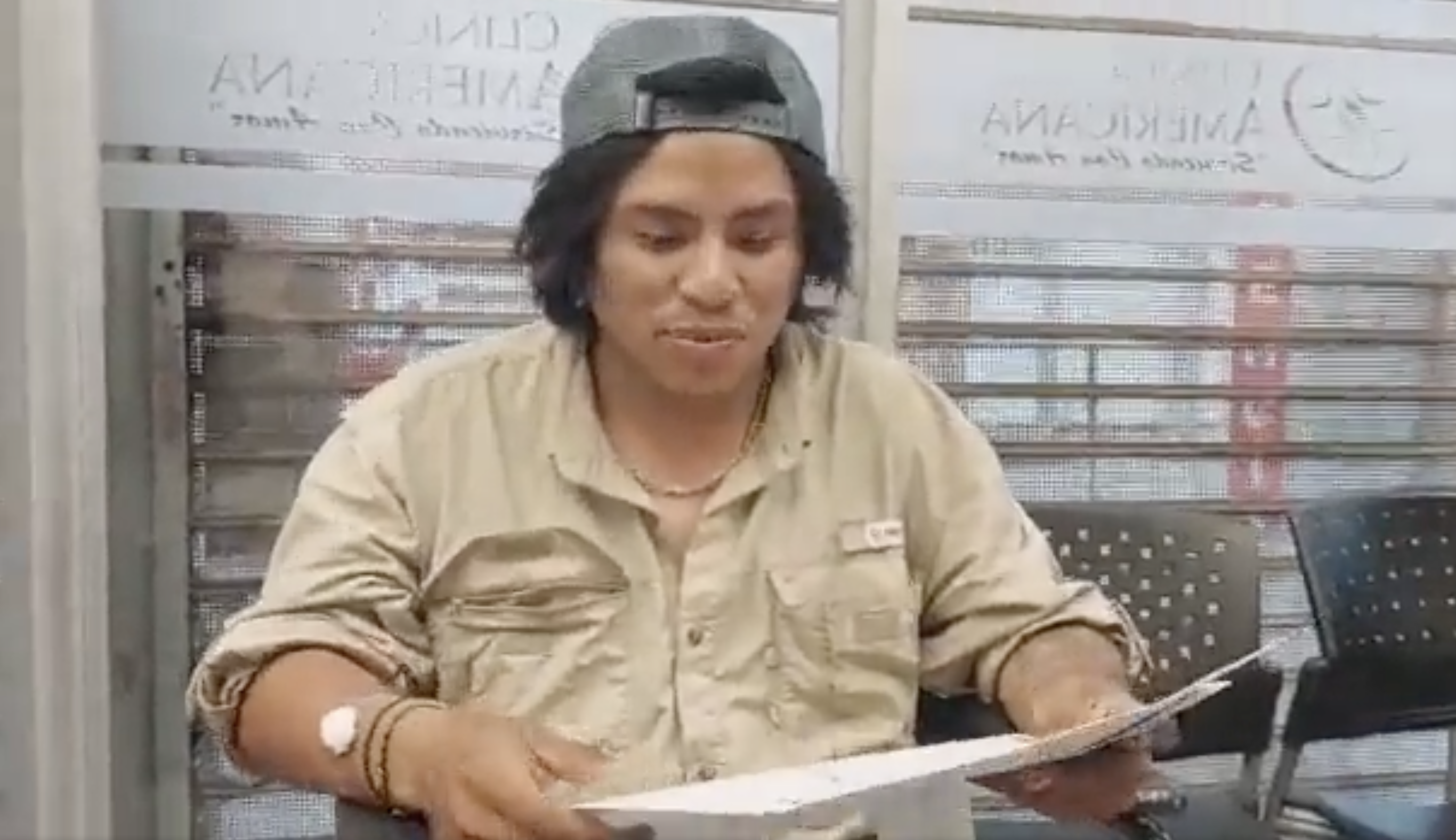 Photojournalist Aldair Mejía was hit by a rubber pellet in the leg while covering protests in Peru. (Photo: IPYS Twitter)

"I told him 'press, press, I am from the press!' And he said I was a rebel. In reality, I’m not a rebel, I’m only press. He gripped my badge tightly and wanted to tear it up," Mejía told Peru's Instituto Prensa y Sociedad (IPYS, by its Spanish acronym).

As the photojournalist tried to stand up and leave, the agent tried to take his camera and threatened him, telling him that if he did not leave, he would "blow his head off," Mejía told the National Association of Peruvian Journalists (ANP). But it was when, moments later, the journalist placed himself between the demonstrators and the police to capture images that he was shot by the agents.

"I was just looking at my cell phone and in a few seconds my leg went numb and I said ‘heck’ and it hurt. And then I realized I was bleeding. I raised [my pants’ leg] and there was a hole and people were shouting ‘pellet, pellet! bullet, bullet!'" Mejía said. He said that at first he didn't feel much pain, but as a few minutes passed he began to feel it.

"Demonstrators carried me to a small market, isolated me from the police, and that is where they cleaned the blood off me. They wrapped this bandage around my knee, so not too much blood would come out," he said.

Mejía was taken to the American Clinic of Juliaca, where, according to ANP reports, the authorities of the institution tried to misinform about the origin of the wound on the photojournalist's leg.

"What we at the National Association of Journalists most deplore is that we have information that they tried to change the medical report. Despite the fact that it was a rubber pellet, the head of the clinic wanted to say that it was a stone’s impact," Zuliana Lainez, ANP’s president, said.

Mejía was not the only journalist attacked by police during the demonstrations in Juliaca. IPYS reported that José Yupanqui, of the Exitosa Noticias network, and Reynaldo Coila, of the local station Juliaca la Decana, were assaulted with shoves to prevent them from covering the confrontations between police officers and demonstrators.

"At all times journalists identified themselves as press and showed their badges. The police officers tried to tear them away from them while insulting and threatening them," reads a communiqué published by IPYS.

Two days earlier, on Jan. 5, journalists suffered aggressions and harassment in Lima, the country's capital, during protests against the government of Dina Boluarte, who took office after Castillo's dismissal.

Panorama TV reporter Bryan Matías was prevented from covering the events after demonstrators threw water and objects at him and hurled insults. 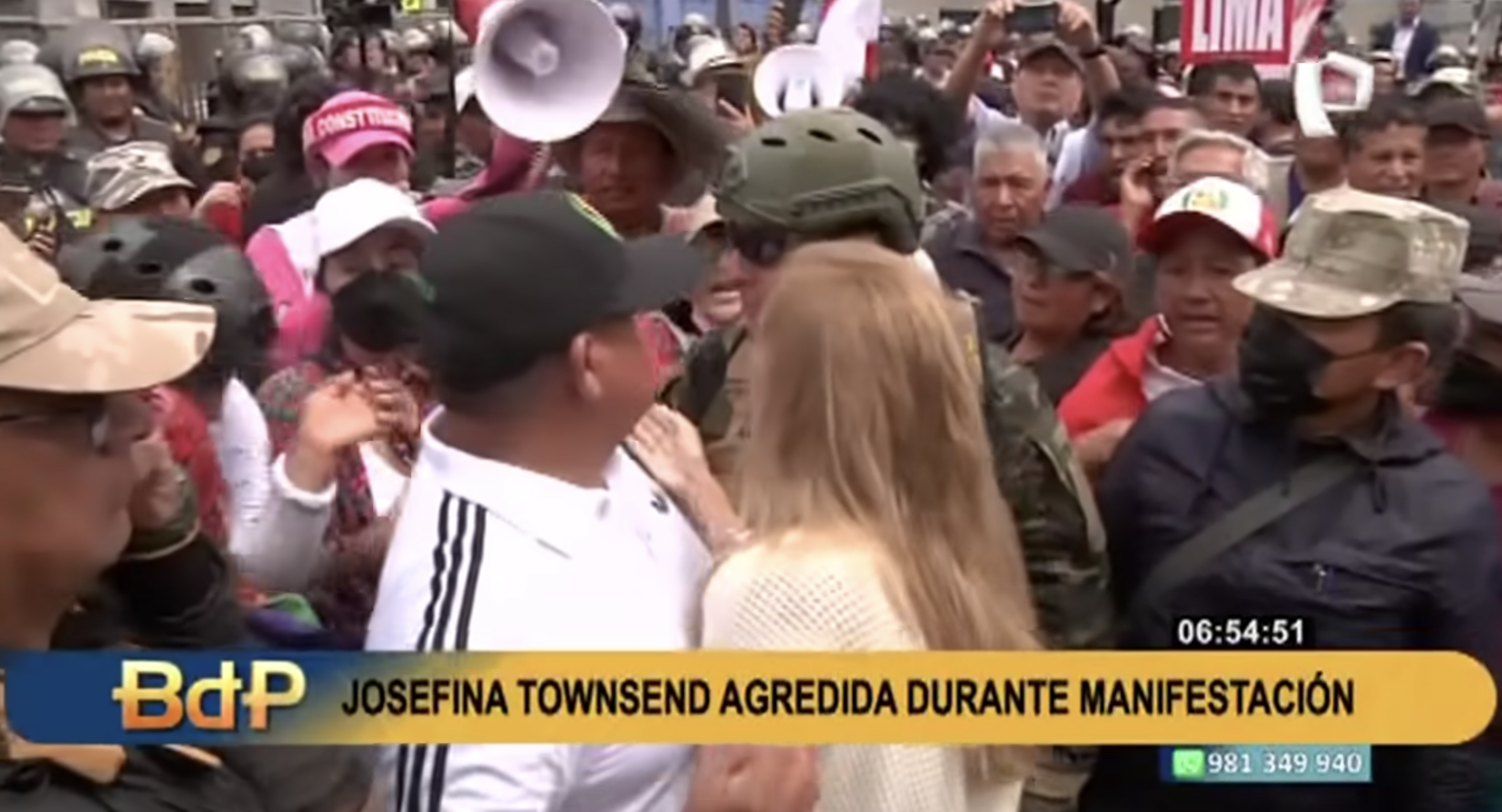 Photographer Walter Hupiu was beaten and pulled by officers of the Peruvian National Police, even though he was clearly identified as a press worker.

"Knowing the job I was carrying out, knowing that I was working for the press, they tried to [handcuff me]. [...] The only thing, I think, that was preventing them from handcuffing me was that I was already on the ground and was being dragged. So this cannot be normalized, this cannot in any way be accepted by public opinion as a procedure," Hupiu said during a press conference held on Jan. 10 by representatives of the ANP, IPYS and other press freedom organizations. They met to jointly condemn violence against the press and demand protection measures for journalists.

"Violations to the freedom to inform in a democracy are unacceptable. We reject any abuse of authority, as these incidents are not isolated cases. We demand guarantees for our colleagues who cover the protests and we demand an end to harassment and threats to freedom of the press," reads the joint statement presented at the press conference, which was also attended by representatives of the National Coordinator of Human Rights of Peru (CNDDHH), the Association of Photojournalists and the National Coordinator of Communications.

Peru's press had its most violent year so far this century in 2022. Last year 303 attacks on journalists and media outlets were registered in that country, which surpasses the record of 2020, when 239 aggressions were registered, according to ANP’s annual report.

December was the month with the most attacks on press teams in 2022, with 63 cases registered. Uprisings following Castillo's dismissal and against the Boluarte government have been the main factor behind the increase in aggressions against the press. According to the ANP, a high percentage of the violence registered during December came from demonstrators.

One of the first cases that month was that of journalist Josefina Townsend, of the television program "Sálvese Quien Pueda," who on Jan. 7 was surrounded by demonstrators while covering the start of protests near the Peruvian Congress in Lima. One person pulled her by the hair while several others hurled insults at her. When she tried to flee, demonstrators followed her, continued to insult her and threw objects at her.

Days later, on Dec. 10, in the city of Huacho, police officers beat journalists Williams Moreno, of Radio Stereo 92.1, and Sergio García, of Radio Máxima, with their batons while they tried to capture on video the police brutality carried out against demonstrators on a highway.

Dec. 12 was one of the most violent days of the month for the Peruvian media. In the city of Ica, in the south of the country, journalist Alí Ayala and his fellow cameraman Rafael Palacios, from TV Peru, were making a live transmission from a protest point on a highway when a bus approached and some people got out and attacked the journalists.

One of the assailants began to beat them with a metal-tipped hose until they both fell to the ground and were kicked. The aggressors broke the windows of Ayala and Palacios' vehicle and destroyed their camera.

"We understand their grievances, the crisis situation in the country, but they came against our news outlet.  In reality, we’re covering all these protests, all these grievances, [but] they went directly, without words in-between, to attack us, to break our TV equipment," Ayala said during the transmission of TV Peru. 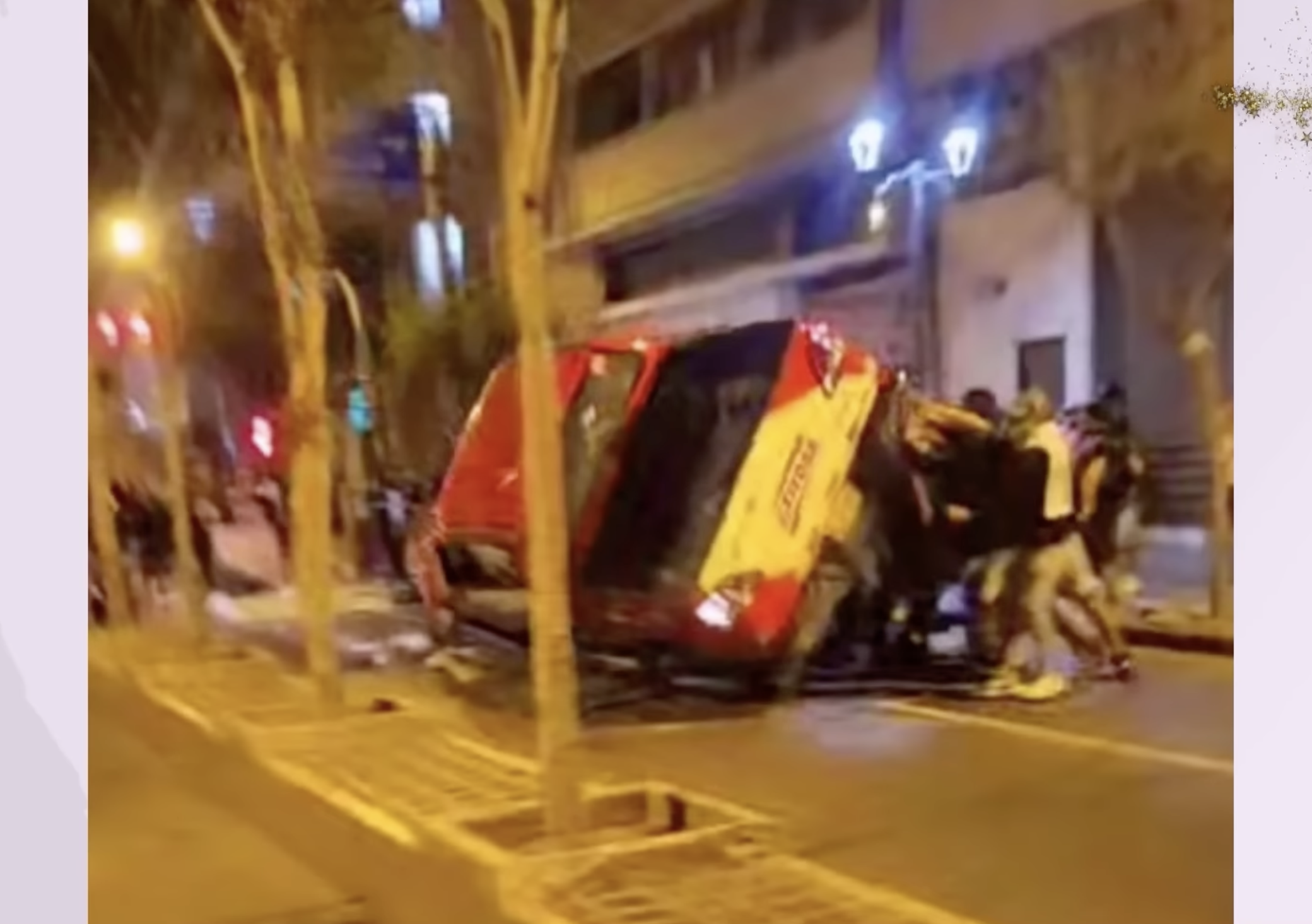 The mobile unit of Exitosa TV was flipped on its side after demonstrators attacked it and assaulted its driver. (Photo: Screen shot from YouTube)

That same day, the facilities of at least four news outlets were violently vandalized in Lima. A group of around 20 people arrived at the headquarters of Panamericana Televisión, threw stones at the windows and entered the building. According to images published on social media, the channel's lobby was partially destroyed. The aggressors managed to enter the area of the TV sets and the stones they threw reached the second floor, where journalists work. Subsequently, the group of people went to the headquarters of Canal N and América Televisión, where they carried out similar acts.

Also in Lima, that same night, a vehicle of the Exitosa Noticias channel was vandalized and its driver, Victor Nolly (who was inside waiting for his fellow reporter and cameraman), was beaten and insulted. In images transmitted on TV, a group of people can be seen swinging the car until it was flipped on its side.

"Thugs have attacked @exitosape. They have destroyed our mobile unit and beaten the driver who was driving it. This is not a peaceful protest," tweeted journalist Jesús Verde.

Faced with events of such magnitude, the condemnations and repudiation by society and human rights organizations were immediate. The Special Rapporteur for Freedom of Expression of the Inter-American Commission on Human Rights (IACHR), Pedro Vaca, expressed concern for the events and traveled to the country to closely observe the conditions in which journalistic coverage is carried out.

"I join in the concern regarding the security conditions for the deployment of journalists and in rejection of all violence that has been perpetrated in recent weeks. It is important to make an urgent call to the authorities to contribute to a favorable environment for public discussion," Vaca said in an audio shared during a conference of press freedom organizations on Jan. 10.

During the same event, the president of the ANP said the attacks against journalists represent a systematic behavior that goes back a long time and that this is largely due to the fact that there is no protocol in Peru to guarantee the safe practice of journalism.

"Our first request is that responsibility be assigned immediately [...]. We want a quick process of inspection, to know who was responsible [for each attack], so that they be punished in an exemplary manner to prevent these incidents from ever happening again. Also, it’s fundamental to establish as soon as possible an action protocol between the press and the police," Lainez told the 24 Horas newscast after the press conference.

For her part, Adriana León, head of the Press Freedom Area of IPYS, said the press has a fundamental role in the political and social crisis Peru is currently experiencing. She regretted that the media have not been covering the situation as they should. 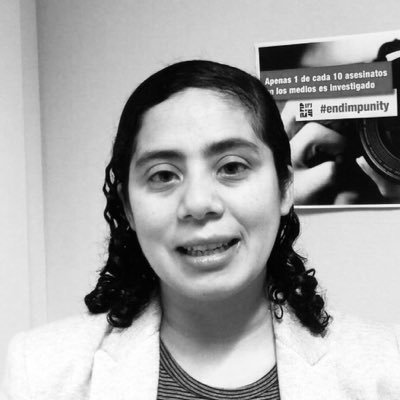 Zuliana Lainez, president of the ANP, said that the attacks against journalists in Peru represent a systematic behavior that goes back a long time. (Photo: Twitter)

Representatives of the Peruvian Press Council (CPP) met at the end of December with President Boluarte to ask her to sign on to the Chapultepec Index, a code of conduct where signing governments commit to guaranteeing respect for freedom of expression and press freedom above any law or act of power.

The president of the CPP, María Eugenia Mohme, said that she and other directors of the organization spoke to the president about their concerns for deaths during protests and for the physical integrity of journalists in the midst of riots. They asked her for measures so the press can carry out its work.

The Inter American Press Association (IAPA), on the other hand, expressed alarm at the dangers being faced by Peruvian journalists. They have been hindered in their work during news coverage due to aggressions, threats and theft of equipment, IAPA said.

"[We urge the authorities to] urgently activate their security and protection protocols to prevent journalists from being exposed to risks during their work," Carlos Jornet, chairman of IAPA's Committee on Freedom of the Press and Information, said in a statement.