Of the new outlets that have launched in Brazil in recent years, Projeto #Colabora stands out as having formed a network of 260 journalists spread across the four corners of the country. According to founder Agostinho Vieira, these collaborators are one of the main assets of the non-profit project, which is about to celebrate its four-year anniversary with projections of R $1.8 million in revenue. 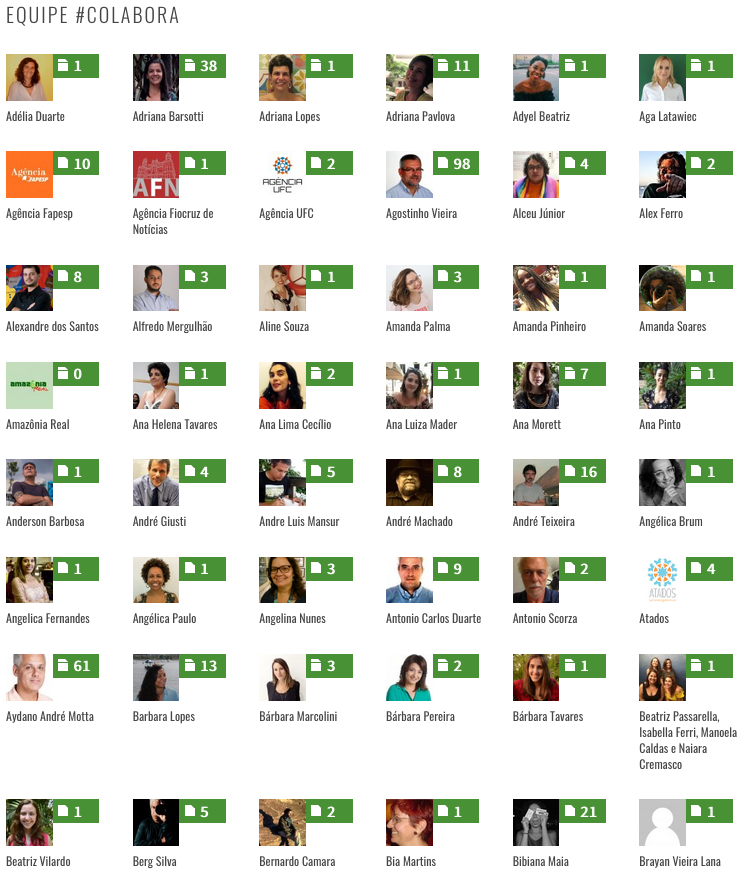 These are just some of the collaborators that write for Projeto #Colabora. (Screenshot)

“We have contacts from people who can eventually produce journalistic work anywhere in Brazil. If we need someone to do video in Piauí, we have them. An infographic maker in Maranhão, we have it,” Vieiria told the Knight Center. Also the project’s editor, he is a veteran journalist who spent more than 30 years in the traditional press and who has extensive experience in executive positions in large newsrooms, such as the newspaper O Globo and Rádio CBN.

#Colabora’s network began to form shortly before the birth of the site. The idea started a marketing play to draw attention to the launch.

“With one month to go until the launch of #Colabora (October 2015), we invited friends to write, photograph and film for #Colabora. It would be for the launch, justified by the name of the project. We had about 30 collaborations. From [journalist] Flávia Oliveira to the environment minister at the time, Izabella Teixeira. It turns out that what was supposed to be a one-time thing became routine,” Vieira remembered.

The result is that today the “who we are” section of the site, traditional in virtually all alternative media outlets and many start-ups, is much larger than most.

“People never left, and the initial 30 became almost 300 today, with the most different skills. About 10 percent work on a volunteer basis, without receiving anything from #Colabora,” the journalist said.

It is this network that reports not only for Projeto #Colabora, but also #Colabora Marcas, the commercial arm of the site that produces content contracted by companies for their websites and institutional projects. It is currently responsible for most of the site's revenue: as of July 2019, it accounted for 84 percent of the total.

Just like the network of collaborators, the branded content initially also was not in the site’s plans. #Colabora arose from Vieira's desire to continue the work he was already doing on his blog about sustainability and creative economy. For this, he called on two other journalists with whom he had worked: Valquíria Daher and Liana Melo, as reported at the time by the Knight Center. 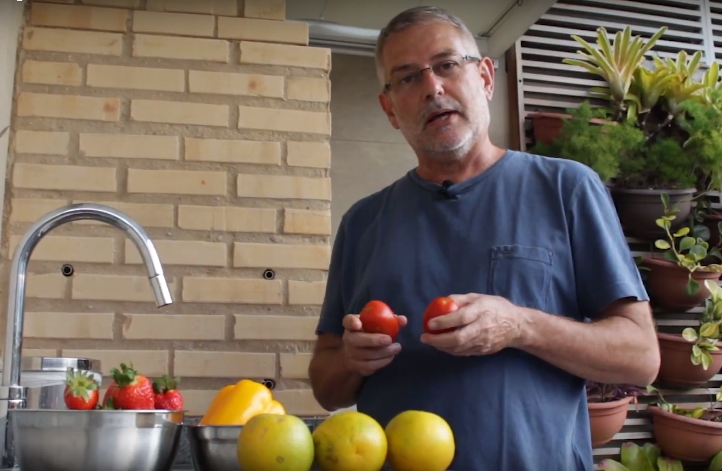 “This is the most important topic to be covered by the world today, especially when looking from the point of view of the SDGs [Sustainable Development Goals]. There is nothing more relevant than eradicating poverty (SDG1), Eradicating Hunger (SDG2), Quality Health for All (SDG3), Quality Education for All (SDG4), and all the other goals of sustainable development,” Vieira explained.

According to the site’s founder, the idea of putting up a website to produce reports on sustainable development seemed relatively easy, especially from a financial point of view. Contrary to what seems to be the experience of most journalists venturing to launch their alternative outlets, #Colabora hadn’t even published a single line of text when it closed on its first ad.

“We were just a PowerPoint presentation when we got our first contract from Coca-Cola. We soon discovered that it would not be so easy,” Vieira recalled. “Advertising is revenue that is decreasing in value for all media, whether it's #Colabora, O Globo, or The New York Times.”

Over time, reality imposed itself and he realized that he could not keep the site that way. The media market in 2015 was no longer favorable for big outlets, much less for journalism startups. That's when an opportunity arose. 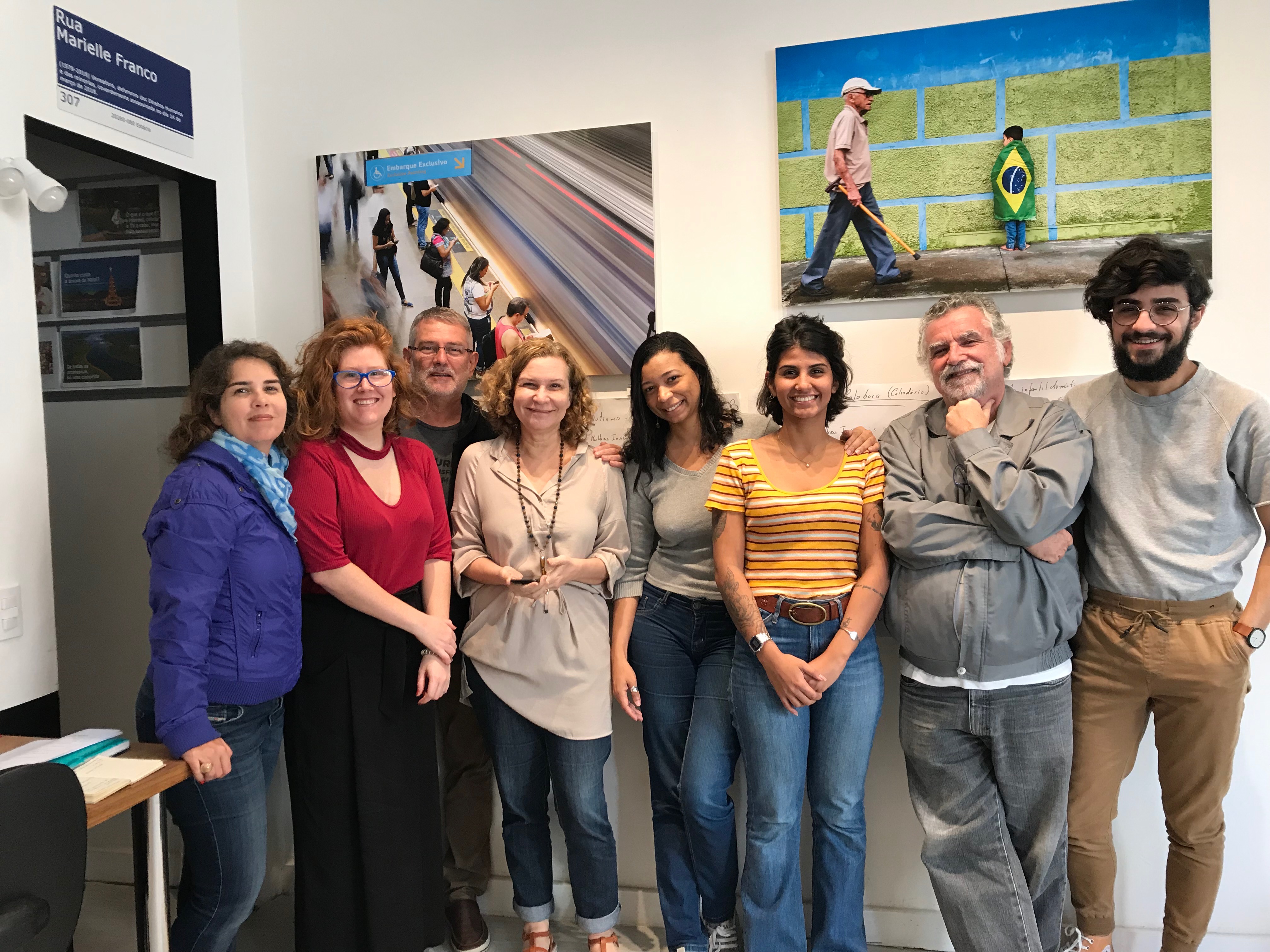 “Six months after [the site launch], content production for third parties emerged [as a source of revenue]. We were hired to produce an institutional website, also for Coca-Cola,” the journalist explained.

Other projects emerged as companies and institutions from different sectors, such as Enel (an energy distributor), B2W (e-commerce), and Apex (Brazilian Agency of Promotion of Exports and Investments), needed content on sustainability, Projeto #Colabora’s specialty.

From then on, the business model was consolidated and this was reflected in the site’s structure, which is now divided between Projeto #Colabora, which produces journalistic coverage of sustainable development, and #Colabora Marcas, which produces the content contracted by companies for their sites and institutional projects.

Surplus is reinvested in the site

According to Vieira, the site collected R $ 1.5 million (about US $360,000) in 2018, with a surplus of 8 percent. For 2019, the projection is R $1.8 million, with a lower margin of 5 percent, due to investments in the redesign of the site and the change of headquarters. All financial data is open and periodically updated on the website.

Considering the latest data from July 2019, content production for third parties generated 84 percent of a total R $124,804 of #Colabora's revenue for the month. Advertising accounted for 13.3 percent, followed by donations in the form of work (1.84 percent) and a small portion from readers' crowdfunding (0.83 percent).

Most of the expenses go to payment of staff (76 percent), administrative expenses (9.39 percent) and taxes (14.2 percent). In July, there was a loss of R $33,942.83. The month of August will also close in red, according to Vieira. But, according to him, this does not change the projected revenue of R $1.8 million in 2019, with a 5 percent surplus. As it is a non-profit outlet, all revenue is invested in the site itself.

However, there is still much to improve, as the site's founder explains: “Our inspiration was the Texas Tribune, which has sponsorship, foundation funding, advertising, and events like the Texas [Tribune] Festival. We did and continue to do events, but they didn't work out much. In crowdfunding, we are not good,” the journalist admitted.

Therefore, projected growth is related to new additions to the team. From the three people who launched the site (all journalists), they grew to 15, including three on the sales team and one specialist in metrics and audience engagement.

This is the case of Renata Fernandes, who, like Vieira, has a long career working in traditional media, but as an account executive responsible for finding and developing relationships with advertisers. After spending almost all of her career in the commercial department of newspaper O Globo, she now faces the challenge in a small journalism startup still little known to the general public. 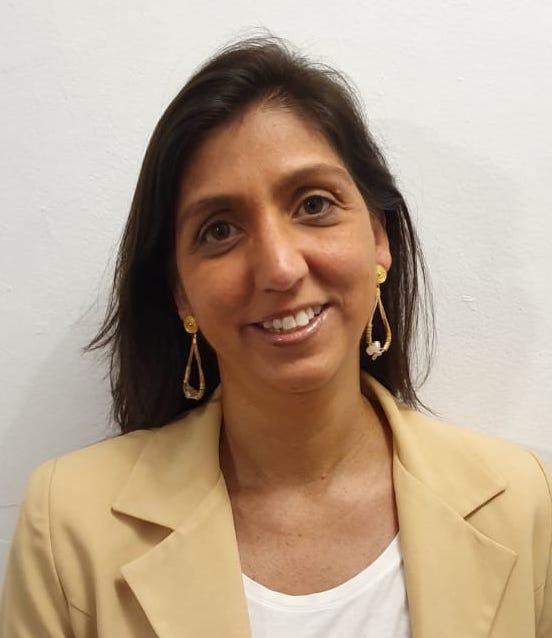 “Since we don't have a large audience, we are niche, selling just advertising is not my first option. I more so have to sell the concept of being in the environment with sustainability as a theme. There is also a bit of resistance because people do not know #Colabora. Most of the time, when I present, it is the first contact with the brand,” Fernandes explained to the Knight Center.

Since February, she has not yet made any sales or partnerships, but is optimistic about what can be done within the #Colabora framework.

“I still can't make a sale, I'm planting seeds, and that frustrates me a little. However, the little time that I’ve been here, Agostinho says that [the site] ‘made money with Renata’. It is a radical change in my routine. I worked 21 years in commercial at Globo, where everything is segmented and today I have more freedom. At the same time, in traditional media, the commercial part and the newsroom are more distant. We will never tell the newsroom what to cover, but if we know what they are doing, we can think of opportunities,” the account executive explained.

In line with the strengthening of #Colabora's commercial department, the need to better understand the audience and identify opportunities brought journalist Vivianne Cohen, a specialist in audience metrics and engagement, to the team. In addition to improving the site's numbers, she also has the mission of devising strategies to increase the number of readers who donate, which represented less than 1 percent of revenue in July.

Coming from the same traditional media as her colleagues, Cohen acknowledges that she has found a more positive and dynamic scenario in the newsroom of #Colabora, a journalistic site that was born digital. Even so, to become the reference in sustainability in the Brazilian market, there is a long way to go.

“The idea is to have the culture of metrics in both content production and distribution. How, through metrics, can we improve both audience and engagement, as well as the content that is produced. My role is to always see results quickly, and quickly change course,” Cohen told the Knight Center.

The redesign of the site and the hiring of people for other sectors not directly involved in content creation are also linked to two other changes put in place this year, according to Vieira. The first is the change of news desks to the 17 UN Sustainable Development Goals, approved by 193 countries. The other is the creation of the #Colabora reporting grant, with 125 entries and four winners, who will receive R $5,000 to produce their reports. Priority was given to proposals for reports that took place in a news desert, where there is no professional journalism.

“At heart, we have five big goals. To produce quality content, to broaden the share of mind, for people to think of #Colabora when they think of sustainability, audience and revenue. The fifth item is the purpose. We do journalism with purpose. We want this to happen here,” Vieira said. “Unlike the time I was from Globo, this is important. What is the legacy, the benefit to society? If you don't have it, the rest doesn't make sense.”