Two reports by press freedom organizations conclude that 2020 was the most dangerous year for professional journalism in recent Brazilian history.

The National Federation of Journalists (FENAJ) recorded 428 cases of violence against journalists, more than double the 208 cases recorded in 2019. The NGO Reporters Without Borders (RSF, for its acronym in French) identified 580 attacks on press professionals and media outlets in 2020.

Despite the different methodologies, in the two surveys, President Jair Bolsonaro, his children, ministers and the Presidency's Communication Secretariat appear as the main sources of the attacks. 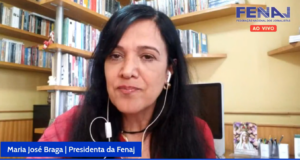 Maria José Braga, from FENAJ: “the Brazilian State, which was previously silent, is now the main aggressor.” Photo: screenshot from Facebook live video

In the FENAJ report, Bolsonaro was responsible for 175 cases alone (40.89% of the total): 145 generalized attacks against media outlets and journalists, 26 verbal attacks, a direct threat against a journalist, an attack on a TV station and two attacks on FENAJ itself.

The number of cases of physical aggression increased by 113 percent. There were 32 cases, 17 more than the 15 occurrences recorded in 2019. In almost half, the perpetrators of the attacks were ordinary people.

“We clearly identified Bolsonarism as being responsible for the explosion of physical violence against journalists. [It encourages] common people in everyday situations to attack journalists and prevent the exercise of their profession,” Maria José Braga, president of FENAJ, told LatAm Journalism Review (LJR).

One of the most serious cases was the attack on four journalists by Bolsonaro supporters during a demonstration in front of the Planalto Palace. They were assaulted on World Press Freedom Day. Photographer Dida Sampaio was knocked down and struck with punches and kicks. Colleagues who came to his aid were also attacked.

In FENAJ's assessment, the hostile attitude against the work of journalists is the first step towards physical violence. The organization recorded a total of 110 cases of verbal, virtual aggression, threats and intimidation in 2020.

Among the victims is journalist and university professor Felipe Boff. During the graduation ceremony of a journalism class at Universidade do Vale do Rio dos Sinos, in Rio Grande do Sul, part of the audience cursed, booed and threatened Boff, interrupting his speech that mentioned Bolsonaro's attacks on the press. The journalist had to be escorted out of the ceremony to prevent the threats of aggression from materializing. 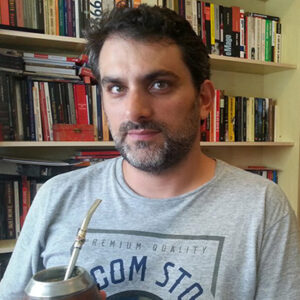 Felipe Boff: journalist had to be escorted after speech criticizing the president during graduation ceremony. Photo: courtesy

"The aggressive reaction on the part of the public only confirmed how urgent and necessary it was (and is) to denounce the attacks against journalists in Brazil, which were even more serious when committed by the President of the Republic," Boff told LJR. “I imagined that among the audience there would be some voters of his who might feel uncomfortable with what they would hear – after all, part of the speech was the report of facts, data and literal quotes from the president's attacks on the press – but never that they would try to prevent the speech of an honored guest, with shouting and cursing, as happened.”

“The Brazilian State, which was previously silent, did not take action. Now the Brazilian state is the main aggressor. It is a very complicated ritual. We know that we are at risk by going out to do our work,” Braga said.

RSF, on the other hand, mapped what they classified as the “Bolsonaro system,” which includes, in addition to the president, his three children that serve in elected offices, ministers of State and even the Secretariat of Communication of the Presidency of the Republic. 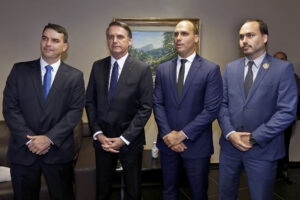 “...the hostility is not new, and reflects the way that he, his family and his immediate circle have, in the past year, refined a set of practices designed to discredit the media and silence critical and independent journalists, who they regard as enemies of the state,” the RSF report said.

RSF recorded 103 attacks by the president against the press and media professionals. He had the support of his three children: Congressman Eduardo Bolsonaro (208), Senator Flavio Bolsonaro (69) and Councilman Carlos Bolsonaro (89).

In its survey, the RSF also highlighted the persecution of female journalists: 31 attacks directed at female professionals, many of them sexist. Reporter Patricia Campos Mello, winner of the Maria Moors Cabot Prize in 2020, is one of the victims. She decided to sue the president and other officials for sexual innuendo. In January 2021, Congressman Eduardo Bolsonaro was sentenced for insulting her.

“The Bolsonaro system will undoubtedly continue to attack and smear the media until the end of Bolsonaro’s presidential term,” the RSF report said. “Brazil’s journalists will need a lot of resilience and courage to continue working and to reinvent themselves in order to recover the public’s trust.”