Black journalists in Brazil are a minority, rise in profession infrequently and earn less than white colleagues, according to study

For the first time, a quantitative study measured the prevalence of white and Black professionals in newsrooms in Brazil and the result reveals the breadth of inequality between journalists. The Racial Profile of the Brazilian Press shows that 77.6 percent of Brazilian journalists are white, while 20.1 percent are Black. The composition of the population shows that Black people make up 56.1 percent of the 209 million Brazilians, according to the Brazilian Institute of Geography and Statistics (IBGE, for its acronym in Portuguese).

“We always knew it was a white press, but we had no idea how white it was. Realizing that the Black population [in journalism] is less than a third of what it represents in the Brazilian general population is shocking. Because there really is no diversity in the newsrooms,” journalist Eduardo Ribeiro, director of Jornalistas & Cia. and Portal dos Jornalistas, told LatAm Journalism Review (LJR).

The survey was carried out through a partnership between Jornalistas & Cia., Portal dos Jornalistas, Instituto CORDA – Network of Projects and Research, and I’MAX. Researchers interviewed 1,952 journalists working in media in all Brazilian states. 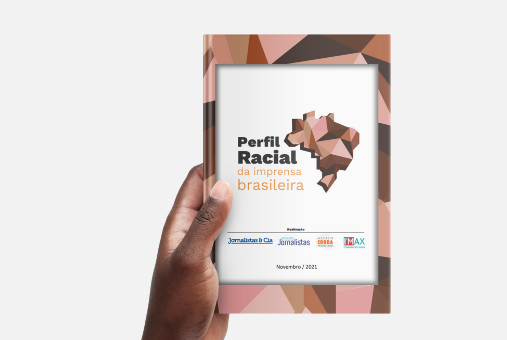 The first survey on the racial profile of the Brazilian press shows that newsrooms in the country still have a long way to go when it comes to diversity.

Conversely, 61.8 percent of white journalists who responded to the survey hold positions considered to be managerial in the newsroom, that is, editors, columnists, assignment editors, among others. On the other hand, 38.2 percent are in operational positions, such as reporter and producer. Among Black professionals, 39.8 percent hold managerial positions and 60.7 percent are in operational functions.

“[This] shows that, in addition to the proportion of Black journalists being much smaller than those in the population, those who are a minority also occupy, in a much less intense way, the positions of media executives, managers, coordinators,” Mauricio Bandeira de Mello, director and founder of the CORDA Institute - Network of Projects and Research, told LJR.

The unequal distribution of positions is directly related to the difference in pay between white and Black professionals. The survey reveals that 41.7 percent of Black journalists receive a monthly salary of up to 3,300 Brazilian reais (US $600), the lowest salary range in the survey. The percentage of white professionals in this pay range is 22.9.

Racial inclusion: A matter of survival

Racial Profile of the Brazilian Press comes at a time when journalism has been looking for ways to become more diverse. In 2021, Folha de S.Paulo, one of the country's largest newspapers, and Nexo, a digital native newspaper, launched training programs for Black journalists. The profile itself received institutional support from a variety of journalism-related trade associations.

“We got support that we couldn’t even imagine at the beginning. For the first time, in all these years that I've covered the [communication] sector, we managed to unite employer and employee around a cause. It demonstrates that everyone is interested in this discussion. So, it is a global theme, it is above party or sector passions,” Ribeiro said.

Despite the expanded debate on race in Brazilian journalism, racism is present in the lives of Black communicators. Fourteen percent of respondents said they had been victims of racist actions in the companies where they work and 57 percent had suffered racism related to their professional activity. Reports range from covert situations to cases of more serious harassment.

“I suffered prejudice in the newsroom. I worked 14 hours and was not acknowledged. I was told, 'Isn't that just in your head? Isn't that just an impression?’ It wasn't. The survey proves what we've been talking about for a long time,” journalist Camila Silva, who is currently coordinator of the Racial Diversity in Communication Program at Nexo, told LJR. “When we look at newsrooms, there was a great mobilization [recently] to hire and deal with the criticism received [because of the absence of Black journalists], … [but they are] interns, at the beginning of their career. In management and leadership positions, we don't see this change.”

At Folha, the diversity editor position has existed since April 2019 to expand the variety of voices and stories told by the newspaper. Journalist Flavia Lima is the third person to occupy the position, which was created based on the perception, now revealed by the survey, that journalism should offer a more diverse view of reality.

“It's important to follow up like this and change, to set goals and deadlines. It is necessary to make the newsrooms more diverse, more plural, not only because it is ethically or morally relevant, but because that can make journalism more relevant,” Lima told LJR. “It's a question of the survival of journalism. Are you going to keep talking to a small group of people? In terms of business, [seeking diversity] makes perfect sense. It's a powerful combination of pluralism, democracy, and survival.”