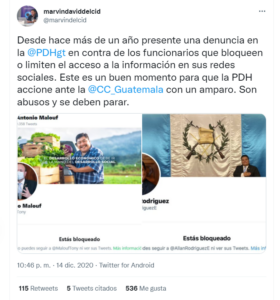 Social media has become an extension of public debate. There, information is shared, denounced, criticized and ideas defined. In addition, social media represents an opportunity for citizens to interact with their public officials and public servants in a more direct way.

It’s also a way, especially Twitter, for journalists to ask questions that can be uncomfortable for those in power. To avoid facing criticism for their actions, some politicians decide to block journalists or anyone who dares to reproach their behavior, violating freedom of thought and the right to access information.

A relevant case in Latin America, while not the only one, has been the government of President Nayib Bukele of El Salvador. Last Dec. 16, Human Rights Watch (HRW) published a report that identified the blocking of 91 accounts, mostly on Twitter, by the Salvadoran president and other government officials.

“Blocking users on social media seems to be part of a broader strategy by the Bukele government to silence critics and reduce transparency,” HRW pointed out.

The blocking of journalists on social media by authorities or public officials is a practice that has spread throughout Latin America. It has happened and continues to happen in a systematic way in other countries such as Venezuela, Guatemala and Mexico, while El Salvador has been one of the most studied and the one with the most recorded cases.

In the Latam Journalism Review (LJR), we talked to journalists from the region to learn about their experiences and ask about the consequences that these blockings have in their journalistic practice.

Bukele blocks journalists regardless of their nationality

Nelson Rauda, journalist for El Faro digital media, was blocked on Twitter by the accounts of the Press Secretary and the Presidential House in El Salvador. On both occasions he was able to make comments directly challenging their publications. “I believe it a function of journalism to contrast the information spread on social media by official sources,” Rauda told LJR. “Blocking is a way to keep us away from the conversation and to avoid having us journalists corroborate their propaganda,” he said.

Ricardo Vaquerano, journalist and research editor with extensive experience in El Salvador, has also been blocked on Twitter by the Bukele administration. He was blocked by the official account of the president @nayibbukele, the accounts of the Minister of the Environment and the Minister of Health, as well as the official accounts of both ministries.

According to Vaquerano, this type of blocking damages his work as a watchdog because it reduces his efficiency and possibilities of finding valuable information in order to investigate, contrast, analyze, deny or explain from the point of view of journalism.

“Although the @nayibbukele account is apparently a personal account, in reality, in practice, it is a State account used as a channel for government information. This includes laws that are enacted through it before they are issued by the constitutional mechanisms,” said Vaquerano in an interview with LJR.

"For example, at mid-morning on Saturday, March 21, 2020, the president tweeted a call to citizens for "those who are visiting coastal areas to return to their homes." He did not provide any more details. A few hours later, at 9:20 p.m., on the national network, he announced a quarantine and warned that, from that moment on, no one could go out on the street and that everyone was confined by force to the places where they first heard the announcement. And so it happened: that same night dozens of people were arbitrarily sent to centers where they were kept for weeks, without being able to even notify their relatives. When we read that morning tweet, we did not know that for the president it had the force of law and was mandatory," the journalist said.

The Bukele government not only blocks Salvadoran communicators on Twitter. The Venezuelan journalist Raúl Castillo was also blocked by the 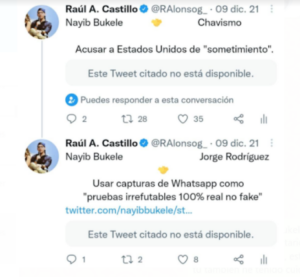 president. "Bukele published information on his Twitter account accusing the United States of interference, so I quoted the tweet and compared Bukele to Chavismo. It was a sarcastic and ironic tweet and he blocked me. Perhaps it also has something to do with me monitoring what is happening in El Salvador and publishing some reports from El Faro on my Twitter account about what is happening in that country,” Castillo explained.

Blocking has occurred for years in Venezuela and Guatemala

“Blocking initially occurred when journalists or citizens issued an opinion that the official in question did not like. As an organization, we do not have an up-to-date registry of officials who block journalists, but the levels of aggression have been increasing. We could say that, currently, they not only restrict, but also use this tool (Twitter) to attack,” Misle González, officer of the Espacio Público’s Media and Social Responsibility program told LJR.

Some journalists fall into self-censorship to avoid being blocked or attacked. Castillo told LJR that he has been blocked by Venezuelan candidates and politicians, but that he has tried to avoid the reaction of certain officials, such as Tarek William Saab, current Attorney General of Venezuela and former Ombudsman.

William Saab is considered by the journalists consulted as one of the officials who most blocks his critics on social media. “Tarek has not blocked me, but because I have been very careful not to comment on anything. Being a journalist in Venezuela, you may need information published by him, because he uses his Twitter as the official channel for the prosecution, and it is easier to have access to his publications without being blocked,” Castillo said.

In Guatemala it is also common for journalists to be blocked on social media by the authorities.

“Here it is quite common for high officials, deputies and party leaders to block journalists. I have been blocked by several, and it has happened to many of us over the years (with at least three different governments). It happens more often to those who challenge them the most on Twitter,” Enrique Naveda, a founding member of the Guatemalan news outlet Plaza Pública, told LJR.

In 2019, Marvin Del Cid, journalist and president of the Artículo 35 association, dedicated to promoting respect for freedom of expression in Guatemala, filed a complaint with the Human Rights Ombudsman of his country against officials who block or limit access to information on their social media.

“No official or public account should block or limit access to information. That includes all officials. So the vice president @GuilleCastilloR and the deputy @samuel_pz must unblock those blocked," published Del Cid on his Twitter account, on December 2020. He also said that his complaint to the Human Rights Ombudsman was already a year old and still nothing had come out of it.

Another country where this behavior by officials is frequent is Brazil. The Brazilian Association of Investigative Journalism (Abraji, for its acronym in Portuguese) identified, through a survey in March 2021, at least 174 cases of journalists blocked by Brazilian authorities on Twitter between 2014 and 2021. President Jair Bolsonaro is the authority figure who blocks the most, according to data analyzed.

In other countries such as Argentina, blocking is not considered systematic, according to journalists interviewed. "In Argentina, it is not so widespread. It seems to be more specific cases, which are a result of the political rift that exists,” Maia Jastreblansky, a journalist for La Nación, told LJR.

In the case of Mexico, journalists are protected by law. In March 2019, the Supreme Court of that country ruled that officials who have accounts on social media where they disseminate their official activities are prohibited from blocking citizens who receive their information this way.

Mexican justice ruled that Twitter is a communication channel between officials and citizens. This was in response to a complaint filed by Mexican journalist Miguel Ángel León Carmona, who on Oct. 2017 was blocked on said social media network by Jorge Winckler Ortiz, the then Attorney General of Veracruz.

However, blocking continues to happen. El País columnist Viridiana Ríos was blocked on Twitter on Jan. 4 by Sandra Cuevas, mayor de Cuauhtémoc, in Mexico City. This happened after the columnist started a Twitter thread analyzing the 2022 goals published by Cuevas.

On the other hand, in 2020, the Comptroller General of Chile resolved that if the authority “uses its personal account to deliver information before the institutional account or when it is obtained while being in office sharing information only through its private account , the account must be ruled by the same principles of openness, non-discrimination, transparency and publicity as the public body’s account, being, consequently, prevented from blocking users."

Despite these cases, in most Latin American countries there is no law that regulates this situation that threatens journalistic work.

“It is true that all social media users have the right to block anyone. However, public officials use these platforms as channels of official information. Blocking then becomes a restriction on freedom of expression,” Misle González said.