Brazil among countries where there is not a single non-white top editor across leading news brands, according to the Reuters Institute

On UN’s International Day for the Elimination of Racial Discrimination, the Reuters Institute for the Study of Journalism/ University of Oxford has published new research looking at the proportion of news editors that are non-white across 100 leading online and offline news brands in five countries (UK, US, Germany, South Africa and Brazil).

The study Race and Leadership in the News Media 2021 found that 15 percent of the top 80 editors are non-white. This compares to 18 percent in 2020. The cover highlights three prominent heads of newsrooms in South Africa and in the United States.

Despite widely recognized as a diverse country, Brazil appears in the report as one of the three countries where there is not a single non-white editor in the sample, along with Germany and the UK.  According to the research,  57 percent of its population identifies itself as non-white.

Looking exclusively at the 89 brands covered by last year’s report and again this year, 17 percent of the top editors are non-white in 2021, compared to 16 percent in 2020.

Among the 11 new top editors identified and coded among these brands, five are non-white. However, four of these are from South Africa alone. Across brands included in both 2020 and 2021 in the four other markets covered, one of seven individuals included for the first time in 2021 is non-white.

Combined with the new editors from the 11 new brands added to the list this year, there are 20 new top editors in total and, of these, 25 percent are non-white (the decline in the top-line figure reflects the fact that there were 30 percent non-white top editors among the brands included in 2020, but no longer on the list in 2021.

Comparing data on the demographics of the population as a whole with the percentage of non-white top editors in each market, the study has found marked disparities. 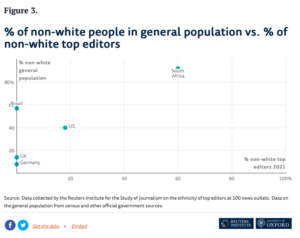 The U.S. also has a small number of non-white journalists (9%), but a larger percentage of non-white top editors (18%).

Regarding the numbers of South Africa, Ian Hughes, a British journalist who lives in the country and collaborates with MediaTalks, says that black editors dominate the mass media including TV & radio:

“The larger newspapers are exclusively edited by Blacks and that includes specialist journals such as the Financial Mail & the Weekly Mail & Guardian. An exception is the Daily Maverick with a mixed editorial board. White editors & journalists may well be concentrated in the smaller regional papers and in trade publishing” 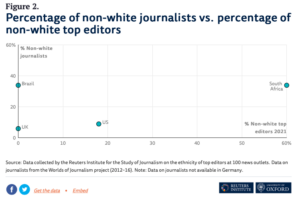 The research also explored the proportion of people in each country who access news from at least one major news outlet with a non-white top editor, based on data from the 2020 Reuters Institute Digital News Report. It revealed that the share of online news consumers who say that they got news from at least one major outlet (online or offline) with a non-white top editor varies considerably, with little change between 2020 and 2021.

Audiences in Germany and the UK still accessed no news from a major outlet edited by a non-white person in the past week, while audiences in Brazil now report getting no news overseen by a non-white top editor in the past week, according to the report.  In the US, in 2021, 42 percent of online news users used at least one source with a non-white top editor, up from 30 percent last year, and in South Africa, the figure remains 86 percent. 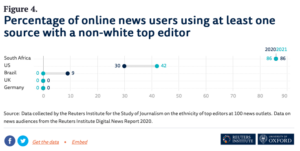 In each market, the researchers focused on the top ten offline (TV, print, and radio) and online news brands in terms of weekly usage, as measured in the 2020 Reuters Institute Digital News Report.

The authors highlighted, however, that some important outlets with non-white editors are not included in the sample (in the US, for example, the Miami Herald, which has Monica Richardson, a Black woman, as executive editor is not in the sample).

For each brand, the top editor was identified initially by checking official webpages. The individuals identified were double-checked by journalists from the market in question, as well as by academic partners and researchers The data were collected in February 2021.

“It is important to note, of course, that this does not mean the top editor is the only person who matters or, in fact, the most important person in terms of day-to-day editorial decision-making”, says the report.

“Race and racial discrimination work in complex ways not always tied to skin colour, for example where it has a religious dimension.

There are also dimensions of ethnicity that are not always related to race. However, a white/non-white conceptualisation captures some important aspects of this in the countries we cover. “

We, therefore, deploy a simple and reductionist, but hopefully still illuminating and relevant, binary, and code each top editor as white or non-white. Non- white is in no way meant to suggest an identity, let alone a homogenous group, given the great diversity and complexity of people’s identities, but it provides a way to categorise otherwise very different people who come from dominated ethnic and racial groups.

It helps us point to a dimension of inequality in representation at a macro level.”

Why this study is important

The authors say that top editorial positions in major news outlets matter both practically and symbolically.

“They are important because top editors are key figures in the leadership and direction of newsrooms. Moreover, who editors are matters for how news outlets, and the news media more broadly, are seen by the public.

These premises are central to our ongoing work studying diversity in leadership in the news media, both from the perspective of gender and race”.

The study highlights the role of the news media as part of the conversations about the issues raised by social movements like Black Lives Matter, structural inequalities in employment and healthcare access made further evident by the coronavirus pandemic, or the ongoing legacy of colonialism and imperialism and how we engage with our collective histories:

There are concerns that the media can sometimes miss relevant stories or perspectives related to these issues, in part because top editors experience and see the underlying concerns very differently from the people and communities most directly affected by them. This is why it is important to look at who the top editors are.

The authors highlighted in the conclusion that public criticism, professional and industry self-reflection, and surveys of news media leaders suggest there is a recognition in some quarters that the news media need to reckon with ‘who journalism isn’t serving’, and that part of that reckoning is about the frequent lack of diversity in the industry and profession itself, especially at the top.

In 2020, the Reuters Institute surveyed a strategic sample of 136 news industry leaders, and a majority recognised that their news organisation needed to address problems of ethnic diversity and named one or more initiatives already underway in their organisation to help do so.

When asked to identify the biggest priority in terms of newsroom diversity in the year ahead, a plurality identified ethnic diversity as the top priority, ahead of diversity in terms of, for example, gender or social class by a large margin. A clear majority of the respondents recognised that their organisations were not doing a good job with diversity at a senior level.

“This realisation is not new. Take the UK, where the Society of Editors in 2004 wrote that ‘changing the complexion of the newsroom is a fundamental challenge that will require commitment and a structured approach, driven consistently from the top’. Seventeen years later, it is not clear that the profile of top editors is significantly more diverse in terms of race than it was then. Change and turnover at the top is often slow, and even when it happens it does not always result in greater diversity.”

For the authors, the conversation – and the criticism – will continue.

“Will the pace of change increase? We will know more when we repeat this analysis in 2022 to track developments in race and equality among top editors across the world.”