Brazil, Mexico, Peru and Colombia among five countries with the most deaths of journalists from COVID-19, according to report

Brazil is the country in which the most journalists have died from COVID-19 since the pandemic broke out, with 295 cases. India is next in second place, with 279 deaths. In third, fourth and fifth place worldwide are Peru, with 199; Mexico, with 122; and Colombia, with 79, respectively.

This was reported by the non-governmental organization based in Geneva, Switzerland, Press Emblem Campaign (PEC), which works for the safety and legal protection of journalists around the world.

In an annual report published on Jan. 7, 2022, the organization detailed that during 2021 a total of 1,400 communicators died due to the coronavirus. That is an average of 116 per month, or about 4 a day. In total, 1,940 journalists have died from COVID-19 worldwide since PEC began its count in March 2020. 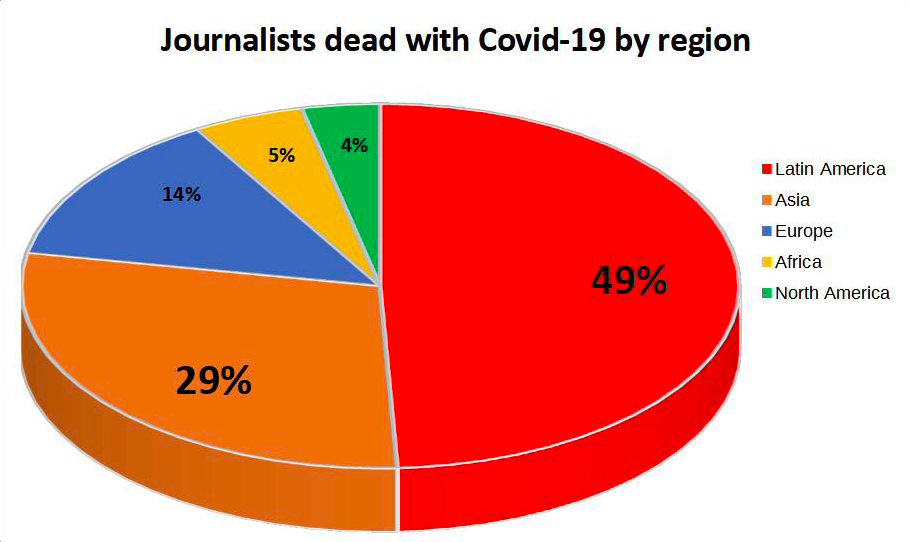 Almost half of the deaths of journalists due to COVID-19 in the world happened in Latin America. (Photo: Press Emblem Campaign)

Latin America is the region of the world with the most victims. Since 2020, there have been at least 954 deaths of journalists due to complications of the disease in the region, followed by Asia (with 556 deaths), Europe (with 263), Africa (with 98); and North America (with 69).

The Latin American countries with the fewest cases are Guatemala, with 11 deceased journalists; Nicaragua, with 10; Cuba, with 9; and Costa Rica and El Salvador, with three cases each. Two deaths were recorded in Chile, as in Guyana, while Barbados and Jamaica each recorded one dead communicator.

The report indicated that the 1,940 death toll is likely a low estimate and that around 50 cases are still being investigated worldwide. The organization calculates that the actual number of journalists killed by the virus is higher, since in some countries there is no reliable information or even in some cases, deaths are not registered.

"Sometimes, the cause of death is not clear and we need more time to include or not a death in our statistics," said Blaise Lempen, secretary general of the PEC, in an email exchange with LatAm Journalism Review (LJR). 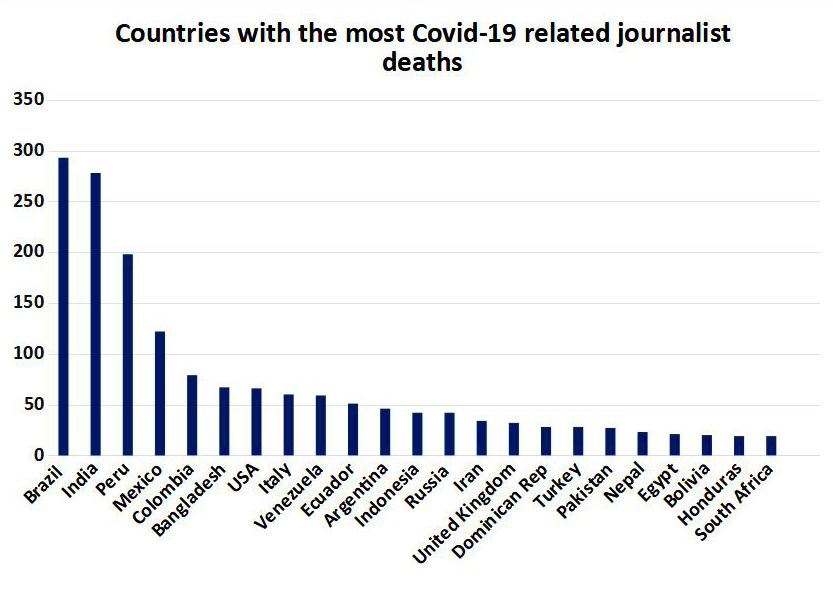 They foresee a slowdown in deaths in 2022

In the first half of 2021, there was an increase in the fatalities of journalists in the world due to the effects of SARS-CoV-2: 1,175 deaths, compared to the more than 500 registered in all of 2020. However, the number of deaths decreased in the second half of 2021, while vaccination made progress in most of the countries under consideration.

“The PEC expects this slowdown to continue in 2022, but is concerned about the high number of infections caused by the Omicron variant. It calls on all media workers to take necessary precautions, including booster shots,” the report said.

So far in 2022, three journalists have died of complications from COVID-19, according to the PEC registry, one of them in Latin America: Uruguayan Carlos Guerra, a radio and television journalist in the departments of Maldonado and Rocha.

On the last day of 2021, journalist Laudinir Lino, also an electronic media presenter, died in Brazil at the age of 64.

Since March 2020, the PEC has kept a count of the deaths of communicators due to COVID-19 on its website in order to pay tribute to them and put a name and a face to the figures. The records are based on information from local media, national journalists' associations, and PEC regional correspondents in 94 countries.