In celebration of the tenth anniversary of Brazil’s Access to Information Law (LAI, for its acronym in Portuguese), Fiquem Sabendo, a journalism agency specializing in access to public data, created WikiLAI, a platform for users to clear up all their doubts on the subject. The official launch took place on Nov. 18, the exact date on which Law 12,527/2011 reached a decade in existence after being signed by then-president Dilma Rousseff.

The legislation transformed access to public information in the country and ushered in an era of greater transparency, to the benefit not only of journalists but of the entire population. Although the Federal Constitution of 1988 assures citizens “the right to obtain information of interest from public institutions,” regulation in this area was only made official 23 years later.

One of the purposes of WikiLAI is to function as a guide for journalists and other researchers so they can file more and better requests for public data from all spheres and levels of government. It is organized in a wiki format, with entries that explain how it works, what kind of information can be requested, and how to write a request so that you have more chances of getting a response.

“We [at Fiquem Sabendo] receive frequent calls by people who are experiencing difficulty requesting access to information. Thanks to our experience, we are creating models for requests and appeals,” Maria Vitória Ramos, co-founder, and director of Fiquem Sabendo, told LatAm Journalism Review (LJR) about the request tutorials that are part of the WikiLAI entries. "Since our goal is that every Brazilian can exercise their right to access public information, it makes perfect sense to share what we've learned after thousands of requests and appeals.”

WikiLAI also has strong ties with the United States, conceived as it is with the goal of clarifying the purpose, context, stages, and ways of using the Brazilian law on access to public information. The project is funded by the U.S. Embassy and Consulates in Brazil, through the Annual Program Statement of the Press, Education and Culture Section of the U.S. Consulate General in São Paulo.

In addition, the inspiration for the Brazilian platform came from FOIA.Wiki, an American project developed by the Reporters Committee for Freedom of the Press with content about the Freedom of Information Act (FOIA). The U.S.’s Access to Information Act has existed since 1966 and allows requests even from foreigners. To reinforce these ties, WikiLAI has a section on FOIA, which contains details and trivia about that piece of legislation.

To support the explanations with real world examples, the WikiLAI entries use concrete cases of reporting made using LAI that has gained relevance in the national news. Taís Seibt, Fiquem Sabendo’s project manager who is responsible for the organization and editing of content of the new platform, highlights the investigations into ghost officials. In these reports, journalists requested time records of officials, and we were able to identify people who had been appointed to public positions and were not punching the clock. 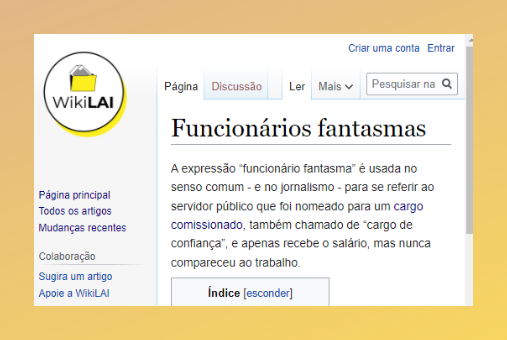 “This is information that any citizen could request, for example, to find out if a doctor is doing his duty correctly at the health center in his neighborhood or if he is missing work,” Seibt told LJR.

Among the specific cases quoted on the page are the 2019 report by Agência Pública on five former advisers to then-federal deputy Jair Bolsonaro (no party) who did not have badges and never even registered as visitors to the Chamber of Deputies. It also includes newspaper O Globo’s investigation about “ghost officials” in the offices of the current president and his children.

Another example of a concrete case, this one about scholarships and research grants, is the experience of then-journalism student Débora Sögur Hous, in 2017. Through the government’s transparency portal tool– used to monitor public resources – she discovered alleged Federal University of Paraná (UFPR) scholarship recipients who had above average grades, yet had no connection whatsoever with the university. The case became a report, was investigated, and resulted in the arrest of 29 people.

The launch of WikiLAI was accompanied by a virtual event with the participation of Michael Morisy, the founder and executive director of MuckRock (an organization specializing in FOIA); Fernando Rodrigues, founder, and director of the digital newspaper Poder360; and Samira Bueno, director of the Brazilian Public Security Forum, with moderation by Maria Vitória Ramos. At the event, Rodrigues praised the LAI as a civilizing norm “that has made Brazil a better country in these ten years.”

“LAI was the result of a great debate, which took many years to mature here in Brazil. In the beginning, they said that it was a law only for journalists to snoop on politicians, but we worked tirelessly to convince society and the three powers that it was a law for Brazilian citizens in general,” Rodrigues said. “It makes the country more competitive and modern, open to business and development. With LAI, anyone interested in having economic or sociodemographic data has an easier time requesting this information and making decisions that will certainly help the country grow.”

Although it's a Wiki project, WikiLAI doesn't work like Wikipedia, in that any user can create an entry and submit it for community review. In the coming months, however, Fiquem Sabendo intends to accredit partner organizations to edit and add entries, said the director Maria Vitória Ramos.