In 2017, the State of Pernambuco in northeast Brazil had the third highest number of violent crimes in the country. In the State, with 9 million inhabitants, 5,427 people were murdered last year, the highest number in 14 years, according to a survey conducted by site G1.

The data collected by G1 do not indicate how many of them were women. At the end of 2018, however, Pernambuco will know how many women were murdered in its territory thanks to the work of a group of journalists coordinated by Julliana de Melo, editor of site NE10, and Ciara Carvalho, a special reporter for Jornal do Commercio. 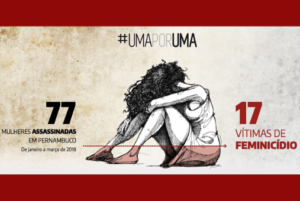 The project #UmaPorUma (#OneByOne), launched at the end of April, is dedicated to telling the stories of every woman murdered in the State since the beginning of the year. In addition to recording the deaths, they will monitor the progress of each case in court, covering the trial of the accused and the punishment of the crime.

The 26 journalists involved in the project, all women, work at outlets of the Jornal do Commercio de Comunicação (SJCC) system –the site NE10, newspaper Jornal do Commercio, Rádio Jornal and TV Jornal–, which supports and hosts the initiative. "The topic of femicide has always been in our daily lives," Melo told the Knight Center. "The feeling that each of us had is that we did daily coverage, but we did not follow up. It always felt like we could have done more. "

In October 2017, Ciara Carvalho produced the multimedia special “A culpa não é delas” (The fault is not theirs), about domestic and sexual violence against women in the State and the macho culture of victimization. The concern of Melo, Carvalho and other SJCC journalists on the subject led to the creation of #UmaPorUma earlier this year.

The project also counted on the company's design and statistics team for the development of the site and the treatment of the data, which are being collected by journalists from the cases published in the press and a cooperation agreement with the Secretariat of Social Defense of Pernambuco.

"We knew that if we continued with our media monitoring, we could leave some women out. We called the secretary of Social Defense to the newsroom, explained the project, and now once a month we receive official government data," Melo said. "They are more an indication that we are on the right track, because all of the investigations are done by us, since we could not wait around for the official data. And it is of great value, because we cross the data from our investigation with what comes from the official sources and we do not let any case pass.”

The premiere at the end of April included data for the first three months of the year: between January and March, 77 women were murdered in Pernambuco. The journalists identified each of them, presenting information about the crimes and the progress of each case.

On May 27, data will be published for the month of April as well as updates of cases from the first months. "Let's follow up: has the investigation been completed? It was. Did the prosecution file the complaint? Not yet. So let's stand at the foot of the Public Prosecutor's Office," Melo explained, adding that data analysis reports will also be published on the project website and in SJCC outlets. "It becomes personal to each of us, but it is done with endurance and with all the power of the [communication] system."

According to her, the work related to the first quarter of the year was carried out in a month, with the journalists dividing the coverage and the follow up for the cases. "We were negotiating and sharing the work. Even this is very positive: the project stimulated sorority among women in the newsroom. We have been helping each other a lot so that the final product comes to life," Melo said.

Each journalist will monitor their cases to the end of the year -–the project is expected to be closed in January 2019 with a balance sheet for 2018. The group that carries out the project and that today has 26 journalists should expand in the coming months, Melo said. "From the outset we knew we would work with an amount of information that I and Ciara or two or three people would not be able to handle. We estimate that by the end of the year there will be 300 deaths. We will not be able to get 300 women working on the project, but we will need many arms and a lot of breath to go until January 2019." According to the journalist, "there is the collective feeling of wanting to continue" beyond this date, but it is still early to assess whether it will be possible.

They intend for the consolidated data from 2018 that is processed by the project team to be made available to the public, with various filters such as color/race, age group and schooling of the victims. The first objective of #UmaPorUma, according to Melo, is precisely this: to disseminate verified information about violence against women in the State.

"It sounds simple, but it's not. The secretariat has this data, but they are not shared and there is this concern about continuity. When [the case] leaves the police station and goes to the Public Prosecutor's Office, it's as if no one else knows what's going on. We are making this continuity of information, the process, and we want to deliver this data to the population," she said.

The Instituto Maria da Penha, whose name honors the Brazilian who also baptized law nº 11.340/2006, against domestic violence, is a partner and consultant of the initiative and will collaborate with the journalists in the creation of a manual of good practices to improve coverage of violence against women.

"We are being very careful on the terms we are using, to see that the stories are being written correctly, not to repeat negative clichés," Melo said. "Police officers still speak of 'crime of passion' or 'crime motivated by jealousy.’ We know this is not correct when it comes to femicide, but the police officers say so and we still see our fellow journalists reproducing it."