At least eight Brazilian newspapers published an advertorial on Feb. 23 in which an obscure association of doctors defends the adoption of a so-called”'early treatment” of COVID-19, whose benefits are not scientifically proven. The decision of the newspaper companies to open space, albeit an advertising one, for the transmission of false information about the pandemic led to much criticism.

“Folha de S. Paulo and O Globo made a big mistake in accepting an early treatment ad in the main section. You can't criticize social media for spreading disinformation and do the same in a media outlet with editorial control. Sometimes the principles need to be worth more than the money,” Pablo Ortellado, coordinator of the interdisciplinary laboratory Monitor for Political Debate in the Digital Environment at the University of São Paulo, wrote on Twitter.

In addition to Folha and Globo, the two largest newspapers in Brazil, six others printed the advertorial: Jornal do Commercio, Estado de Minas, Correio Braziliense, Correio, O Povo and Zero Hora. The organization that signed the ad is the Associação de Médicos pela Vida (Association of Doctors for Life), whose website was unavailable throughout Tuesday and part of Wednesday. According to Jornal do Commércio, “the text has been signed by 2,113 doctors” in Brazil. 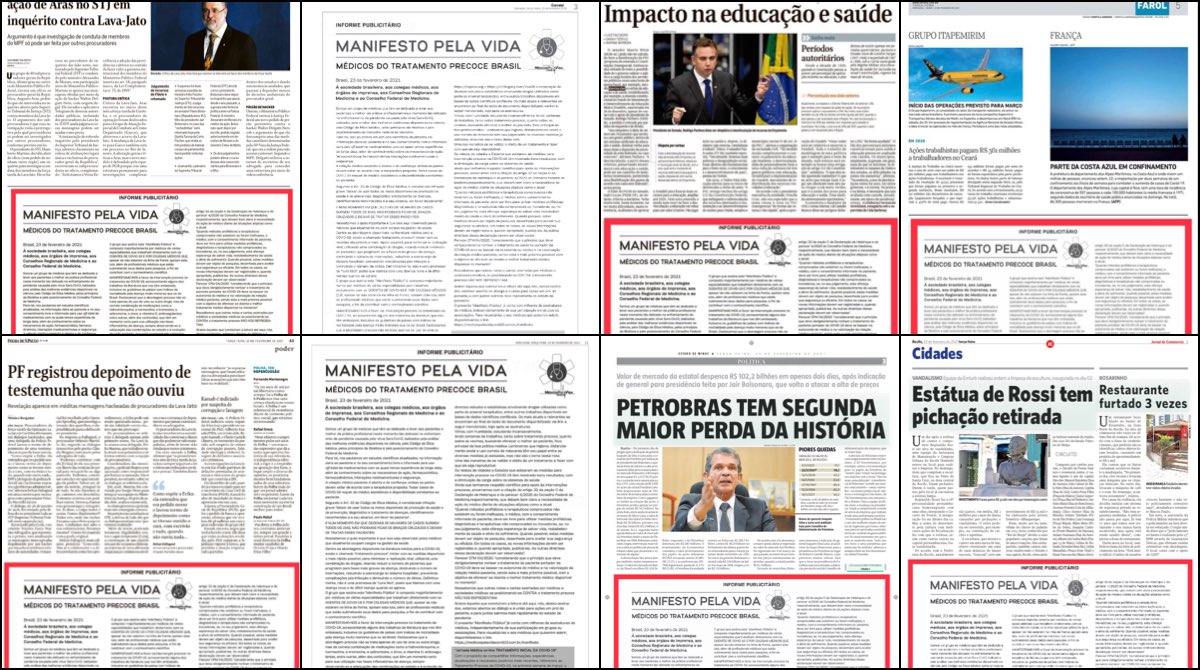 Fact-checking organization Agência Lupa published an article listing false information contained in the ad: “The text uses false information when citing hydroxychloroquine, azithromycin, ivermectin and other drugs as effective in patients with the new coronavirus,” the site said. "According to the professionals [doctors who signed the text], there is allegedly scientific evidence to prove the benefits of using these drugs, but there is no study of rigorous methodology that has reached this conclusion."

Lupa also wrote an editorial in which it recalled that it published 46 checks on the lack of proven effectiveness of drugs such as chloroquine, hydroxychloroquine and ivermectin against COVID-19.

“Newspapers are and will continue to be vital parts in the fight against disinformation, but they need, like social media platforms, to reject ads with lies even if it goes against their financial interests. The fight against false news cannot be just an advertising slogan. (...) False news should no longer be tolerated. Wherever it comes from,” Lupa said in the editorial.

The fact-checking agency Aos Fatos analyzed the sites where the studies cited in the advertorial were published and listed a number of problems, such as studies with no results and inconsistent estimates. "According to specialists who analyzed the content of the pages at the request of Aos Fatos, even greater criteria are lacking in the selection of material compiled by the sites,” the text said.

The editor-in-chief of Portal Drauzio Varella, Mariana Varella, criticized the newspapers' decision to publish the ads. The website she runs specializes in health journalism and, according to her, does not accept advertising for medical treatments without scientific evidence.

“We’ve lost money: there is a huge industry of natural treatments willing to invest in health websites. … With all due respect, it is necessary that outlets that commit to not spreading disinformation understand the seriousness of the health crisis that we are experiencing,” Varella wrote on Twitter.

In the newsletter of the Observatório da Ética Jornalística (Observatory of Journalistic Ethics, obJETHOS), from the Federal University of Santa Catarina, journalists and researchers Rogério Christofoletti and Dairan Paul wrote a harsh critique in which they compared the publication of the advertisement with false information to an old Brazilian TV program called “Topa Tudo por Dinheiro” (Take Everything for Money) in which the participants submitted themselves to unusual situations in exchange for a cash prize.

“Last night [Tuesday], Folha published an article about the ad itself. It said everything, except the reason that led it to display the advertorial ... In a schizophrenic way, the newspaper even went to ANJ [National Association of Newspapers] to be the source of the article and never reached out to the commercial department itself. Self-criticism? Not a chance,” the obJETHOS text said.

In an interview with LatAm Journalism Review (LJR), Christofoletti affirmed that the case reveals problems in the journalistic companies, such as the lack of apparent dialogue between the newsroom and the advertising department and the lack of criteria for publishing ads, prioritizing the financial issue over the informational character of the ad.

“Fighting disinformation seems to be just a slogan for some of these newspapers. They didn't bother to explain to their readers today why they made that decision. Together, these problems make the outlet's credibility crisis more acute,” Christofoletti told LJR.

In addition to Folha, Globo and Jornal do Commercio also reported on the controversial ad they published, but did not elaborate on the decision to accept the advertorial. To Congresso em Foco, the National Association of Newspapers (ANJ) said that it does not have a specific position on the case, but that "we naturally defend freedom of expression, which also applies to this note.”

Newspaper Zero Hora, the largest in the state of Rio Grande do Sul, sent a note to the website Coletiva.net in which it disclaims responsibility for the published content.

“Regarding the publication made by the association Médicos pela Vida on the early treatment of COVID-19, this Tuesday (Feb. 23), in Zero Hora, we clarify that it fits the requested form, that is, paid commercial publication made in a newspaper under the responsibility of the entity that signs the advertorial.