A meeting held in São Paulo in early December brought together communicators, press freedom groups and State representatives to discuss the threats facing the press, the measures the State is taking to fight impunity in violence against media professionals and next steps for launching a protection network for communicators.

The National Meeting for Protection of Communicators took place in São Paulo from Dec. 4 to 5 and was organized by the Vladimir Herzog Institute, Article 19, Reporters Without Borders (RSF, for its acronym in French), the Brazilian Association of Investigative Journalism (Abraji) and the Intervozes collective.

The event brought together about 50 people from 11 Brazilian states to deepen the debate on violence against communicators and to coordinate a protection network for these professionals that covers the country's diverse communication contexts, RSF's Artur Romeu told the Knight Center. 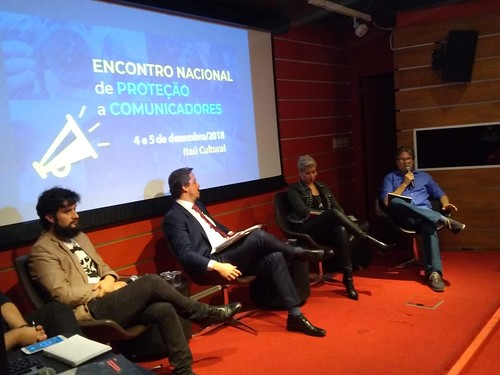 On the first day of the meeting, communicators from various regions of the country participated in thematic panels with members of the organizations and representatives of the State. Buba Aguiar and Gizele Martins, from Rio de Janeiro, Cláudio André, from Pernambuco, Cristian Góes, from Sergipe, and Valério Luiz, from Goiás, reported cases of censorship, criminalization, violence and impunity in crimes that targeted them as communicators.

"We presented the main violations we observed with first-person reports of emblematic cases, to personalize and create that identification, which worked well with the participants," Marina Atoji, executive manager of Abraji, told the Knight Center. "When we talk about censorship or criminalization, it seems like a very ethereal thing. But when we tell a story and place a name to it, it’s stronger."

State representatives, Atoji said, have brought "the vision of the State as the creator and executor of public policy." Participants included Carlos Weis of the Public Defender's Office of the State of São Paulo, Emmanuel Pellegrini of the federal Public Prosecutor’s Office (MPF) and Raiana Falcão of the Ministry of Human Rights (MDH) and general coordinator of the Program for the Protection of Human Rights Defenders, Social Communicators and Environmentalists.

Falcão explained how the MDH program, which in September began to include threatened communicators as recipients, works.

"Most of the participants [of the event] were popular communicators. They were simply unaware of the existence of the protection program and that they could benefit from it, "Atoji said. "Several were told how it worked in their state, which bodies to turn to, which was a very important contribution."

Pellegrini, a member of the National Public Security Strategy (Enasp) of the National Council of the Public Prosecutor's Office (CNMP), reported on a survey being carried out by the agency on judicial paths of journalists’ homicide cases. This survey is analyzing murders of communicators that have occurred in Brazil in the last 20 years - the maximum time limit for the prescription of the crime, Pellegrini explained to the Knight Center. He estimates that there have been 35 to 40 cases in the country during this period.

"We are doing a very analytical mapping, with date of the crime, if there is investigation, where is the investigation, if those responsible have already been criminally prosecuted, who are they, if the cases have been divided, if there has been a conviction, if they were acquitted," the prosecutor said.

The purpose of this survey is to identify the causes of impunity and provide elements for the Public Prosecutor to act to solve the problems identified in these cases.

"It's no use talking about impunity without checking where the causes of it are: are they in the investigation? In the process of criminal proceedings? Is there pressure on jurists or on a particular court? We need to check where the problem is, otherwise we will not be able to solve the fact that some cases go unpunished."

According to Pellegrini, the Public Prosecutor’s Office is in a "privileged place" to address this issue, since "only the prosecutor has access to both the investigative phase, since it is up to him to externally monitor police activity and demand that the police authority actually investigate that crime, and he has access to the judicial apparatus and can address the judge over that case."

The survey was initiated in the first half of this year and should be finalized by the beginning of March 2019. When completed, it will be published in a report and made available as a public database, establishing official statistics on impunity in homicides of communicators in the Brazil.

Pellegrini also spoke about the proposal for a recommendation to the CNMP, presented in May. to prioritize criminal prosecution in the case of crimes against life and physical integrity, and crimes of threat against journalists, press professionals and communicators in Brazil, which were committed while they were doing journalism or because of it. The proposal, endorsed by the president of the CNMP and Prosecutor General Raquel Dodge, has not yet been voted on by the body.

"It is a proposal that I believe will be approved, since most of the advisors are very sensitive to the issue. If approved, I am sure that this issue [of impunity] has everything to be substantially resolved, because it would be a big step forward," Pellegrini said.

This work has been carried out in a partnership between the CNMP, through Enasp, with the UNESCO office in Brazil, as reported by Abraji, and also has the objective of educating MP members on the importance of prioritizing the criminal prosecution of crimes against journalists.

"These cases are not 'just a homicide,’ they are a direct affront to freedom of expression. It's a way to silence the communicator, an attempt to silence that voice," the prosecutor said. 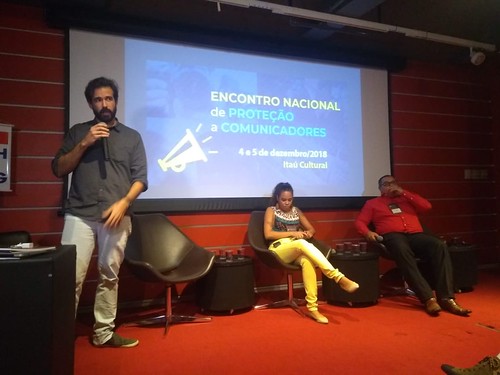 The main objective of the meeting was to "foster the creation of a network of communicators around this agenda of violence against journalists in the country," said the RSF representative. Goal achieved: on the second day of the event, working groups were formed among the communicators present, who will work together to establish the organization of the network and how it will operate.

The purpose of the initiative is to structure "a network of visibility, solidarity and response to cases of violence and violation of freedom of expression in the country that is more reactive, stronger, more organized, in order to have a force that can pressure, which is more structured and coordinated,” Romeu said.

According to him, the meeting brought together very diverse experiences of professionals who are dedicated to communication and journalism in different contexts and in different ways: "professional journalists who work in large newsrooms; people who have a hyperlocal Facebook page, who work with journalism tools and are dedicated to reports of human rights violations and state abuses; bloggers from Pernambuco; radio journalists from the interior of the Northeast," he said.

This diversity showed that the types of violence that affect a communicator in a favela in Rio de Janeiro, a radio journalist in the interior of Pernambuco, and a journalist from a major newsroom in São Paulo are different, they also vary depending on the identity markers of the communicator: gender, race, origin, Romeu said.

"The fact is that those who work on sensitive issues, especially at the local level, which involve stepping on the calluses of different power structures, be they political or economic, are often faced with potential reprisals."  And among those who participated in the meeting, this realization also helped to build a sense that they are not alone.

"They are not facing a problem at the individual level; we are talking about something structural, systemic in Brazil," the RSF representative noted. "Raising these questions also helps to feel the need for a response that is collective. Not everyone is trying to find a solution in their field, but rather trying to find solutions through political effect, visibility, pressure on public authorities, on the State, thinking of strategies to combat impunity; making a front and getting a collective response to this problem that is systemic.”

The idea is that this front, organized in the protection network, brings together communicators from all over the country, including those who are not especially dedicated to fighting violence against journalists.

Over the next quarter, the working groups established at the meeting will build a charter of principles that will guide the network's operations, Atoji explained. They will also think of "tools the network will make available to the communicators and to itself; whether we are going to have a website to receive complaints and make available the data we collect, "he said.

They will also decide which resources to make available to threatened communicators. "We think from the basis of establishing points where the communicators can take refuge when they are threatened, alternatives to displacement, to removing the person," said the Abraji executive manager. "We also think of security training for popular communicators, especially from digital security to physical security."

The groups should meet again in March 2019 to discuss the points worked on and launch the initiative officially. The network is open to all interested communicators, not just those who participated in the meeting in São Paulo. To find more information and join, just contact one of the organizations: Abraji, Article 19, Vladimir Herzog Institute, Intervozes, Reporters Without Borders.

But this network does not belong to these entities, Romeu explained. "It's really an attempt to get other organizations, collectives and communicators to get involved in this debate and take ownership of that initiative. Because if you do not have this ownership, [the network] dies on the beach," he said.

"People have to get involved with the subject. What we feel is that there is a lot of demand, if you recognize how important it was to make that debate at that moment, how a level of solidarity is needed, to understand the specific features of each organization and each different territory, with its characteristics. There is a clear demand and interest of this group to be more articulate, closer, to think of joint actions. How this is going to happen concretely is something that is going to be designed."