A policeman dressed in civilian clothes, wearing a bulletproof vest, shooting a firearm straight ahead, bullet casing flying from the weapon. Photojournalist Iván Orbegoso, on scene –in the northern Peruvian region of La Libertad– to photograph a protest against a proposed agrarian law, snapped this decisive moment that would eventually lead him to request the government issue guarantees for his life.

In late 2020, a proposed agrarian law that disadvantaged farm workers in Peru sparked a series of protests across the country. The police repression was violent and there were dozens of injuries and at least two deaths in La Libertad.

Orbegoso’s photo was immediately disseminated on social networks, national newspapers and internationally by the Spanish news agency EFE. The photographer had to go to the authorities in his region to ask for guarantees for his life because he started receiving threats from a couple of anonymous accounts on Facebook.

“The police were making the protesters retreat until they were taken to a more remote part, an open field, where everything was like a farm, near the Pan-American [highway]. That is where I hear the shots and I run and take the photo,” Orbegoso told LatAm Journalism Review (LJR), regarding the moment he took the controversial photo of the policeman firing.

The police were allowing live broadcasts, not photographs, said the photographer, adding that both the police and the protesters were aggressive towards the press at the scene.

After the threats, Orbegoso has been forced to change his routine.

“I have taken all the necessary precautions in the sense that the places, for example, where I used to eat before – because I am mostly on the street –, for example, I no longer go there. Or where I was going to pick up my car to go home, now I take another route. No longer the same as before. … Sometimes it does scare me,” Orbegoso said.

At first, the prefecture of the region of La Libertad denied Orbegoso the guarantees of protection for not being able to prove that his life was in danger. However, they later agreed and granted him protection. Zuliana Lainez, secretary general of the ANP, told LJR that the Orbegoso case sets an important precedent in Peru.

“There are several cases of journalists in Peru who have been attacked. Especially when it comes to cyberbullying issues, in which when they have gone to the prefecture to ask for guarantees, the argument is always the same, that since they do not present evidence that shows that their life is in danger, because they cannot identify aggressors with first and last name, they deny them the guarantees. That is why what has happened with Iván is going to serve as a precedent," Lainez said.

LJR tried to communicate with the Regional Prefecture of La Libertad, but did not receive a response.

The public prosecutor’s office managed to identify, through an expert assessment, and from Orbegoso's photograph, the police non-commissioned officer Víctor Bueno as the person responsible for the death of a worker who participated in the Virú march in La Libertad, on the day of the taking of the controversial photograph, as published by Peruvian newspaper La República.

In an interview with El Comercio, Interior Minister José Elice said he would meet with the high command of the Peruvian National Police (PNP) to clarify what happened between the police and the protesters during the protest in La Libertad.

“If what this photograph reveals corresponds to the truth, it is not only about a member of the PNP who should not have been there the way he is. He is seen using a firearm that does not correspond to these circumstances," the minister said, according to El Comercio.

Orbegoso's photo has been nominated for the National Journalism Awards convened by the Press and Society Institute (IPYS) of Peru and the Universidad Nacional Mayor de San Marcos in the categories of Journalistic Photography and National Grand Prize, Adriana León, director of the area of informative freedoms of IPYS, told LJR. 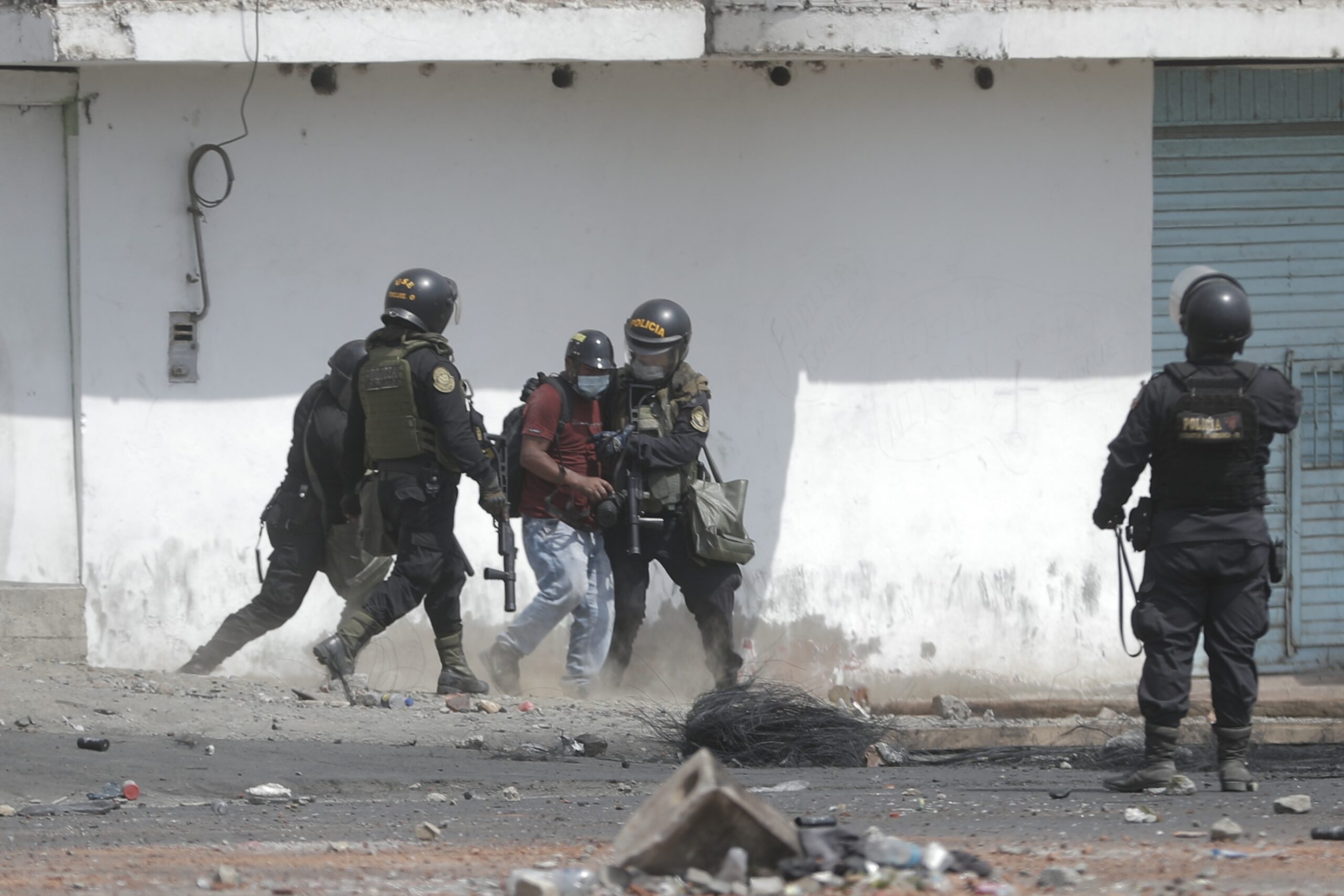 Peruvian photojournalist Iván Orbegoso being dragged away by police during a protest. (Photo: Renzo Salazar/El Comercio)

Orbegoso suffered damage to his work equipment in another demonstration in the series of protests against the agrarian law that the government was going to pass. Renzo Salazar, a photojournalist for El Comercio, caught a photo of Orbegoso being dragged away by police.

Salazar, who usually covers demonstrations, also recounted how the police always attack them despite being identified as the press. "Once, [in a demonstration] a police officer told me back off or I will shoot you ’… at that moment I lost all faith, all hope in that institution," Salazar told LJR.

Following the violent police repression in the demonstrations in recent months in Peru, the AFPP is organizing a series of informative talks on protection measures for photojournalists.

"In view of the fact that in the November marches the police had shot at several colleagues, we were forced to at least give a little training for the photographers within the organization," Jose Vidal, president of the AFPP, told LJR.

This first AFPP talk was given by Jesús Olarte from Agence France Presse (AFP), in which he shared the security protocols that agency journalists have at the international level. Among the advice given is going out in a group or in a pair to cover marches, using a helmet, a protective vest, high boots and a gas mask.

"As of November, the thing has made us reflect because there have been people who died, because the police shots have been direct," Vidal said.

The Office of the High Commissioner for Human Rights of the United Nations (UN), led by Michelle Bachelet, said in its report that in the protests that occurred between Nov. 9 and 15, the police violated international human rights norms and standards.

Journalists and media workers were affected by "restrictions, threats and attacks," which represented a deterioration in freedom of expression, according to the report.