*This article was updated.

A collaborative journalism marathon that involved about 100 people in Argentina – almost all of them women – and resulted in 13 reports published in 12 media outlets is about to be repeated in Colombia and Mexico to bring to light social issues related to human rights and social justice.

Between the last days of August and the first of September, the project Historias #EnResistencia (Stories #InResistance) published reports produced by 84 professionals –including journalists, designers, programmers and others. The articles dealt with social issues such as the situation of incarcerated trans residents, the migration of Venezuelan children and the importance of midwifery work in Argentina.

This collective effort began to be forged a little over a month earlier, on a July weekend in Buenos Aires, when the organization Chicas Poderosas gathered 100 people at Mediatón #EnResistencia. The collaborative marathon was the first held in the country by Chicas, an international network that seeks to foster the presence of women in digital media.

“This year in Argentina is an election year, so all journalistic coverage is very focused on politics and elections. The proposal of our megaton was to talk about these social problems linked, for example, to human rights, to gender, to children, to migration, to the environment, to indigenous peoples, to put them as topics for discussion,” Belén Arce Terceros, journalist and member of Chicas Poderosas and an organizer of the project, told the Knight Center. 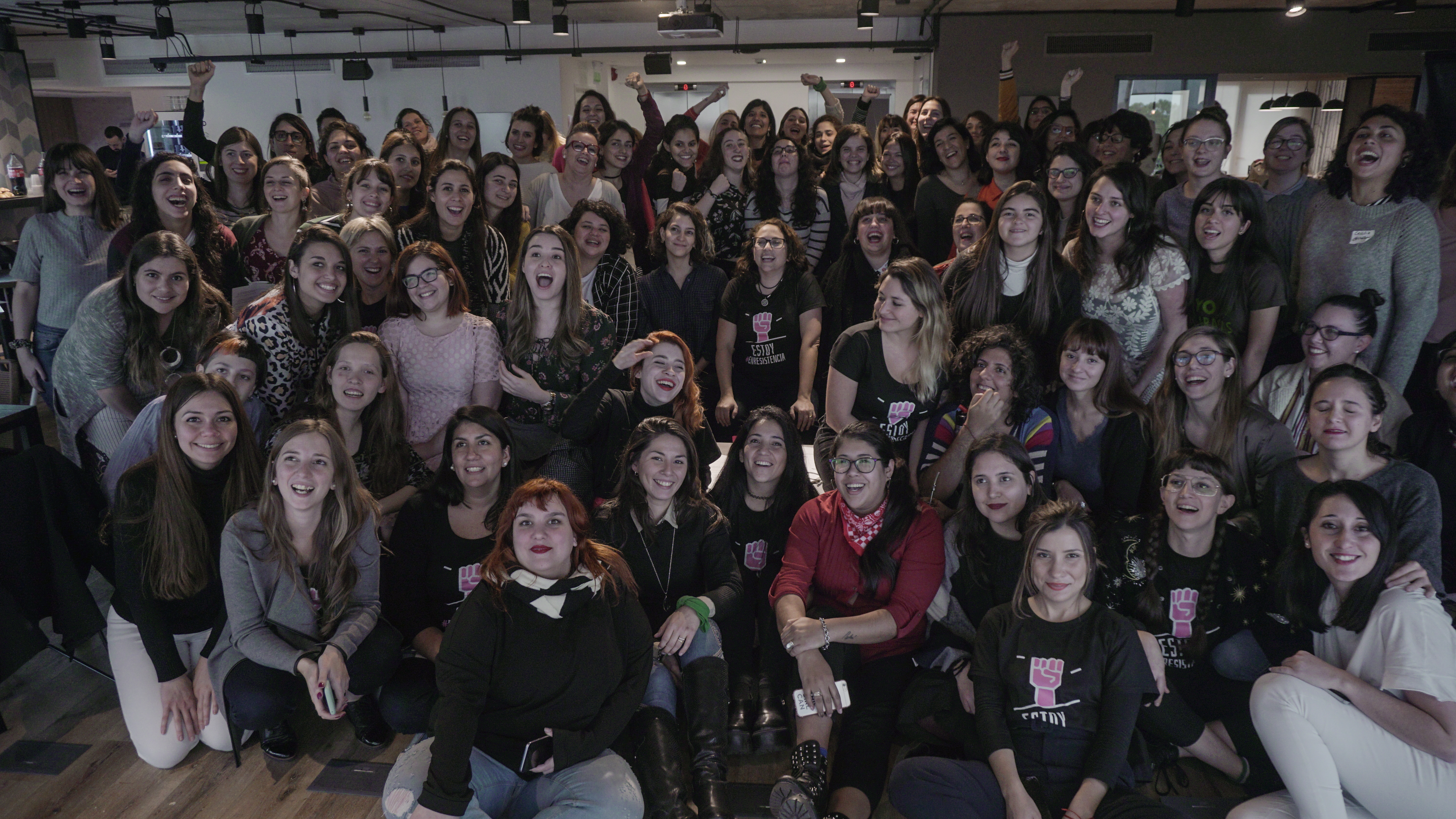 The participating professionals in the mediatón Historias #EnResistencia, held in Buenos Aires in July. (Courtesy)

The participating professionals were selected from previous registrations, based on criteria such as regional diversity and personal and professional trajectories. The event was structured so that they received training in skills such as video production and data visualization, for example, which would later be used in the production of reports. These emerged from presentations by 13 social organizations that spoke about the topics they worked with and that they considered underrepresented in the region's media.

The mediathon participants then split into groups according to the topic they would like to work on, and they were assigned mentors, senior journalists who served as editors and coordinators of the reports. The teams left the event with a schedule for the next four weeks, after which the projects had to be ready to be published in some digital journalistic medium, which had already been contacted by Chicas and agreed to participate in the initiative.

The end result exceeded the expectations of the organizers, as Gia Castello, also a journalist, member of Chicas and one of the mediathon's organizers, told the Knight Center.

“The idea we had was that 13 organizations come and if no one wants a topic, 12 remain. And then, if someone stays in the middle? Well, in the end 10 will be published. But there were 13 working tables where we had to go out to look for three extra mentors to accompany this process and in the end 13 stories ended up being published,” she celebrated.

Organizers said they sought diversity among the media invited to publish the stories. These include newspapers such as Clarín, one of the largest in Argentina, and Página/12, as well as smaller media such as Cosecha Roja and Revista Colibrí and regional websites such as Revista Late and Distintas Latitudes. “The idea was to try to reach as many people as possible,” Terceros said.

In Argentina, they are already planning another mediathon for May 2020, but the next marathon of collaborative journalism on the Chicas agenda will take place from Oct. 11 to 12 in Popayán, capital of the department of Cauca in Colombia. With the theme #TierraPoderosa (Strong Land), the idea is to bring together 100 local communicators to produce collaborative and multimedia reports on environmental issues and social leaders with a gender perspective and to publish them in journalistic media. Registration for this event is open until Sept. 26.

In November, there is the mediathon #VocesEnAlza (Rising Voices) in Mexico City, whose theme will be violence and harassment against media professionals. On Oct. 7, the first meeting related to the event will take place, which is open for registration. Supporters for the mediathon include Google News Initiative, Open Society Foundations, Meedan, United Nations Population Fund (UNFPA), and the United States Embassy in Mexico.

At Red/acción, one of the partners in the mediathon which has published three of the project's reports, general editor Javier Drovetto told the Knight Center that one of the reasons for joining the Chicas Poderosas initiative is that “the idea of communicating and making journalistic content in collaboration is a value for us.” “We are clear that we can do good journalism, but that surely it will be better journalism if we do it with someone.”

“In the particular case, we do not necessarily participate in the genesis of that journalistic content but we believed that we could add value at the moment in terms of how to present that content on our site and in our networks,” he said.

But not all media had this familiarity with collaborative journalism. “Many of the media, at the time of publishing the stories, said that their template for publishing the articles on the Internet had no space for more than one or, at most, two authors, but there were four, five, seven,” Terceros said in explaining that one of the impacts of the project was to take this format to media not yet used to working in this way.

The journalistic collaboration was not only new for some media, but also for 55 percent of professionals who participated in the mediathon and who had never worked collaboratively before, according to research done by the organizers.

Even with two decades of experience in journalism, María Fernanda Rossi had never worked collaboratively either – and the opportunity to do so was one of the main incentives for her to participate in the project.

“I have been working as a journalist for 20 years. I'm kind of old-school, so for me journalistic work was to go find a source, be at the desk, write the note, but do everything kind of alone,” she told the Knight Center. Rossi works as an editor for digital site Sur54, which produces regional coverage in Tierra del Fuego, Argentina's southern tip, and is one of six authors of the report “#MiCorpoNoEsElProblema” (My Body is not the Problem), published by Clarín.

Collaboration therefore presents challenges, and the first is learning to work with others, she said. “Understanding that one has certain vices and to be able to have the visions of other partners who are working on the same subject, who read, interpret in a different way; to be able to accept that different view, realize that you don't always have the truth in your hand or head and be able to accept that different view. And also understand that there were things that one did not know how to do, but they knew how to do the other and realize that we had to ask for help if something was difficult for us. That also is a big lesson.”

Journalist Guadalupe Sánchez Granel was also moved to register for the marathon for the chance to work collaboratively, as she told the Knight Center.

“Although I have been a journalist six years ago, I worked in different media, it is not the way in which work is usually done in the newsrooms. Sometimes in the newsrooms there are some opportunities, but they are few and I had never worked outside the newsroom, with other journalists I didn't know, and I was very attracted to the idea of being able to do a project with other professionals, Granel said.

She works as a web writer for the newspaper focused on economics and finance El Cronista, in Buenos Aires, and is one of seven authors of the video report “Y a vos, quién te cuidó?” (And you, who took care of you?), published by Revista Late.

“The most valuable thing is this experience of working with colleagues from different newsrooms, with different experiences and knowledge, and the fact of being able to materialize a journalistic work that also contributes to making a topic that is not on the agenda in Argentina visible,” she said. “It stayed with me that we have to do this more often, we have to leave our newsrooms more and seek to work collaboratively. Journalism is at a time of much change and much uncertainty, of transition perhaps to a new model. And it seems to me that journalism as collaborative is one of the premises that cannot be lacking in the coming journalism.”

*This article was updated to include information about the registration period for the mediathon in Colombia.