Pressure cookers at the core of a mostly still-underdeveloped urban area that compresses 22 percent of the city’s population, Rio de Janeiro’s favelas are home to many of the metropolis’ most pressing issues regarding sanitation, security, political representation and education. They are also the intersection of rich cultures and traditions that have become hallmarks of the city. 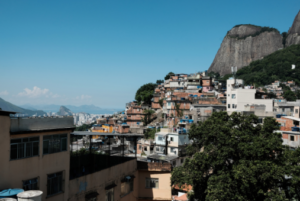 Nevertheless, traditional media tend historically to focus stories about these communities on armed conflicts between police and drug dealers, police brutality and general stories about misery and poverty.

“They [journalists] know that, depending on the zip code, favela residents might be portrayed in the traditional media either as an entrepreneur or as a drug dealer,” Claudia Santiago, a professor at Núcleo Piratininga de Comunicação (NPC), told LatAm Journalism Review (LJR). She has taught media literacy and lessons on community communication to dozens of the current journalists who were born in and whose work centers around favela themes.

“We [as favela residents] are traditionally shown mainly in the police section of the commercial newspapers, without name nor family name,” Gizele Martins, a veteran of community journalism in Rio, told LJR, adding that the stigma boosts the criminalization of Afro-Brazilians. In the favelas, 67 percent of the residents are Black.

This reality is one of the reasons that many journalists who live and work in Rio’s favelas work by the “nós por nós” (informally, Us, by Us) mantra, creating their own media initiatives with journalism by and for themselves. They do this in order to speak their own voice to their own people, those that traditional media –and the State – usually forgets.

Beyond this, they’re adapting and innovating when it comes to distribution, connecting with the community, and finding and reporting local stories.

Connecting in person and online

“I grew up reading newspapers that my dad, a janitor, brought home from work,” community journalist Michel Silva, who lives in Rio’s biggest favela, Rocinha, told LJR. That experience, along with his curiosity, taught him the structure of a news article. With this in mind, in 2013 he created Fala Roça (Speak Rocinha) along with his sister and others. According to Silva, if they had not done it, someone else would have.

Community newspapers, which are often distributed in person, provide an interesting glimpse into how the press can connect with its audience locally in a tangible way – even in the age of social media and transitions from print to digital.

“After the rise of the internet, a thesis emerged that communication would be free of limitations. We are now seeing with algorithms and ideological frames that it isn’t exactly like that,
said Marcelo Ernandez, a professor of Dialogic Communications at Rio State University who studies community newspaper distribution. “This discussion is actually more linked to politics than technology. You can have constructive discourse without it being necessarily attached to internet access.”

Silva sees this dialogue happening everyday while doing his daily chores or even distributing print newspapers alongside other volunteers.

“Door to door distribution is key. You do not see traditional newspapers doing that, so the residents became interested quickly,” he acknowledges. Through this interaction –a constant conversation between the community and journalists– residents pass along ideas for future stories. “The people are our thermometer.” 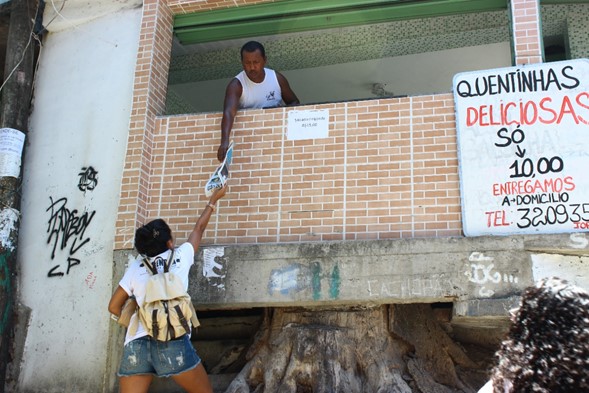 The exact number of newspapers that originated in Rio de Janeiro’s favelas is difficult to untangle due to their informal development and lack of research on the topic. Their impact, however, is obvious, at least at the local level. But, sometimes, it grows beyond the favela itself.

Michele Silva, Michel´s sister and a journalist, as well, remembers the piercing power of their local journalism when she recalled to LJR a normal newspaper distribution back in 2013.

After taking pictures while handing out papers, Michele was questioned a few weeks later by the family of a missing man that was shown in their photos. The man was the bricklayer known as Amarildo, who had been killed by state agents from the police pacification units.

“That’s when it hit me as to how our work could cross with the residents’ daily lives and how as I was not just a local, but a journalist as well,” she remembered.

Her brother pointed out that the photo circulated worldwide and helped counteract the initial narrative that Amarildo was close to drug dealers. Police officers had even tried to pin the murder on drug traffickers by bribing witnesses.

Stories like that, even though they are important, are not the bread and butter of community newspapers.

In addition to hard news, they also tackle service journalism, which is especially pressing in a community with nearly 6,529 commercial enterprises, according to the Economic Census of 2010. These commercial enterprises are generally informal and do not have a local or more formal way of marketing themselves inside their favela.

These stories go from big ventures, like the inauguration of a shopping mall, to individual entrepreneurs like Johnny Batidas, a smoothie barman that sells his drinks at São Conrado Beach.

Profiles of residents are also necessary to portray the often-overlooked oral history of the favela, shining a light on its rich tapestry of culture, stories and traditions. 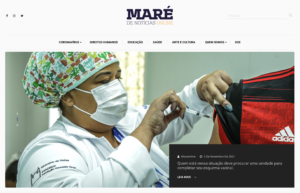 Newspaper Maré de Notícias (News from Maré) walks a path similar to that of Fala Roça. Inside Maré, one of Rio de Janeiro’s largest favela complexes (grouping sixteen communities), the community newspaper also has a distinct local approach, distributing its print version to 50,000 residents, free of charge and person to person.

Dani Moura, co-founder of the outlet, told LJR that internal research showed their newspaper was the main news source for numerous residents.

“There are many people who have no other source of information outside our newspaper,” she said, adding that their average print reader is above 45 years old.

Unlike Fala Roça, they have institutional backing from a known NGO, Redes da Maré, but the publication still has many of the same issues as other community media initiatives.

Due to historic lack of funding, even successful newspapers such as Fala Roça and Maré de Notícias have chronological gaps in the printing of issues, alternating between being fully online to releasing monthly or bimonthly issues to dilute printing expenses.

In reality, these print publications have a more restrictive reason for existing: Internet access is not universal nor cheap to get. While younger residents have been notoriously “super-plugged in,” connectivity is still in a grey zone. 3G and 4G Internet is inefficient in 43 percent of homes in favelas, according to Institute Locomotiva.

The same institute, during a live stream on the subject of telecom infrastructure, stated through its president, Renato Meirelles, that internet quality helps differentiate between those who are rich and poor in Brazil.

“In all our studies, either the lack of technology appeared as a problem, or technology appeared as a solution. Many of the favela residents have access to the internet when they are on the edge of the favela, not when they are at home. While the richest have computers in 83% of their homes, this number drops to less than 20% among favela residents. Everyone has smartphones, but 86% of those who have a prepaid cell phone, the plan ends before the scheduled period,” he pointed out.

The data is backed empirically, as Moura explained that there really are a lot of internet dead zones inside Maré. Even their newsroom suffered from bad connectivity. To solve this issue, they contracted a provider with experience servicing in Rocinha, luckily to remarkable success.

When the COVID-19 pandemic started in 2020, both connectivity and the physical newspaper became even more important, and sometimes a matter of life and death since the virus hit favelas harder than in 121 countries. To prevent further gatherings and close contact between the residents and the distribution team, Maré de Notícias decided to stop using the print version for a few months and, instead, used informative posters to reach residents, mirroring mural paintings. 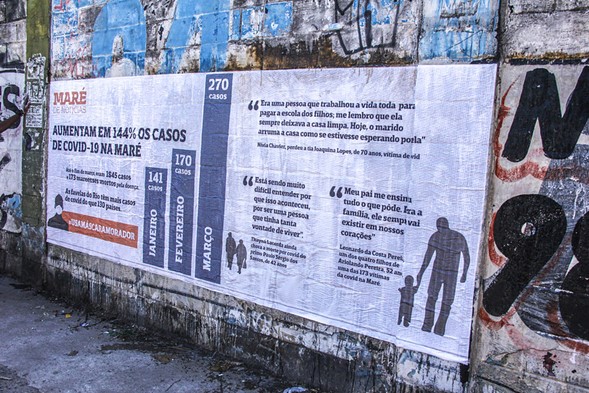 Lambe-lambe, a kind of poster, was used instead of the printed version of Maré do Notícias (Courtesy)

Another front of innovation is fact-checking. In October 2020, Agência Lupa, one of Brazil's most notable fact-checking agencies, partnered with Maré de Notícias in order to help find and stop the spread of fake news, especially during the COVID-19 crisis.

This expertise has also been used to clear disinformation in regards to police operations that blossom on social media, providing the locals (and the outlets) with a clear picture of what is actually happening inside Maré.

Another notable example of innovations provided by these newspapers are data investigations centered around favelas.

The crew at Fala Roça authored a story about how women without income have been the most affected by the pandemic in Rocinha due to the number of informal jobs – mostly domestic work – that were cut due to transportation restrictions. The story was based on data around donations handed out to the community by Fala Roça.

During the coronavirus crisis, Michel Silva and his colleagues also had the idea to check the vaccination numbers in Rocinha, especially the return rate. They found out that almost half the people that took the first shot did not come back for the second one.

This type of data-driven approach, however, does not focus only on stories about the pandemic. Structural issues are targeted as well. Michel Silva mapped all the trash cans distributed in the main road that connects Rocinha with its high-income neighbors. Rocinha had one, while the others had seventeen.

Community journalists who live or work inside Rio’s favelas, like the Silvas or Moura, walk a fine line when carrying out their daily work and encountering assumptions held by both locals and people from outside the community. 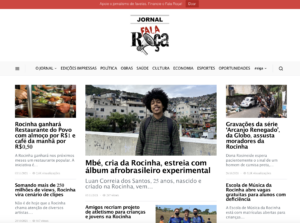 “Even residents are still not used to seeing journalists who live and work in the favela. So, it took a while for them to understand I was one. They always tend to imagine someone from known outlets,” Michel Silva said.

The 27-year-old reporter compares the reactions of fellow favela residents to those from colleagues.

“In many cases they [journalists from outside the favela] use us just to ask for help without considering that we are also journalists,” Silva said. “And many do not know how to differentiate one-time assistance from actual production assistance. Also, after their story is published, I am still at Rocinha, and they get to go home.”

“These professionals tend to circulate throughout the city, so they have a much broader and nuanced perception,” Theresa Williamson, founding executive director of an NGO that publishes watchdog news site and favela news service RioOnWatch, told LJR. She added that they should be prioritized in news outlets to guide new pitches.

This process is already happening. Moura is trying to boost new talents at Maré de Notícias through workshops and initiatives since many of its alumni end up headhunted by more traditional outlets.

“We definitely have a labor shortage in this area. Also, I have a tough time keeping some professionals for more than 6 to 8 months,” she said.

For Thais Cavalcante, a freelancer with a background in community-based newspapers whose work is published worldwide, the structure of community journalism made her a better journalist.

“My work was born out of collaborative work, the struggle for democratization of communication, writing with purpose,” she said. “I started with no money and no training. I recognized myself as belonging to the place I was born and lived because of journalism. I learned that it is possible to start practice before theory. I understood about the other, about the real meaning of the word empathy. I became more aware of reality, a better listener and with a more local outlook even if the impact of the news is national or global.”