The most recent murder is that of journalist Fredid Román, on the afternoon of Mon., Aug. 22 in Chilpancingo, capital of the state of Guerrero. Román was the founder and director of the weekly La Realidad and wrote columns for local media, including "La Realidad Escrita" in Vértice Diario.

Román, 58, left his office around 4:00 p.m. and boarded his vehicle when two men on a motorcycle opened fire on him. The journalist was shot at least four times, which took his life, according to La Jornada newspaper. 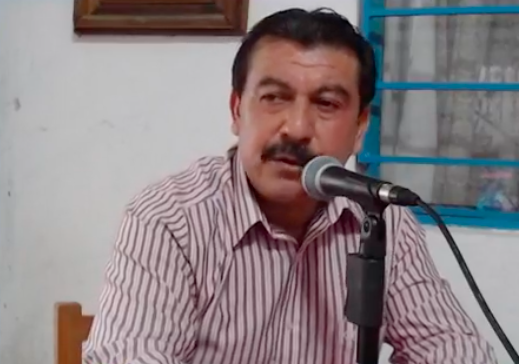 Fredid Román was shot at least four times outside his office in Chilpancingo, Guerrero. (Photo: Screenshot from Facebook Live)

Just a few minutes earlier, Román had published on his Facebook profile what would be his last column, in which he criticized the actions of President Andrés Manuel López Obrador in the investigation of the high-profile case of the disappearance in 2014 of 43 students from the town of Ayotzinapa, in the same state.

The Guerrero Prosecutor's Office informed in a statement that one of the first lines of investigation into the crime was related to the murder of Bladimir Román, son of the journalist, who was riddled with bullets on July 1 of this year.

On Tuesday, Aug. 23, Juan Esteban Román, one of the five surviving children of the journalist, informed on Facebook that his father would be mourned and buried a day later in the town of Buenavista de la Salud.

While violence against members of the media does not let up and national and international organizations cry out for justice and demand measures to protect journalists, the Mexican government insists on denying the violent reality experienced by the press in the country and has appears to be the main source of the aggressions.

In its semi-annual report, published on Aug. 18, the organization Article 19 pointed out that it is a cause for worry that President López Obrador describes the numbers of cases of violence against journalists as an attempt to hit his administration, thus deflecting the State's responsibility for the atmosphere of violence against the press.

"Far from taking on the State's obligation to protect, investigate, punish, repair the damage and, above all, prevent impunity from continuing to prevail in cases of murders against journalists, he denies that there is a scenario of profound violence against the press that must be urgently stopped," Artículo 19 stated in its report.

Another way in which the López Obrador administration denies the reality of violence against the press, according to the organization, is to dismiss the link between the crimes and the journalism line of work of the victims, who have also sometimes been blamed for their own murders.

However, just a few weeks later, the director of Monitor Michoacán, Armando Linares, was murdered. The authorities blamed the journalist for not accepting the protection measures offered to him after the death of his colleague Toledo.

Article 19 stressed that although there are possible links between the murders of journalists and organized crime, the Standard Protocol for the Investigation of Crimes against Freedom of Expression of the Attorney General's Office states that, in addition to investigating all possible intellectual and material authors of the crimes, the motive of freedom of expression and the journalistic work of the victims must be taken into account as the main axes of the investigations.

"The investigations into the murders of journalists are marked by the dismissal of their line of work with the crimes, by the re-victimization of the victims, and above all by the authorities’ refusal to fulfill the obligation they have both to protect and to investigate all homicides, whether or not they are linked to organized crime," reads the report. 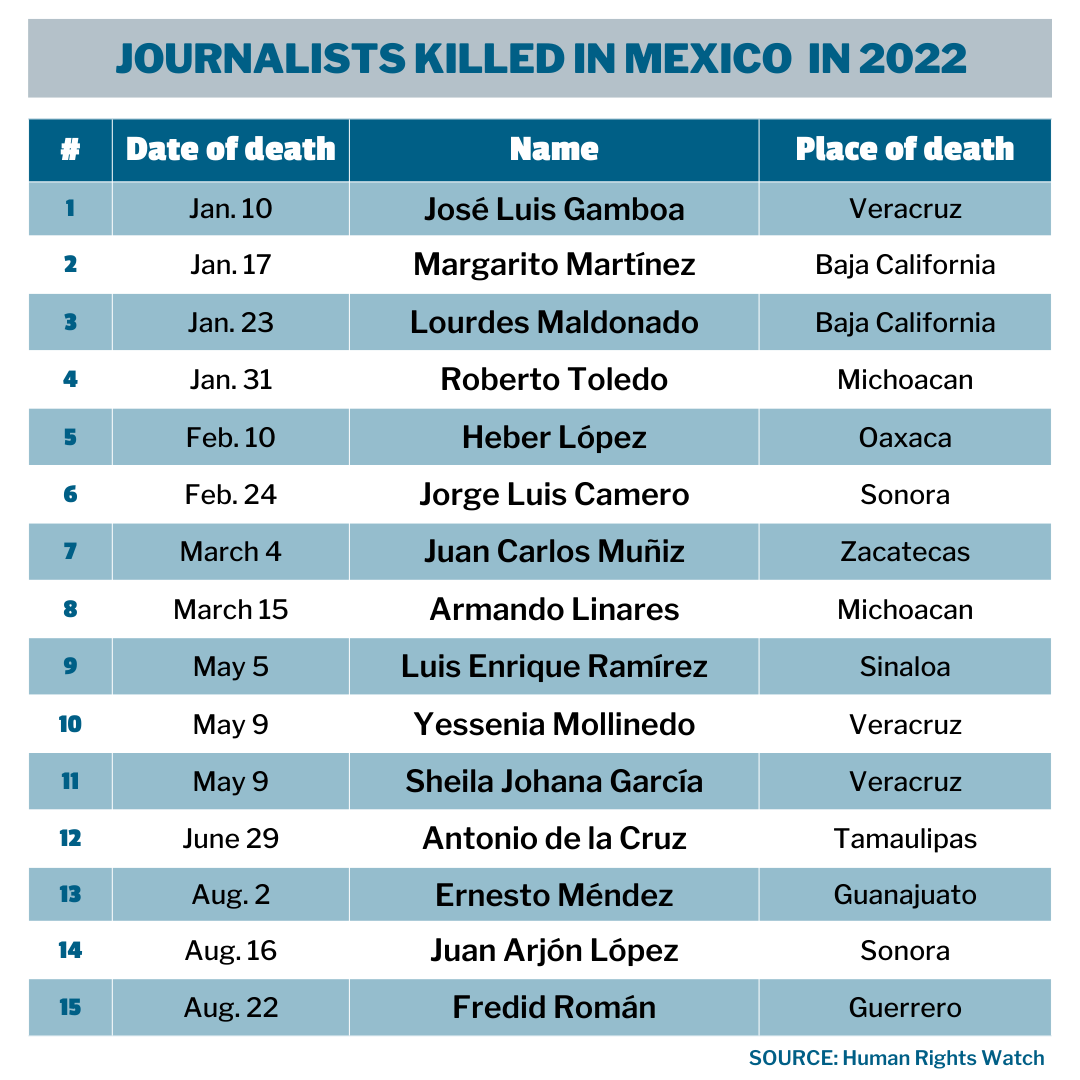 Such denial and re-victimization by the authorities can be clearly seen in the morning press conferences of the President of Mexico, particularly in the sections "Zero Impunity" and "Who's Who in Lies." In the former, the federal Undersecretary of Public Security, Ricardo Mejía Berdeja, presents every Thursday the advances in the investigations of cases of aggressions against journalists.

However, according to Article 19, said section has repeatedly disassociated journalistic work as a line of investigation of the homicides, revictimized the victims and disseminated information that is at odds with that of local authorities.

"The 'Zero Impunity' segment aims to equate arrest warrants, those accused or bound over for trial with justice. They take for granted that such advances by themselves are a sign of the reduction of impunity," according to the report. "The government informs on the murders perpetrated in 2022, without accounting for those committed during the rest of the six-year term and previous governments."

On the other hand, "Who's Who in Lies" is a section in which Ana Elizabeth García Vilchis, Director of Networks of the General Coordination of Social Communication and Spokesperson of the Presidency, denies alleged false news about López Obrador's government. However, for Article 19, the section is a space for stigmatization and disinformation in which media and journalists are attacked and disqualified.

In this regard, in February of this year, the special rapporteur of the Inter-American Commission on Human Rights (IACHR) for freedom of expression, Pedro Vaca, urged the government of López Obrador to cancel the section "Who's Who in Lies" for singling out and exposing journalists who are critical of the government and because it sends confusing messages about the authorities' intention to guarantee freedom of the press.

In the first half of the fourth year of President Andrés Manuel López Obrador's administration, 331 aggressions against journalists and media outlets were registered, which represents an increase of 51.83 percent compared to the same period of the previous president, Enrique Peña Nieto. This means that, on average, an attack against representatives of the press is registered every 14 hours in Mexico.

"In a country where the press is attacked every 14 hours for carrying out its work, stigma and disqualification only aggravate the hostile context in which the press carries out its work. This is in violation of the plurality of debate and tolerance of criticism and diversity, both essential for democracy," Article 19 stated. "The 331 attacks against the press recorded over six months clearly reflect the actions and omissions of the authorities to the detriment of the press. In this context, the authorities deny violence against the press, while at the same time they directly perpetrate aggressions against journalists and the media. In this sense, despite being one of the most critical moments for the press in Mexico, little action is in sight to combat impunity."

Prior to Fredid Román's murder, international organizations had already condemned the upsurge in violence against the Mexican press in recent weeks, marked by the murders of six media workers in two weeks.

On Aug. 9, 2022, journalist Juan Arjón López, originally from San Luis Río Colorado, in the Mexican state of Sonora, was last seen. Colleagues from the press in that state, citizens and social organizations searched for him for several days without finding him. Such was the echo of the disappearance reverberating on social media that the Sonora Prosecutor's Office began an investigation, even though there was no formal complaint. 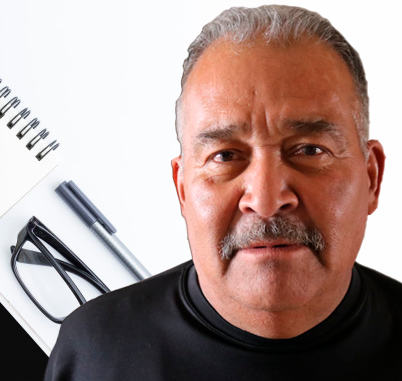 Juan Arjón was found dead and with cranioencephalic trauma, according to the Sonora Attorney General's Office. (Photo: Facebook of Juanito Arjón Informa)

On Tues., Aug. 16, authorities announced the discovery of the lifeless body of Arjón López, 62, near a highway. The journalist presented head trauma, according to the Attorney General's Office, which indicated he may have been beaten to death.

Arjón López became the 14th member of the press to be murdered in Mexico so far in 2022. Just days earlier, on August 11, four employees of a radio station had been killed amid organized crime shootings in Ciudad Juarez, in the neighboring state of Chihuahua. And in the same month, in Guanajuato, journalist Ernesto Méndez, director of the portal Periódico Tu Voz, was also shot dead.

Following the death of Arjón López, the Office in Mexico of the United Nations High Commissioner for Human Rights (UN-HCHR) urged to solve the murder and called for the victim's work as a journalist not to be ruled out as a line of investigation.

"The number of murders of journalists in Mexico is cause for concern," Jesús Peña Palacios, deputy representative of the UN-HR in Mexico, said in a statement. "One of the most efficient measures against repeated homicides and aggressions is the fight against impunity. That is, bringing both the material and intellectual authors to justice."

The organization highlighted the fact that Arjón López covered issues related to citizen complaints and police matters in San Luis Río Colorado for the Facebook-native media outlet A Qué le Temes [What are your afraid of]. Just days before his death on Aug. 2, the journalist had published what would be his last two articles, about the arrest of robbery suspects in his city.

"To achieve the punishment, respecting the guarantees of due process, against those responsible for these murders is fundamental for the journalist victims and their loved ones, as well as for all journalists and media workers, who through their work strengthen democracy and the rule of law," the rapporteur added.

The Consortium to Protect Journalists (CPJ) joined the call. The organization called on Mexican authorities to conduct a serious investigation into the death of Arjón López, bring those responsible to justice, and determine whether the events were related to his reporting.

"The tragic death of Juan Arjón López is the latest death of a journalist in a year that has become one of the most violent in the history of the Mexican press," said Jan-Albert Hootsen, CPJ's representative in Mexico, according to a statement. “The current climate of impunity continues to fuel these attacks. Mexican authorities must conduct a prompt and thorough investigation into Arjón's murder.”

The Inter American Press Association (IAPA) issued a statement on the murders of Allan González, a broadcaster with the MegaRadio group in Ciudad Juárez, Chihuahua, and of his colleagues Armando Guerrero, Lino Flores and Alejandro Arriaga. The organization said that these crimes highlight the state of terror in Mexico, which particularly affects the Mexican press.

"It is time for the government of President Andrés Manuel López Obrador to urgently establish concrete measures to stop the violence, the impunity of these crimes and to guarantee the protection of journalists while practicing their profession," reads an August 15 IAPA press release signed by its general president, Jorge Canahuati, and by its chairman of the Committee on Freedom of the Press and Information, Carlos Jornet.