Executive Branch has the most negative influence on free speech in Latin America, according to Chapultepec Index

The Executive branch appears as the most influential in situations unfavorable to freedom of speech and of the press in the Americas, compared to the Legislative and the Judiciary. This is what the book Chapultepec Index of Freedom of Expression and Press, released this Tues., June 28, by the Inter-American Press Association (IAPA) and the Universidad Católica Andrés Bello (UCAB), from Venezuela, shows.

The book analyzes press freedom in 22 countries in the Americas. In 15 of them, the executive branch, exercised by presidents, prime ministers, and their cabinets, accounts for the greatest negative impact on journalism. In six countries, the Legislative is the power that most threatens press freedom. The judiciary appears as the greatest risk in only one country.

This survey is part of the Chapultepec Index, which annually monitors, measures, compares and evaluates the progress and negative practices of the Executive, Legislative, and Judicial branches regarding four dimensions or variables: informed citizenship; the practice of journalism; media control; and violence and impunity.

“It is interesting to see how political changes, and in some cases the repositioning of rulers already in office, translate from one year to the next into accelerated processes of deterioration or improvement in the climate of press freedom. ... It is also alarming to see how some of the improvements that are detected are then shipwrecked when the same rulers face their first crises and vent their displeasure against the press, against the messenger,” Carlos Jornet, president of IAPA's Press Freedom Commission and journalism director of Argentina's La Voz del Interior, said. 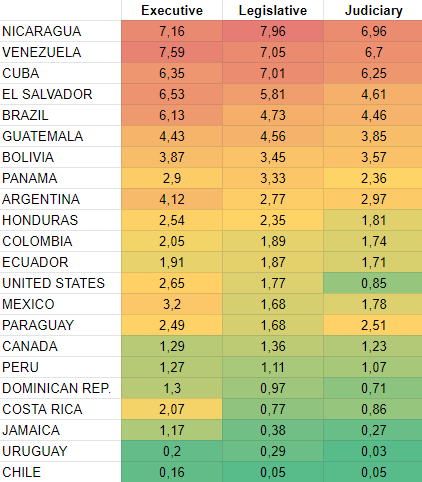 Venezuela is the country with the lowest level of freedom of press and expression in the Americas, according to the Chapultepec Index. On the executive branch, the National Telecommunications Commission (CNT, by its Spanish acronym) is the main body responsible for closing and sanctioning news outlets. The CNT also oversees editorial lines and has the power to grant and withdraw concessions.

A report by the United Nations high commissioner for human rights, Michele Bachelet, reports that the CNT has shut down at least one radio station and confiscated its equipment in the last year. In addition, six stations have been suspended and three programs taken off the air -- all critical of President Nicolás Maduro's government.

The Legislative and Judicial branches also play a relevant role in restricting freedom of speech and press in the country, either with rulings against journalists or laws that legitimize censorship.

"In Venezuela’s current political process there is no independence of public powers. The report on Venezuela, for both periods, details the contextual situations that allow us to visualize the actions. Complaints against journalists and the media that have been undertaken by high officials of the Executive, have led to unfavorable sentences for journalists and the media, among others that demonstrate the alignment of the State’s powers," León Hernández, coordinator and co-author of the book, told LatAm Journalism Review (LJR).

Cuba and Nicaragua, countries that together with Venezuela are classified as having no freedom of expression in the Chapultepec Index, also have poor indicators regarding the influence of state powers on journalism.

Nicaragua, under President Daniel Ortega, is one of the countries where the legislature, rather than the executive branch, has the most negative influence on freedom of speech and of the press. Congress passed the so-called cybercrimes law in 2020, which penalizes the publication of false information with up to four years in prison.

This country also has the worst indicator regarding the judiciary: The country's justice system has acted to persecute and intimidate the press like no other on the continent. In one of the most aggressive actions against the independent press, the country's prosecutor has subpoenaed at least 16 journalists as witnesses or people being investigated in an alleged money laundering case.

“The experts consulted attributed a greater unfavorable performance for freedom of the press and freedom of expression to the Legislative Branch. However, the difference in the high negative impact between both institutional bodies is not conclusive, with both branches showing a strong influence in unfavorable actions. In general, this is a nation that has experienced a deterioration of its freedoms, with restrictive actions in all branches of public power, including the signing of controversial laws,” Hernández said.

In Cuba, although the executive branch is associated with measures contrary to press freedom the most, the legislature has contributed to the same extent, as in the approval of Decree-Law 370/2018, which limits access to news sites hosted in other countries.

The book Chapultepec Index of Freedom of Expression and Press has more than 600 pages and brings detailed case studies of each of the 22 countries analyzed. It compares the data obtained in 2019-2021 and 2020-2021. It is available for free download here (in Spanish).

"The annual results of the [Chapultepec] Index, in addition to becoming a benchmark for journalistic information, point out the areas in which we must promote public policy reforms in the quest to strengthen press freedom and freedom of expression. We trust that this very important tool for defending freedoms and supporting democracy will continue to be active, be refined and enriched year after year. This is our commitment," Jorge Canahuati, president of the IAPA and executive president of the Opsa Group of Honduras, said.