In the most recent edition of the Chapultepec Index of Freedom of Expression and the Press, by the Inter-American Press Association (IAPA), the average of 22 countries evaluated on the continent rose 4.2 points. In 2021, the average of the indicator reached 55.6 points, compared with 51.4 the previous year, on a scale from 0 to 100.

The more positive overall picture comes with poor results from three of the largest countries in the region, Argentina, Mexico, and Brazil, which lost the most points in the ranking. 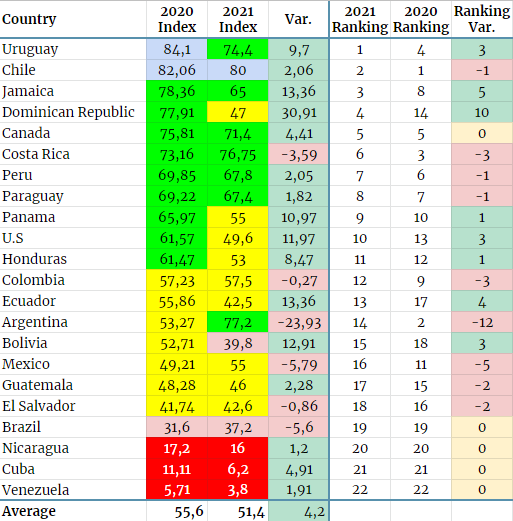 The worst result is that of Argentina, which lost 23.9 points and dropped 12 positions in the continental ranking. The country was ranked second the previous year and is now ranked 14th among the countries analyzed.

“The exercise of journalism in Argentina experiences a significant deterioration of its conditions during the period surveyed. On many occasions, the pandemic and the long quarantine imposed by the national government served as an excuse to curtail journalists’ freedom. To this was added the lawfare discourse instigated from high levels of government, the creation of regulatory agencies to allegedly fight disinformation, and the justice system as an element of intimidation and harassment,” the country report said.

A report by the Argentine Journalism Forum (Fopea, for its Spanish acronym) had already found a 41 percent increase in the number of attacks on journalists in the country in 2020. The SIP index covers the period from July 2021 to August 2020.

“The 2021 legislative elections may send a signal to the government regarding the need to moderate the confrontational discourse towards the media. Moderation in restrictions resulting from the pandemic will allow a normal level of journalistic activity to resume,” IAPA said.

In Mexico, the worsening is associated with the resurgence of violence against journalists. The country lost 5.8 points in the IAPA index and dropped five positions, occupying 16th place. The report criticizes the lack of concrete measures to protect journalists and guarantees for the exercise of press freedom.

In 2021 alone, seven journalists have been murdered in the country, equaling the number of cases in 2020, according to Article 19. The most recent cases are those of photojournalist Alfredo Cardoso, who died on Oct. 31, and of the director of Jovel magazine, Fredy López Arévalo, on Oct. 28.

In an emblematic case, Gustavo Sánchez Cabrera, director of Noticias Minuto a Minuto and Panorama Pacífico TV, had asked the Federal Mechanism for the Protection of Journalists several times for help in the face of the threats he had been suffering. But the promised support did not arrive on time and he was killed on June 16.

"The high levels of insecurity that exist in the country continue to affect the exercise of journalism and it is noted that some actions by the executive have a negative impact on the exercise of freedom of expression by journalists and other relevant political actors," reads the IAPA report, in reference to attacks by the Mexican President himself, Andrés Manuel López Obrador.

The report cites the mañaneras, as the morning press conferences orchestrated by AMLO are known. In them, he “disqualifies and stigmatizes the media, journalists...who publicly criticize the government's actions or point out its omissions,” it said.

Similar to Mexico, Brazil lost 5.6 points in the index, but maintained its 19th place in the ranking, just ahead of Venezuela, Cuba, and Nicaragua. According to the IAPA, the largest and most populous country in Latin America is going through a historic process of weakening of democratic institutions, including the media, which accelerated with the 2018 elections.

At the time, “then Federal Congressman Jair Bolsonaro, from the Social Liberal Party (PSL), won this contest by means of discourse with an authoritarian bias, the press being one of his favorite targets for attacks and slurs,” the report said.

The IAPA draws attention to the production and dissemination of fake news and the dissemination of hate speech on the internet and highlights that, in both cases, groups directly or indirectly linked to the President of the Republic are being investigated.

“The systematic action of organized groups to disseminate disinformation, control information flows, and fuel the subversion of the democratic order; the suspicion, under investigation, of the relationship between groups of this type and the Executive: It is under this scenario that threats by the Executive and episodes of aggression against journalists by Bolsonaro and his allies should be viewed,” the IAPA said.

Conversely, the Chapultepec Index records significant advances in press freedom and expression on the continent. The biggest positive highlight is the Dominican Republic, which gained 30.9 points in the index and moved from 14th to 4th position in the overall ranking.

In the Caribbean country, the advance is directly associated with the change of government that took place in August 2020, with the inauguration of President Luis Abinader, of the Modern Revolutionary Party, ending 16 years of government of the Dominican Liberation Party.

“Journalists critical of the government defeated

at the polls … witnessed how threats against them, issued by officials and followers of the previous regime, ceased to be a danger to their professional practice. This renewal that reached the congressional sphere and part of the Judiciary redefined the government media landscape,” the report said.

At the top of the ranking, only two countries are considered without restrictions on freedom of press and expression: Uruguay, which leads the survey, and Chile, which comes right after it. The two accumulate more than 80 points on the index. However, the IAPA warns of the precariousness of the work of Uruguayan journalists and the uncertainty about the Chilean constitutional process as potential risks to be observed in both countries.