Five renowned journalists in Latin America just launched a new journalistic project that seeks to use collaborative investigative journalism to explain phenomena that cross borders in the region.

The Latin American Center for Investigative Journalism (CLIP, for its acronym in Spanish), will tackle transnational issues like large-scale corruption and illegal or abusive practices.

“The idea of CLIP is to be, above all, at the service of Latin American journalism,” María Teresa Ronderos, one of the founders and director of CLIP, told the Knight Center. “We are going to lead collaborative transnational projects of investigative journalism, and we want to find the most qualified people to work on these things, but, we are also helping to support and develop those projects that other people are already cooking and that don’t have a guide, but that is purely collaborative. That's it.” 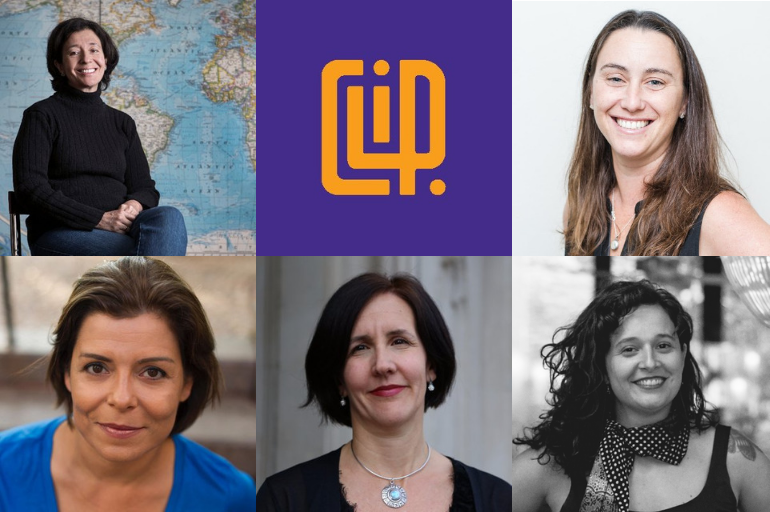 The founders of CLIP

They are award-winning journalists who have started their own independent investigative outlets, been honored with major journalistic prizes like the Pulitzer Prize and Maria Moors Cabot Prize and have been part of training and supporting colleagues across the Americas.

The idea of a Latin American investigative center emerged in 2015 during a journalistic workshop in Prague during a conversation between Walker, Ronderos and Segnini. They promised to come together and create the center when they had more time to dedicate to it. They called it “the Prague pact,” Ronderos remembered. When Ronderos left Open Society at the end of 2018, the journalists pledged to fulfill the pact.

Segnini told the Knight Center that, together with colleagues and other international organizations, they noticed that there was no place where the different aspects and stages of their journalistic investigations could be centralized. "There is no one like CLIP not because there is no one doing things, but because it is specific to look for patterns through the use of technology, along with allies…. We want to find more Lava Jatos,” she added.

“We really do not want to replace anything that exists but quite the opposite, we want to add to everything that already exists. There are people doing incredible journalism throughout the region and what we want is to work with them,” Segnini said.

The permanent CLIP team is made of Ronderos as director, García as manager, Rigoberto Carvajal as computer engineer specialized in database technologies and data science, and Colombian journalist Andrés Bermúdez Liévano.

Although the group has been working since May, CLIP launched its website on Aug.12 with a cross-border report in which it collaborated with 15 other media outlets from 13 countries in the region. "Transnationals of Faith" reports on the influence of evangelical groups on the elites of power in the countries of the American continent.

Ronderos said that this investigation began within the Columbia Journalism Investigations project of the Master’s program of Data Journalism at Columbia University, which is directed by Segnini. The CLIP, once it obtained funding from the Atlantic Foundation, began working on it, supporting the project, coordinating, editing, “making it happen” and offering them a platform where everything could be published, “despite the fact that the whole world publishes in its own media outlets,” Ronderos said. Some media partners began publishing in June and the rest in August, she added. 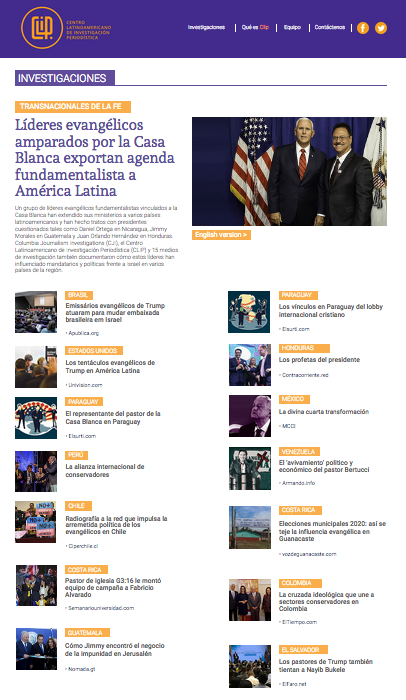 CLIP has published articles from the “Transnationals of Faith” cross-border collaborative investigation on its site. (Screenshot)

Emiliana García explained to the Knight Center that for the work of future collaborative reports that the team carries out, CLIP will have its own data center to store and share information from investigations.

On the one hand, CLIP has the editorial and investigative coordination part, which is the largest area, and on the other hand it has the database, which is still a work in progress. The idea is “to create a kind of common data center to facilitate investigations for Latin American investigative journalists who can enter there in the future and can easily find a lot of information in one place, so that it is data that can be used, which can be compared between countries,” Ronderos said.

For example, Segnini said, they are going to start “gathering information and open data from the entire region to extract and understand, and to see patterns in terms of administrative hiring and other indicators. This will be a service that we want to give to everyone who works with CLIP.”

CLIP's business model is based, in principle, on the funds provided initially by non-profit organizations such as the Atlantic Foundation and Tinker Foundation, but also on the creation of a ‘business arm’ that allows them to capitalize on their content.

As a fellow at the Tow-Knight Center for Entrepreneurial Journalism, García created an “innovative and attractive” business plan for CLIP that helped her think about marketing and leadership strategies. According to García, this business opportunity based on its content includes: the sale of products from data generated, such as selling reports to entities and institutions; a ‘data boot camp’; and negotiating the intellectual property of its content so that it is transformed into other products such as movies, books, television series, documentaries, etc.

Within a month and then early next year, Ronderos said, the center will publish two important cross-border collaborative reports with the support of the Organized Crime and Corruption Reporting Project (OCCRP).

Collaborative and cross-border research reports "are not important, they are indispensable!” Segnini said.   “You can no longer investigate as we did before, the lone wolf, is a waste of everything, of resources.  To begin with, the complete picture is not seen, (...) all the great cases of corruption that we know, and that are increasing, have the same behavior, that is, there is a recipe and a pattern that they replicate,” she concluded.