A guide recently launched by the organization Health Care Without Harm aims to provide tools for journalists in Latin America to include the perspective of public health in coverage of climate change. It’s an urgent topic according to the World Health Organization (WHO), which estimates that up to 250,000 deaths may occur between 2030 and 2050 due to health problems associated with climate change. Most of them in emerging economies, such as those in Latin America.

“Historically, in the media, the treatment of environmental issues was marginal and sporadic, so the media were not a ‘school’ of these issues either. This lack of knowledge also has an impact on editors not knowing the dimension, importance and impact of these challenges and not including them on the editorial schedule,” the journalist told LatAm Journalism Review (LJR).

Profeta, who is also a professor at the Universidad Nacional de Avellaneda, in Argentina, wrote the section of the guide on data journalism. In it, he lists a series of databases on climate and health in Latin America that can serve as a basis for investigations on the topic.

“In addition, it is valuable that it is a product in Spanish, when many resources of this type were created in English and, in addition, it was created with a Latin American perspective by Latin American journalists specialized in these topics,” Profeta said. “Without resources like this - and specific training, for example - it is very difficult to understand and to have tools to address the multidimensionality of environmental challenges in general and climate challenges in particular.” 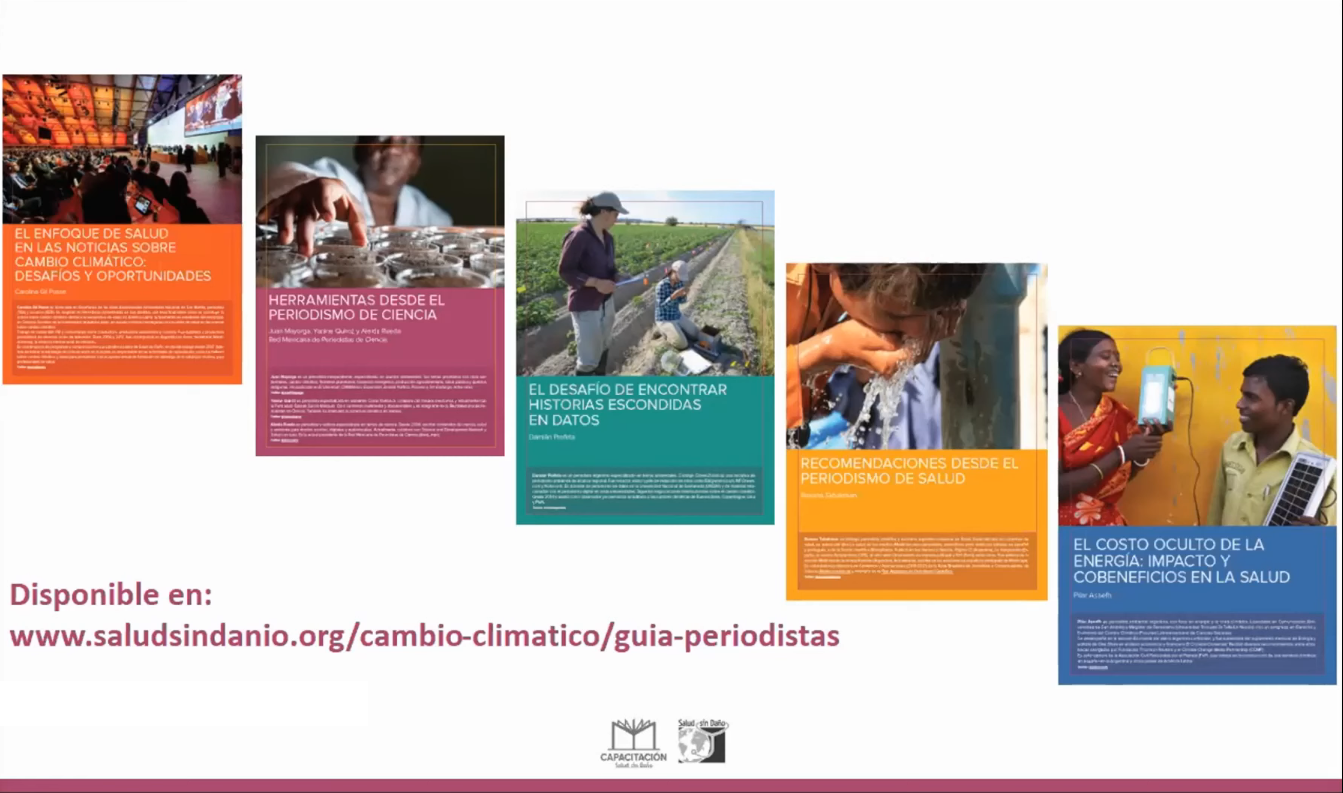 One of the goals of the guide is to encourage journalists to incorporate a health perspective from the very beginning when pitching stories on climate change. To this end, it presents ideas, sources and useful tools for journalists in the region, divided into sections on health, data journalism, science journalism and coverage of the energy market.

The science section, for example, details where and how to find useful data for reporting and also how to use scientific research as primary sources of information, which is not always simple for journalists.

“For example, if we want to tell the story of how heat waves could be causing a reduction in the fertility of soils to produce food, I clarify that we require scientific evidence. We will most likely find it in these papers, in this scientific documentation, as long as we can recognize it from clinical observations,” explained science journalist Aleida Rueda, president of the Mexican Network of Science Journalists, during a webinar to present the guide.

In the chapter on scientific journalism, Rueda details how to find accessible, current and comparable data among the countries of the region and also highlights the need to, whenever possible, offer positive perspectives to readers. She also teaches how to apply scientific methods to journalistic work.

“We have to trace a route of investigation and for that we share [in the guide] that the first thing is to have a hypothesis that we can verify with journalistic investigation. (...) A central element of the hypothesis has to be the conflict, that is, what is the problem with this conflict that requires obtaining scientific information to explain the impacts of climate change on health,” Rueda said.

The guide also addresses the relationship between climate change and the current COVID-19 pandemic. According to the authors, the pandemic is related to sustainability coverage in several ways, which reinforces the need to communicate it properly.

“[The pandemic] made it clear that you cannot look at the two crises, health and environmental, as if they were not connected because human and planetary health are one,” Argentine journalist Roxana Tabakman, who wrote the section on health, told LJR. “In my chapter, for example, I grouped proposals for those who have been covering climate change and perhaps have not yet stopped on its link with health, and for those who cover health and have not yet addressed climate change as a public health problem.”

“The environmental debate gained space in the media because the pandemic is seen as part of the negative interactions of human beings with nature and it could be seen that this bad relationship can have very serious impacts on ecosystems, human health and the economy of the world,” Profeta said. “Likewise, the guide provides direct access to other valuable sources to incorporate accurate and concrete data on climate change and aspects related to health to strengthen journalistic stories.”

Seven journalists from Latin America collaborated on the guide, which is available in Spanish for free download here.