“We will not duck, we will not hide, we will hold the line,” said Filipino-American journalist Maria Ressa in a documentary over the last four years of Rodrigo Duterte as president of the Philippines, and about to release in the United States.

“We felt this is the line of our constitutional rights, we felt power coming at us... and if you step off the line you can’t reclaim that ground back. Since then it has been our battle cry,” explained Ressa, the first keynote speaker of the 21st International Symposium on Online Journalism (ISOJ) organized by the Knight Center that is taking place virtually for the first time this year. Her panel “Technology’s impact on democracy” was chaired by Reg Chua, global managing editor for Reuters, on the morning of July 20. 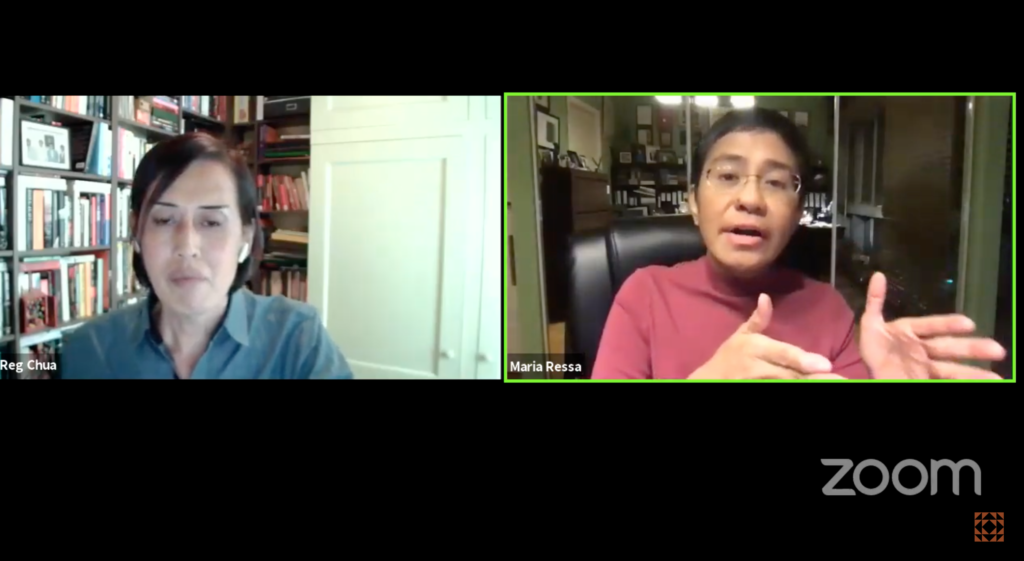 The fight for Ressa has not been easy. As the founder, executive editor and CEO of Rappler – one of the leading online news organizations in the Philippines – she has become one of the most popular targets of the attacks from president Duterte and his followers. In the last year she has had eight arrest warrants, had been arrested twice in a five-week period, and is facing at least six other investigations related to her journalistic work.

The most serious case happened on June 15 when Ressa and former Rappler colleague Reynaldo Santos Jr. were convicted of “cyber-libel” – before the law was even enacted – and she could face six years in jail. Although they both posted bail, they could be imprisoned if the case is not overturned on appeal.

According to Ressa, the attacks against her and other journalists in the Philippines has come to its current state by a process were social media has been used as a weapon. The weaponization of social media begins with death threats and hate messages, Ressa explained, but it can later evolve into complex disinformation networks that actually can influence real people’s behavior.

Ressa said that there are three key things that have affected the Rappler team. First is the government increase of fear mongering and death threats toward journalists and citizens during the pandemic, giving an example that a citizen was murdered by armed forces for not wearing a face mask. Second is the government's shutdown of the nations largest news organization ABS-CBN because the government did not like what they were reporting; and finally the anti-terror law that will have major ramifications on press freedom.

"This now means a small group of cabinet secretaries can designated someone, a critic, a journalist, can designated me a terrorist. And because of that we can be arrested without a warrant and held for up to 24 days,” Ressa said about the anti-terror law.

The role American social media companies should not be ignored, Ressa said, as this is where the inciting of hate and the creation of networks of disinformation began.

In 2016, when president Duterte took office, one of the first things that started circulating online was the idea that journalism was equated to criminality, by using social media campaigns with messages like “Maria Ressa is not a journalist, she is a criminal.” Although at first it was laughable, she said, she soon saw that people were not turning to her 35-year professional life to dispute the false accusations made online. When a lie is repeated so many times, people begin to doubt the truth, she said.

The process evolved the following years. The president and other official began to repeating the lies. In 2018, there was a “weaponization of the law”  and 11 cases and an investigation were filed against Rappler. In 2019, Ressa had eight arrest warrants, and was arrested two times. In 2020 Ressa was convicted. This government actions against her and Rappler made clear that journalist would equal criminal, she explained.

“This is how you create alternative realities, this is how you make a lie look like fact, this is democracy is dead by a thousand cuts,” she said. “We now live several years of this, it is first-hand experience for us. But as early as 2017, I started to say, 'you have to look at the Philippines because our dystopian present is where you are headed.' This is coming soon to a democracy near you if it hasn’t got there yet,” she stressed.

Ressa showed data regarding how journalists and news organizations came under attack in the Philippines. She said that covering the Duterte campaign was a difficult time for journalists, but the attacks against journalists became stronger even more so when the drug war began.

The attacks have also evolved from death threats and sexual harassment to complex disinformation networks with an active effort to dehumanize journalists via memes that use some personal issues against them. Ressa showed some examples of the hate messages she had received in which her eczema is used to attack her by calling her "scrotum face" and other in which she is turned into an animal.

“This is the movement towards dehumanization. We have seen things like this for example when the Nazi Germany was focusing on the Jews. This is now being the focus on journalists in the Philippines,” Ressa said. “Take a look a the dehumanization, because when you are dehumanized anyone can do anything to you, you are not a person.”

These attacks has two goals, Ressa said, to make journalists to doubt themselves and the work they do by attacking them at a personal level, and to eliminate what they say so that only one narrative can prevail.

And it is this point where democracy begins to fail. If citizens cannot have facts, cannot identify the truth, how are they going to make decisions to vote, she questioned. “If people have been manipulated, how can we actually have democracy?” she answered to Chua when asked about American elections, stating that what is happening in the Philippines could be the situation everywhere in the world.

It is this part where it becomes a personal fight for Ressa. “When it is a battle for facts, battles for the truth, journalists are activists,” she said explaining journalists have taken up sign a letter alongside politicians against the anti-terror law.

“It is a race against time. And it gets personal to me. I cannot back down because this is right,” she said. “We basically have a dictatorship masquerade as democracy […] and what are you going to do? Are you giving up or do you hold the line, and what is the cost of doing that?”

The 21st ISOJ takes place from July 20 to 24 virtually. To learn more about upcoming panels or to register, please go to our site www.isoj.org.