How defending democracy made Brazil's Folha de S. Paulo more profitable and influential despite scars left by support of dictatorship

The newspaper Folha de S.Paulo, one of the most influential in Brazil, entered a select and small group in the country and world. This month it celebrated 100 years in print, an especially rare achievement in the face of the revenue crisis that threatens the press as a whole.

It recognizes the last 40 years in particular, when the newspaper started to stand against the dictatorship it initially supported, and in favor of democratization and direct elections for president.

In the early 1980s, Brazil was experiencing a time of political change. With the dictatorship weakened, the opposition introduced an amendment to the authoritarian constitution that would allow direct elections for president in 1985. Folha embraced the Diretas-Já (Direct now) campaign and opened space for the main leaders of the movement. The proposal was defeated in the Congress still controlled by the dictatorial regime, but Folha's position paid off. 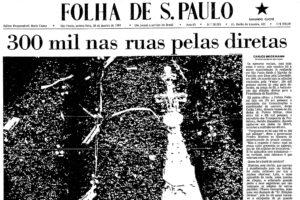 Historic cover of Folha de S.Paulo during the campaign for direct elections in Brazil. Credit: reproduction.

“The newspaper started selling more, which put it in the lead for off-the-shelf sales, [it sold] more subscriptions, started to earn more with advertising and started to have an importance that it never had before, either in the state of São Paulo, or in Brazil,” journalist Caio Túlio Costa told LatAm Journalism Review (LJR).

Costa was one of the journalists responsible for implementing the so-called Projeto Folha, as the newspaper's modernization process became known, and was also its first ombudsman. As of the mid-1970s, Folha had initiated an editorial reform that opened space for more plurality, including opponents of the regime. In the early 1980s, this process was deepened, with a set of rules and norms that instituted quality control measures previously unheard of in the Brazilian press.

“Strictly speaking, [Projeto Folha] was written by Otávio [Frias Filho, then-secretary of the editorial board and shortly afterwards the editor-in-chief] and we operated this… Projeto Folha was pluralistic, which listened to all sides, covered controversies, the debates, opening page 3 [opinion] to different spectrums of civil society, whether on the right or on the left,” Costa said.

The editorial turning point, and the positive result, both commercial and institutional, is even more significant when one recalls that a few years earlier the same newspaper had defended the overthrow of constitutional president João Goulart and the dictatorial military regime that was established in the country.

“Like all the mainstream press at the time, Folha supported the 1964 coup, at first, although, quickly, it distanced itself from it, to subsequently play a significant role in the Diretas-Já campaign in the 1980s. That earlier support was a mistake, already recognized by the newspaper a few times, the most recent in an editorial published on the front page last year,” Folha's editor-in-chief, Sérgio Dávila, told LJR.

Researcher André Bonsanto Dias studies the relationship between the Brazilian press and the military dictatorship. In his book “O Presente da Memória” (The Gift of Memory), he investigates the reconstruction of Folha's identity between supporting the coup and redemocratization. According to him, Folha's celebratory moments, as well as those of other newspapers, are opportunities to reinforce its identity, and Folha does this by associating itself with a known and positive historical fact, which was the campaign for direct elections.

“It is normal for Folha to look back on the last 40 years. Folha was several Folhas and what remains is Folha from the 1980s. That's how it wants to be remembered,” Dias told LJR. “Folha unified in the early 1960s [before, there were three Folhas: Morning, Afternoon and Night], but it was still a newspaper that was looking for an identity.” 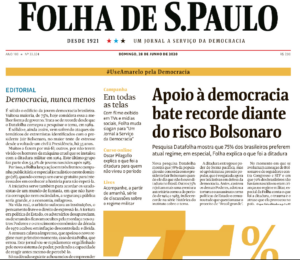 In 2020, Folha launched a campaign to defend democracy and reaffirmed in an editorial that it was wrong to support the 1964 coup in Brazil. Credit: reproduction

Upon completing 100 years, the newspaper already has its identity very well-defined. However, the challenges today are quite different from those of the 1980s. At the time, the decline of the dictatorship made the newspaper flourish. Today, the press crisis in the world and the specific one in Brazil – which makes Folha one of the preferred targets in the almost daily attacks on journalists – are a very present risk.

Perhaps that is why, last year, the newspaper launched a new campaign. Inspired by the Diretas-Já movement, which brought Folha to the national scene, the newspaper launched the campaign “Use amarelo pela democracia” (Wear yellow for democracy). The color yellow, associated with Brazilian nationalism, is a favorite of Bolsonaro's supporters, but it had also been the color of the movement that called for direct elections for president. The newspaper also changed its slogan from "a newspaper in the service of Brazil" to "a newspaper in the service of democracy."

However, the biggest threat comes from the news market and the difficulty in convincing the public to pay for news and to mobilize an audience that justifies the high prices charged for ads. Five years ago, at the celebration of Folha's 95th anniversary, then-editor-in-chief, Otávio Frias Filho, said that the economic equation of journalism has yet to be solved.

"We live in a paradox. Good journalism is an expensive activity. Although there is a very promising audience willing to pay for journalistic work in the form of a digital subscription, the advertising perspective in this field has proved to be more problematic," Frias said at the time. He died two years later, in 2018.

His successor, Dávila, bets that the newspaper will follow the example of other traditional publications in the world, which today depend more on readers, through subscriptions, than on the advertising market.

“The newspaper is on track to have its biggest source of revenue from digital subscriptions, as are The New York Times, the Financial Times and others. How long it takes us to get there is a crucial point. Looking at it today, we are well on our way,” Dávila said.

For Costa, part of the solution involves investing in technology to recover the leading role lost to social networks and other media.

"Shareholders need to put their hands in their pockets and invest in technology, invest in their own money, perhaps by going public," Costa said. You have to have enough resources to keep a newsroom standing, trained, independent, with concerns about plurality to keep the editorial project alive.”