Officers with the National Police raided the offices of Nicaraguan news outlet Confidencial around midnight on Dec. 13, taking computer equipment and documents with them, according to reports from the publication. 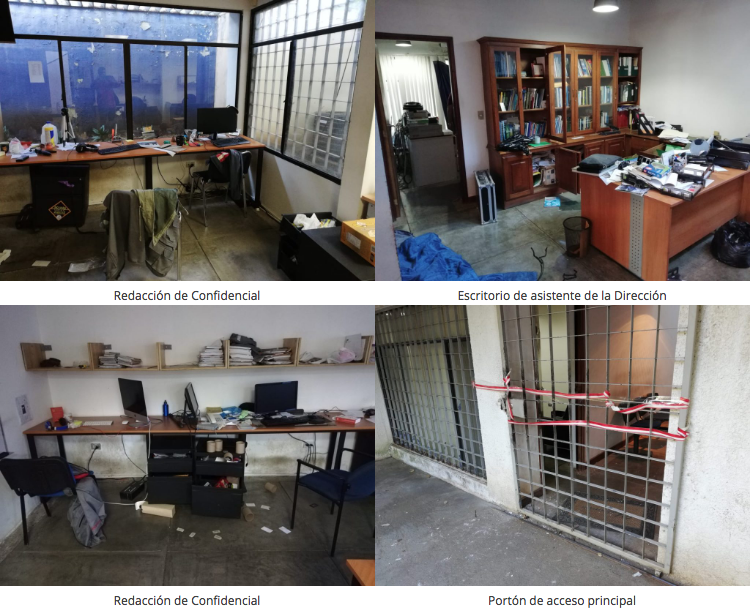 The offices of Confidencial were raided by the National Police on Dec. 13. (Screenshot from Confidencial)

The raided building houses the newsroom of the weekly magazine, the digital newspaper and television programs Esta Semana and Esta Noche.

“I denounce the dictator Daniel Ortega, supreme head of the national police, as responsible for the police assault against the offices of Confidencial, Esta Semana and Esta Noche,” he wrote via Twitter. “They raided our newsroom. A brutal attack against press freedom and freedom of enterprise.”

According to Confidencial, the raid --which it classifies as illegal-- happened in the context of the National Assembly blocking nine NGOs from operating in the country. Five of those organizations were blocked just on Dec. 13.

One included the Center for Communication Investigations (Cinco, for its acronym in Spanish), which was raided at the Confidencial address in 2008, according to the publication. The media companies behind Esta Semana, Esta Noche, Confidencial and Niú are not related to Cinco in any way, it added.

“At first they claimed they were investigating something related to an assault with the non-governmental organization Cinco. The security guards warned them that the NGO Cinco has another address in the Plaza España area and that in this building were the companies of Promedia and Invermedia, producers of the media that I mentioned under my direction,” Chamorro said in a video published on social media. “The police left and returned 30 minutes later, enraged, in two patrols, with dozens of policemen. They apprehended the security guards and then decided to search our offices. They threw open doors, forced locks and stormed our newsroom.”

The offices of the Nicaraguan Center for Human Rights were also raided on the night of Dec. 13, according to El País.

“I demand that the police return all the equipment and documents that they ransacked in the newsroom of Confidencial-Esta Semana,” he wrote in a separate Tweet. “They know that the NGO Cinco is at another address and has no relationship. It is a deliberate attack against the independent press. They will not shut us up!”

Chamorro said they will take the case to the Supreme Court.

“Once we have the documentation of the complete inventory (of the goods that were stolen), we are going to file a writ of amparo summoning the Supreme Court and the authorities to protect our rights, property rights, rights of press freedom and the rights of freedom of expression that have been crushed by a dictatorial act of Daniel Ortega,” Chamorro said in the video.

“The situation faced by journalists and executives of media like La Prensa, Confidencial, 100% Noticias, Radio Darío, Radio Mi Voz, Canal 12 and the journalistic team of Canal 10 of Nicaragua, among others, victims of constant harassment and threats, is serious,” said Lanza, Special Rapporteur for Freedom of Expression. The release from the IACHR specifically named the raid on the Confidencial offices.