The 2021 Ibero-American Colloquium on Digital Journalism ended with three important announcements: the launch of a digital journalism association in Brazil, an ebook on diversity and a podcast on the persecution from former Ecuadorian President Rafael Correa against newspaper El Universo while he was head of the country's government.

"In Brazil, there is an explosion of new media, as well as in Latin America, and these media are becoming more and more respected and more influential in the public debate," she said in the presentation.

Viana said that the association was born from a perception that these outlets make journalism different from traditional newsrooms, as it is more dynamic, innovative and diverse. And that the directors of these organizations have been holding meetings since August 2020 to build Ajor.

"The association's idea is to foster and strengthen this field, to strengthen diversity and independent journalism throughout Brazil. And also to spread this idea, to encourage other journalists to become entrepreneurs and to strengthen all the associates," she said, adding that Ajor also proposes to defend democracy in the country.

“This is a nine-month project, the baby is coming into the world. We are very pleased and honored for the Knight Center to have been involved in this project. As Natalia said, it is an example, which may perhaps inspire in other parts of Latin America and the world, the recognition that these journalistic startups are a new type of organization that should come together and associate, in the same way that traditional media are associates,” said Rosental Alves, director of the Knight Center.

Then, Mexican journalist and editor Mariana Alvarado talked about the launch of an ebook, as part of the First Latin American Conference on Diversity in Journalism, organized by the Knight Center, with the support of the Google News Initiative. The conference, which was held in March 2021, brought Latin American journalists to talk about gender, sexual orientation, racial and ethnic issues and disability.

“Today we want to share with you that we are preparing an ebook that we hope will be published soon,” she said, adding that the conference has more than 2,000 registrants.

“We really realized that we have to continue promoting diversity, inclusion and equity in our newsrooms, that is something that can no longer stop,” she said. 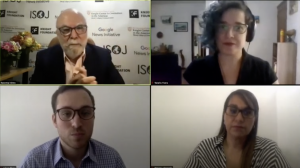 Alvarado said that, in addition to planning the second edition of the conference, the ebook will be inspirational material that will address the best practices on diversity in journalism, based on the experiences of the speakers at the event.

Finally, Ecuadorian César Pérez, a second-year student of journalism at the University of Texas at Austin, presented the podcast Crooked Power, due out in September. Pérez is co-director and co-presenter of the podcast, together with Anysa Hernandez, also from the university.

Pérez is also the son of the owner of newspaper El Universo, one of the most important newspapers in Ecuador, which is almost 100 years old. In Crooked Power, Pérez will tell the story of how his family became the target of former Ecuadorian President Rafael Correa. The podcast will talk about the government's anti-press narrative, freedom of speech and corruption.

“In 2011, then-president, Rafael Correa, sued my father for an opinion piece that someone else wrote in the newspaper. The lawsuit was for 80 million dollars and three years in jail,” Pérez said at the Colloquium.

“My great-great-grandfather founded El Universo, an Ecuadorian newspaper, a hundred years ago, but in 2011, my father fought to protect him from an intolerant regime,” Pérez said, in the podcast trailer.

The production, made jointly by El Universo and student podcast producer The Drag, will have an English and Spanish version.

Watch video from the 14th Ibero-American Colloquium on Digital Journalism in Spanish and Portuguese. The annual meeting, traditionally held after the close of the International Symposium on Online Journalism (ISOJ), is organized by the Knight Center for Journalism in the Americas, with support from Google News Initiative.