In deadliest region for journalists due to COVID-19, Latin American press associations ask governments for vaccines

In other latitudes, countries such as Zimbabwe and Indonesia included journalists among the priority groups to receive the COVID-19 vaccine. Which countries in Latin America recognize journalists as essential workers and include them in vaccination plans as at-risk groups? Just El Salvador, so far.

"We will vaccinate all journalists starting this Tuesday [April 20]," said Salvadoran President Nayib Bukele via Twitter. The leader said in a later tweet that he includes journalists as second-line workers, for covering hospitals, vaccination centers, etc. 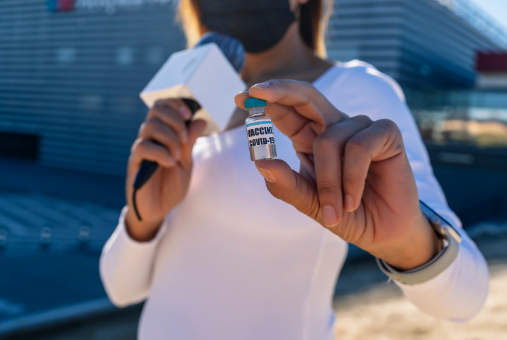 A Salvadoran parliamentarian stressed that journalists “inconvenient" to the government will also receive the vaccine.

Journalistic associations in Brazil, Peru, the Dominican Republic, Argentina, Chile, Venezuela, Bolivia, Honduras, Paraguay, among other countries in the region, have been asking their governments to recognize journalism as a necessary profession for information during the pandemic, and the danger media workers face every day when taking to the streets to report on COVID-19.

Latin America is the most deadly region for journalists in terms of deaths caused by COVID-19. The Press Emblem Campaign (PEC) reported 1,060 journalists globally died from the virus between March 1, 2020 to April 10, 2021. More than half (611) were from Latin America.

Further, PEC pointed out that the countries with the highest deaths are from Latin America: Brazil (172), Peru (138) and Mexico (93).

Although few, there are some initiatives from national authorities in the region to promote or implement the inclusion of press workers in priority vaccination groups.

In Brazil, “The State of Rio de Janeiro has already lost several communication professionals in this period, and many others who were contagious managed to survive after a long battle with the disease,” said Mário Sousa, president of the Union of Journalists of the State of Rio de Janeiro, according to the National Federation of Journalists (Fenaj, for its acronym in Portuguese) of Brazil.

Senator Nelsinho Trad suggested in a session to the president of the Federal Senate to include press professionals from Mato Grosso do Sul in the priority group for vaccination against COVID-19, Campo Grande News published.

Likewise, the Secretary of Health of that Brazilian state, Geraldo Resende, announced that the State will soon issue a resolution to include journalists among those to be immunized.

In the Dominican Republic, Minister of Health Daniel Rivera, promised ,at the request of the journalistic unions, that journalists, especially the most vulnerable, will be included in the vaccination groups of the new batch of shots that arrive in the country, as published by Dominican site Acento. The president of the Dominican College of Journalists (CDP), Mercedes Castillos, thanked the minister for his receptivity on behalf of her colleagues, the media outlet said.

The National Association of Journalists of Peru (ANP), which counts more than 11,000 journalists among its ranks, addressed a letter to Minister of Health Óscar Ugarte to insist with its request to vaccinate journalists, photojournalists, cameramen and other media workers.

"The situation, Mr. Minister, is catastrophic in the sector, especially in regions, where the average number of deaths this April is two journalists killed per day by COVID-19," the statement said.

The Chilean College of Journalists also sent a letter to the head of the Ministry of Health asking for journalists to be vaccinated. "The population has the right to be informed and journalists have the right to work under adequate health standards," the letter said, as published by the site Antofagasta TV.

The Argentine Federation of Press Workers (Fatpren) also asked the government to give priority in vaccinating essential worker groups such as journalists, "who carry out their tasks on the street or in person."

Argentine legislator Ingrid Jetter asked through a draft resolution to include journalists among the priority population to be vaccinated, according to the site Parlamentario.

"Media are a key factor in making the population aware of the severity and risks of the pandemic, as well as in promoting the adoption of behaviors to combat it," the congresswoman said.

On its social networks, the Union of Journalists of Paraguay (SPP) asked authorities to guarantee the distribution of supplies, medications and vaccines to mitigate the country's health crisis. “Social mourning strongly affects press workers. This week (April 18) closes with the death of at least three colleagues” due to the coronavirus, the organization reported on its Facebook account.

Bolivian journalists' associations once again demanded from the government that journalists be vaccinated against COVID-19. In addition, they asked media executives to adhere to their request. "Do not let us die to prove that our work is taken into account because freedom of expression and information is one of the main bastions of democracy," they said in a February 12 statement, according to the Bolivian website Opinion.

Likewise, the National College of Journalists of Venezuela (CNP), agreed to demand that the country's health authorities allow Venezuelan journalists, "above any political consideration," to be vaccinated through the Covax program of the Pan American Health Organization, according to Runrun.es. The CNP represents more than 25,000 affiliated journalists throughout Venezuela.

"The nature of our work, essentially social, demands from us journalists many times mobility and personal contact, so it is imperative that we fight for the biosecurity of our colleagues," the statement said.

In Honduras, at least 11 journalists have died during the pandemic, according to the Association of Honduran Journalists (CPH), as reported by Proceso Digital. CPH President Osman Reyes Pavón said they consider "fair that there is a process of inclusion [of journalists] in vaccination so that colleagues can carry out their information work with greater security," according to the site.

The CPH announced that it will ask the Ministry of Health to include journalists in vaccination plans for risk groups, Proceso Digital reported.

In the Caribbean, the Prime Minister of Jamaica included all media professionals in the island's vaccination groups since mid-April, Loop Jamaica reported.

"From the onset of the pandemic, journalists have overwhelmingly proved the essential role they play in informing their citizens and fighting against disinformation over the Covid-19,” said Anthony Bellanger, general secretary of the International Federation of Journalists (IFJ). “Journalists are essential workers that should be treated as such within national COVID-19 vaccination campaigns worldwide.”