This conference took place on Sept. 9 and 10 and was organized by the Knight Center for Journalism in the Americas, with the support of Google News Initiative. A recording of the event is available on the Center's YouTube channel.

For the panelists, diversity can be promoted by both traditional and independent media, as long as it is done rigorously. "Journalism goes after the truth and showing the truth is also showing difference. The world is full of different people, fortunately, and our job is to show that diversity," Muller said.

Below is a summary of the projects presented by each of the speakers.

Pilar Cuartas is the gender and diversity coordinator at El Espectador. This Colombian news oultet has been exploring and giving space to issues of sexual diversity and feminism for several years, but it was only a few months ago that this section was officially created

The core team of the gender and diversity section is made up of three people, but more than 11 women work on the Igualadas project (focused on women's rights) and more than six journalists collaborate on La Disidencia (focused on sexual diversity and the LGBT+ community).

"These have become autonomous and participatory spaces of El Espectador," Cuartas said during her participation in the panel. However, the team-building process has not been easy.

"For me it has been difficult to find LGBT+ journalists who want to focus on writing about sexual diversity issues. Despite the fact that personal experience becomes a vital fundamental input when practicing this type of journalism," Cuartas said.

Both Las Igualadas and La Disidencia make use of multimedia language to connect with their audiences. Cuartas, who has previous experience in long-form reporting, believes that "investigative journalism must lower its arrogance in the face of new formats and understand that language is important today.  It is useless to have a elaborate investigation if at the moment of presenting it, it is in a dense, heavy language, which is journalism made only for journalists and not for the audience that needs it."

According to Aza, this program seeks to empower the work of women leaders in the region and strengthen a network of mutual support.

"The METIS program has been running for four years. There have been four editions of six months of mentoring each. This includes support for 39 women founders and more than 1,700 hours of mentoring," Aza said. "More than just providing technical knowledge, there is accompaniment so the founders do not feel alone," she added.

According to Aza, this type of project is important to improve representation and break with inequality because women "were never taught to talk about money."

David Adrián García, director of Altavoz LGBT+, presented his initiative that started as a newsletter in 2021 and today is a news outlet.

The journalists of Altavoz LGBT+ are based in Chihuahua, in northern Mexico. "The north of the country is characterized by a lot of machismo. It is the second place with the most hate crimes against trans women in the country. So we saw the need to talk about these issues," García said.

Not only do they focus on stories in northern Mexico, but they also focus on telling stories outside of the big cities to break away from the centralization that characterizes the country.

Altavoz LGBT+ is part of the Latam Coalition, an initiative of Factual/Distintas Latitudes, which according to its website, seeks to foster the growth of media founded by young journalists, as well as to add value to content and audiences. Their most recent collective project was Journalists from five Latin American countries team up to investigate food self-sufficiency,an investigation told from the experiences of women and people from LGBT+ populations. 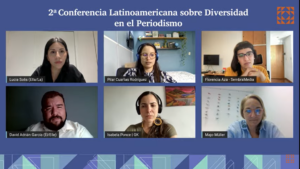 GK is an Ecuadorian media founded in 2011 and is currently among the 10 most read news outlets in the country. Its editorial director, Isabela Ponce, explained that their newsroom seeks to generate investigative reporting with a gender perspective that can have an impact.

"We are committed to having the rigor of investigative journalism on gender issues to talk more about structural problems, without forgetting these are not isolated cases," Ponce said.

GK describes itself as a news outlet with a focus on gender and human rights that writes for unconvinced audiences. "By unconvinced we mean people who do not understand much about the subject, but we still try to reach out them," Ponce said.

Ponce also spoke of the importance of publication as reparation and of writing those stories that have an impact on victims and survivors.  He gave as an example the reports: A military fort, flanked by indiscipline and an accusation of sexual violence; and The terror routine.

For Ponce, "the key is to maintain journalistic rigor when dealing with these issues that can be as serious or more serious than others".

Más Miradas is a Fopea project, with the support of Google News Initiative, which seeks to provide opportunities to young people who want to become journalists in low-income neighborhoods in Argentina.

At the same time, the project seeks to enrich the media with other points of view. "Mass media do not reflect the truth of working class neighborhoods. They show a reality that has to do with marginality and that only represents a small percentage of those who live in these neighborhoods," Majo Muller, promoter of Más Miradas, said.

This initiative stems from Fopea's research entitled "News deserts," which seeks to show the areas in Argentina where professional journalism is very weak.

Upon seeing the enormous amount of existing information deserts, and noticing that other media do not represent this reality, outstanding professionals in the journalistic field decided to train more than 20 children from poor neighborhoods in Argentina for three months.

"The voices of the most vulnerable are silenced and others speak on their behalf and carry on stigmas, stereotypes and denigrating myths," Muller said.

This panel ended with some final reflections from all attendees on the search for resources when doing research. All agreed that funding should be part of planning before creating a news outlet.

"The first thing to do is to train journalists," Pilar Cuartas said. "We have a gigantic lack of training.  In the School of Communication they never once talked to me about diversity, nor in my career did I ever find an editor who talked to me about doing journalism from a human rights, diversity and gender perspective. Change must start from within newsrooms."