The new, impactful and fragile journalism in Northeastern Brazil

The northeast region of Brazil is the second most populous in the country, has the third highest GDP and the lowest GDP per capita in the country. Journalism in the region suffers doubly from a lack of resources and reduced national visibility. Despite the economic limitations, independent journalistic initiatives are multiplying in the nine states of the Northeast and are capable of having an impact even with restricted resources.

According to the most recent edition of the News Atlas, 62.4% of the northeastern municipalities are still news deserts -- the second highest percentage in Brazil. Cities where there is not even one newspaper are considered news deserts. To make matters worse, in 2021 the crisis took off the streets three traditional newspapers with daily circulation in the region: Jornal do Commercio, Diário do Nordeste, in Fortaleza (CE), and O Estado do Maranhão.

"Financial sustainability is a major barrier to the development of independent journalism in Brazil as a whole and in the Northeast in particular, since many of the funding opportunities are concentrated in the wealthier Southeast region," journalist Mariama Correia, creator of the Cajueira newsletter and researcher for the News Atlas in the Northeast, told the LatAm Journalism Review (LJR). "The decentralization of these resources and training opportunities is important so that communicators and journalists in the region can develop new ways of financing their projects."

In light of this, local digital initiatives gain even more importance although they survive with enormous sacrifices from their teams. In this article, LJR reports on five cases of novel news outlets that have emerged in recent years and produce high-level journalism, although they deal daily with the challenge of financial survival.

Saiba Mais (Read more): An oasis in a news desert

For four years, the Saiba Mais Agency has covered the daily life of Rio Grande do Norte and its capital, Natal. Eighty-two percent of the state's  municipalities are classified as news deserts, according to the most recent edition of the News Atlas. With a monthly budget of a meager BRL 17,500 (USD $3,500) coming mainly from reader donations, the news outlet has six journalists, of whom only one is full-time.

The founder of Saiba Mais is experienced journalist Rafael Duarte, originally from Brasília and with more than 20 years of experience in newspapers in the state of Pernambuco. He created the agency for two reasons: the lack of a professional perspective in a restricted market and the concentration of ownership of the state's traditional news outlets, he told LJR. 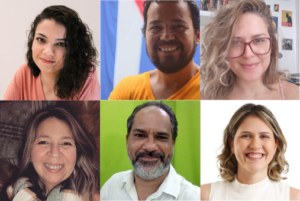 The Saiba Mais team: Independent journalism as an alternative to politically-owned media outlets in Rio Grande do Norte. (Credit: Courtesy)

"When I arrived [from Brasília], I was startled: all the radio and television channels, for example, were allotted by the politicians holding public office. [Rio Grande do Norte’s] main newspaper, Tribuna do Norte, and the [State’s] TV Globo affiliate belong to the Alves family [of former minister and congressman Henrique Eduardo Alves]; the TV Record affiliate belongs to José Agripino Maia [former governor and former senator], and so on," Duarte said.

Saiba Mais is inspired by the successful Pública Investigative Journalism Agency, although Duarte admits that he is unable to do the same type of in-depth journalism due to lack of resources. Even so, it is capable of producing scoops with repercussions, such as the news that the mayor of Natal readjusted his own salary to become the second highest paid mayor among the capitals of Brazil.

"We spent about two weeks just giving the story [about the readjustment]. No one else [from the press] talked about it, everyone kept quiet. It is this kind of coverage that makes us really proud, because our colleagues from other media outlets congratulate us, say they didn't do it because they couldn't," Duarte said. "My great inspiration is Pública, but we have no budget, no fixed financing. We need a lot of audience to generate revenue. So we do the hard news. I think the city needs this, right?”

Retruco: in competition with Folha and TV Globo

Four years ago, seven journalism students from Pernambuco proposed a story for Agência Pública and could not believe it when they won BRL 7,000 (USD 1,200) to produce a video story on a difficult subject: police violence. The story reconstructed two cases in which military police officers shot protesters in protests in the Northeast.

"[We founded Retruco] with a common desire: to communicate in an effective, accessible, modern, and independent, but of course, from a Northeastern perspective! We wanted to go beyond traditional journalism and decentralize communication, which is very much centered in the Southeast of the country," Juliana Aguiar, one of the founders of Retruco, told LJR. "[Being selected in public contests] gave us the certainty that we were going in the right direction."

In 2021, Retruco was a finalist in the multimedia category of the prestigious Vladimir Herzog Prize for Journalism and Human Rights with the project Dependencies, about the network of economic, political, and religious interests surrounding the provision of shelters and hospitalizations for drug addicts in therapeutic communities and rehabilitation clinics in the Northeast. 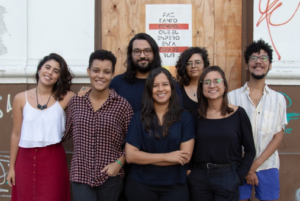 Part of the Retruco team: Success in journalism open contests and receiving awards does not guarantee financial sustainability. (Credit: Courtesy)

"We competed alongside work from Fantástico and Folha de S.Paulo," Aguiar said. The special story was funded by a grant from the Gabo Foundation worth BRL 14,000 (USD $2,745.00).

Despite the recognition of its journalistic quality, Retruco still has no fixed source of income. For this reason, none of the ten team members is fully dedicated to the agency.

"Our project is not yet sustainable and this is our main difficulty at the moment. What keeps us going are the reporting grants approved through public funding. Those funds help us contribute to the production/logistics costs, pay our collaborators, and do more robust reporting," Aguiar said.

When the Tatu Agency went live for the first time on April 25, 2017, the three founders, all still journalism students, knew that it was the first data journalism initiative created in the state of Alagoas. What they didn't know was that it was also the first in the entire Northeast of Brazil.

"Our intention was to obtain, analyze and produce stories with data focusing on Alagoas, exploring local characters, experts and sources. What motivated us was mainly the potential of Data Journalism and seeing that it was an unexplored area in Alagoas. We were also bothered by the shallow dissemination of data, especially public data, since the local media generally gave the information passed on by press office," Graziela França, founder and director of content at Tatu, told LJR.

Five years later, Tatu has a team of eight people: five journalists, one graphic designer and two interns. The agency also enjoys a rare national recognition for news outlets from the Northeast, achieved through national and international awards, and funding rounds. Today 100 percent of the revenue come from partnerships with private companies, public institutions and NGOs, producing everything from fact-checking projects, production of data stories and even special reports. 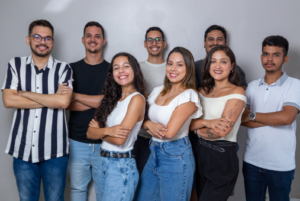 Agência Tatu: The first data journalism initiative in Northeastern Brazil wants to expand coverage from Alagoas to the other states in the region. (Photo credit: Orlando Costa)

"Our own production, available for free on our website, does not bring us any profit directly, but works as an impact mechanism by offering quality content to society. Besides being fundamental to creating a great way to showcase our projects and all our skills as a media startup," França said.

Among the main reports is "The Bitter Cane," which shows the high rate of work accidents and aftereffects suffered by sugar cane workers, an important segment of the economy of Alagoas. The COVID Monitor used to publish daily updated information about the disease in the state -- it was discontinued in March as the pandemic cooled down.

"Financial sustainability is one of the main points, but we also found it difficult to meet all the demands of management, production, and expansion, since we are three journalist-partners and had to develop skills in entrepreneurship, programming, design, etc," França said. "Currently, we are in an acceleration process that deals precisely with the expansion of Tatu to other states in the Northeast. We are working on several ideas to reach more people in Alagoas and other states in the region, which will have more specialized and in-depth data coverage." 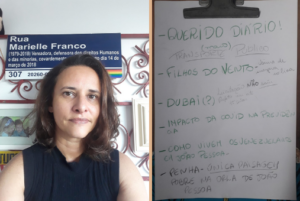 Tatyana Valéria, from Paraíba Feminina: Notes on stories that are yet to be written while the site hibernates for lack of resources. (Credit: Courtesy)

LJR spoke with Tatyana Valério, founder and sole journalist of Paraíba Feminina, on the day she published the last feature story in the three-year existence of the Paraíba-based feminist journalism site. Due to a lack of money to maintain the project, Valério has decided to stop operations. Although she admits she would resume the work if she can get new funding options.

Valério launched Paraíba Feminina in 2019 to give visibility to feminist issues in the state. At that time, President Jair Bolsonaro had just taken office with a discourse of opposition to the feminist agenda. After two years without pay, she ran the site as best she could with her own resources until she got two advertising deals that paid BRL 3,700 (USD $722) per month. The deals expired in April and were not renewed.

"There's a board here in front of me with a lot of stories for me to write, but I need to spend time doing the [work] that's going to pay my bills, so I'm leaving my ideas here on stand-by," said Valério, who works as press secretary at the Legislative Assembly of Paraíba.

In three years, Valério is proud of the results of the feature stories she published. In one of them, she denounced cases of sexual violence against teenagers by a local celebrity. In another, she showed situations of abuse and harassment against female workers at a company. In another, she managed to get the ex-wife of a detainee to receive police protection after threats from her ex-husband. As a result, she has collected several threats, two of which she considers "more serious."

“My mother asks me if these threats are worth suffering. I don't know. Maybe I can't live off of this, which was my dream, but I'm doing something. I'm leaving some legacy for when my kids are adults, will they remember? They will say, 'my mother did this, my mother did that, my mother helped people,'" Valério said. “I was scared at the time I received the threats. I was really scared. 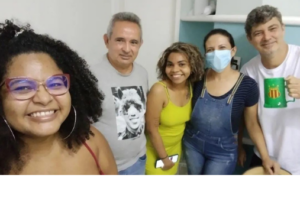 Tambor Agency: There is pride for existing in an adverse environment. (Credit: Courtesy)

São Luís, capital of the state of Maranhão, is the city with the largest number of registered news outlets in the Northeast: 127, according to the News Atlas. The Tambor Agency, created in 2018, is one of these initiatives. Created from the Vias de Fato newspaper, a monthly print publication that circulated from 2009 to 2018, Tambor describes itself as a news outlet for "community communication that is free, alternative, and popular."

Like many news outlets in this list, Tambor's "biggest challenge is financial. It is to exist, maintaining an editorial project committed to the principles for which we were created: the defense of human rights, of the labor class, of environmental preservation," journalist Rejane Galeno, who chairs the Maranhão Society for Alternative Media and Popular Education Mutuca, responsible for Tambor's operation, told LJR.

There are five people on the team: three journalists and two communication students. Besides the feature stories for the site, Tambor also produces a daily live newscast on YouTube and a podcast.

"We have already received awards in the human rights area, and our work has been recognized by different categories and organizations. But the greatest pride is to exist in such an adverse environment. And to exist guaranteeing the total and absolute freedom of expression of our interviewees," Galeno said.