'Journalism should be a tool for social transformation': 5 questions for Mexican journalist Laura Castellanos

On July 21, Mexican journalist Laura Castellanos was announced as one of the 2022 recipients of the Maria Moors Cabot Prize, awarded by the Columbia University School of Journalism in New York City to recognize journalists and media outlets for “for career excellence and coverage of the Western Hemisphere that furthers inter-American understanding.”

Created in 1938, the Cabot is the oldest international journalism prize in the world, and has distinguished Castellanos as “one of Mexico's leading independent reporters, producing consistently excellent work that demonstrates her commitment to the truth and her talent for in-depth reporting,” according to the official announcement. “The Maria Moors Cabot Jury honors Laura Castellanos as an example of a courageous reporter who continues to do her extraordinary job in the face of adversity and violence.” 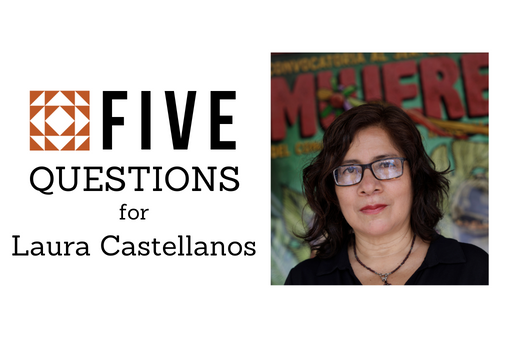 The distinction is a milestone in the 30-year career of Castellanos, a feminist journalist committed to investigating structural violence in Mexico. Her works broaden the view of this phenomenon beyond narratives about drug trafficking. They also implicate the state and private agents in the perpetuation of violations and injustices against the most vulnerable populations in the country. Among her investigations published in books are "México Armado [armed Mexico] 1943-1981" (2007) and "Crónica de un país embozado [chronicles of a muffled country] 1994-2018" (2018).

She is also the author of "La marcha del terremoto feminista: historia ilustrada del patriarcado en México [the feminist earthquake march: an illustrated history of patriarchy in Mexico]" (2022) and is one of the collaborators of the collection "Mexicanas en pie de lucha [Mexican women in struggle]" (2022), two works that deal with women's struggles for dignity and rights in the country. "it is vital that Latin American journalism become aware of its responsibility to cover, with a feminist perspective, the crisis that is tearing the region apart in terms of our civilization and the globe, and the protests that confront it," she said in an interview with LatAm Journalism Review (LJR) as part of the "5 questions" series.

Castellanos is also one of the co-founders of the journalism collective Reporteras en Guardia, which formed in 2018 and created the online memorial Matar a Nadie ("Kill Nobody") to honor the memory of journalists murdered or disappeared in Mexico since 2000. In her assessment, "President Andrés Manuel López Obrador has acted with indolence in the face of the increase in murders of colleagues" – so far in 2022, there were 13 journalists murdered in the country.

Read below the full interview with Castellanos, who also offers advice to independent journalists in the region: “Collective embraces are the best way to navigate the storm.”

LJR: Why, 30 years ago, did you choose to dedicate yourself to journalism? And why do you continue to choose journalism, even in a context of extreme violence against the profession in Mexico?

Laura Castellanos (LC): I chose journalism because I found it a formidable challenge to learn to listen, investigate and tell stories. I studied Social Communication at a public university in Mexico, the Universidad Autónoma Metropolitana - Xochimilco campus (UACM-X), which is known for its critical thinking. During my studies, I learned a thesis that marked me: journalism must be a tool for social transformation. In 30 years of independent work, I have witnessed the evolution of structural violence in the country and the importance of critical journalism that guarantees the right to information and freedom of expression. The country accumulates a historical burden of impunity and corruption. Today, it is experiencing an alarming humanitarian crisis caused by the militarized security strategy implemented 15 years ago, which has led to a spiral of more than 100,000 cases of disappearances and 250,000 violent deaths. Mexico is my home, my country pains me. I continue to do journalism because this is how I join the stream of critically thinking journalists who seek to inform and provide ways of understanding to society on how we arrived at this humanitarian crisis, so as not to continue deepening it.

LC: I have openly declared myself a feminist journalist because I do not believe in objective journalism. I believe, as I once heard journalist Rosa Rojas say, in subjective but ethical journalism. And subjectively I choose to gather the voices of vulnerable populations (women, children, youth, indigenous peoples, migrants, people of a wide range of sexual diversity and gender identity). This does not mean that I am going to turn them into martyrs or exclude them from the patriarchal order. I am simply going to capture historically silenced voices. Having a feminist perspective has clarified for me how the mechanisms of patriarchal violence work and has nurtured my gaze in the processes of research and analysis.

LJR: In this sense, what do you consider to be the role of journalism in the struggle for gender justice in Latin America?

LC: it is vital that Latin American journalism become aware of its responsibility to cover, with a feminist perspective, the crisis that is tearing the region apart in terms of our civilization and the globe, and the protests that confront it. This has been in clear evidence in Mexico, given that the increase in macho violence during the pandemic (unemployment, family violence, murders, femicides, disappearances, judicial impunity) has triggered an unprecedented insurrectional movement of young women who have protested in public spaces against the omissions of the State apparatus and the sensationalist journalistic coverage. The national media exposed brutal images of victims of femicides and personal governmental information of survivors of sexual violence. On one occasion, angry women demonstrators burned a vehicle belonging to a national newspaper. Protests in public spaces and social media over such coverage has led to greater awareness in the media. Some created editorial boards with a feminist perspective and have been recording the deepening gender injustices in a more empathetic and humane way. There is still a long way to go, but great progress has been made. This is the direction in which the media and Latin American journalism should be moving, if we want to contribute to a society in which vulnerable populations live free from violence.

LJR: You are a co-founder of the collective Reporteras en Guardia [women reporters on guard] and you started the project Matar a Nadie [kill no one] in 2018, just before Andrés Manuel López Obrador was sworn in as president of Mexico. What is your assessment of the situation of journalists in the country these past four years?

LC: Mexico is today the most dangerous country in the world to work as a journalist, according to Reporters without Borders. The greatest risk is for those who work in the different states in Mexico and especially in small towns plagued by organized violence. President Andrés Manuel López Obrador has acted with indolence in the face of the increase in murders of colleagues. In the first semester of 2022, 12 cases have been registered, including those of 3 women [on August 5, the number of journalists murdered in the country in 2022 had already reached 13]. He has stigmatized the critical and independent press, which has created a hostile climate against those who are not his unconditional supporters and their risks have increased. Unfortunately, this polarizing attitude is being copied by other rulers within the country and in Latin America, as is the case of Nayib Bukele in El Salvador.

LJR: The precariousness of the profession is a trend in the region, with extreme working conditions, long hours, and low salaries. As an independent journalist, what advice would you give other journalists to be successful in their work and be able to support themselves financially?

LC: We are living in a very acute moment of precariousness, especially for those of us who are independent journalists. The pandemic aggravated the crisis that the media were already experiencing, and I am afraid that we have yet to witness its final toll. In a convulsed world, interesting topics to cover abound, but the challenge is to learn to define powerful journalistic angles. However, we have to do some good reporting before proposing stories, in order to have a clear coverage strategy and a well-drawn budget. Companies should cover travel expenses, but when this is not possible, an alternative may be to carry out coverage collectively, in order to maximize time and minimize expenses. The dynamics of virtual communication due to the pandemic has also made it possible for us to do some of the work remotely, when we cannot do it in person. Realistically, we must also be open to come and go from the profession when we must seek alternatives or combine journalism with other forms of income. And it is essential to create solidarity networks among colleagues, to share tips for possible collaborations, to have security protocols in place to monitor and protect each other, to be there for each other, to listen to each other. Collective hugs are the best way to navigate the storm.