Journalists and academics debated the importance of researching the findings of fact-checking to discover what strategies and interests false information serves during the panel “Disinformation and Misinformation. What can be done beyond traditional fact checking?” July 21 at the  International Online Journalism Symposium (ISOJ).

Panel moderator Talia Stroud, director of the Center for Media Engagement of the University of Texas at Austin, said that the tricky part of the traditional fact-checking model is the speed in which fake news can reach hundreds of thousands of people. 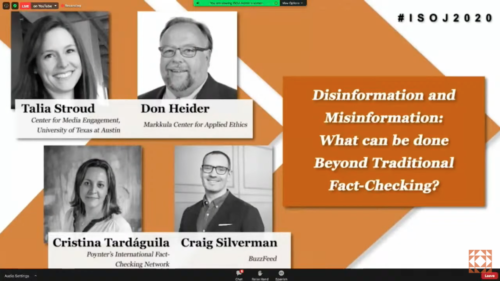 ISOJ 2020 panel: Disinformation and Misinformation. What can be done beyond traditional fact checking?”

“Falsehood is diffused faster than the truth. And I think this is a critical challenge when we think about how we should move beyond traditional fact checking,” Stroud said.

In that sense, she said, organizations should determine their target audience, learn how to get their audience attention in a format that the audience might find attractive, such as graphics, podcasts, etc., think about the divides out there, and lastly, to think more about experimenting and iterating.

Craig Silverman, media editor of BuzzFeed, said there is a necessity to investigate the actors of misinformation, and the platform and the ecosystem that actually enables it.

“We are in the midst of a boom” of fact-checking organizations, said Silverman, citing the growth based on Duke Reporters’Lab’s findings. When tackling misinformation and disinformation, it is important to pay attention when a single funder is dominating the scene, highlighted Silverman.

He used Facebook, that has partners all over the world and has partnered with Agence France Presse, as an example. The platform asks their partners to check specific facts, specific claims, rumors, viral content, but not politicians. “We have to make sure that traditional fact-checking is not necessarily being co-opted to serve one party. Who are the actors? What are the systems, the technologies and the other players that are enabling this entire ecosystem to exist?”, asked Silverman.

It is no longer enough to check if a claim is true, Silverman said, but it is also necessary to  report the truth about the lie. Silverman said journalists must expose the bad actors, the entities behind false, misleading and inauthentic content and behavior, to reveal the systems and tactics.

Silverman used the cases of Roger Stone, a Donald Trump adviser, who recently had his sentence commuted. Facebook announced it has removed a range of accounts and pages linked to Stone that were fake. Twitter did remove accounts for the same reason. These accounts and pages were promoting him and Trump, they had an agenda, they were inauthentic, polluting the information space without being necessarily false, said Silverman.

Something that can be done about misinformation and disinformation, said Don Heider, executive director of Markkula Center for Applied Ethics at Santa Clara University, is to provide a fact first and give context to the statement being made, instead of publishing the misleading statement and then giving the fact. Journalists need to stop relying on simplistic framings for covering complex issues, because often, misinformation uses these same familiar frames, he said.

“One of the things about giving our news primarily on online platforms is, I would say, an increased pressure to make stories, get stories up quickly and for them to be increasingly brief. So, brevity has become a very important principle. But the problem with that is that oftentimes it may cause us to be to oversimplify stories,” Heider said.

Heider said journalists need multiple literacies to recognize misinformation: social media literacy, that is more grounded in people’s emotions; science literacy when publishing a story about a scientific study; and brain literacy, related to our state of mind and our vulnerability to fraud and manipulation.

Cristina Tardáguila, a Brazilian journalist founder of Agência Lupa and associate director of the International Fact-Checking’s Network (IFCN), expressed some ideas of what can be done beyond fact-checking. She talked about the CoronaVirusFacts alliance she started at the beginning of 2020 after the outbreak in China.

After sending an email in January asking for possible collaborations, there are currently 99 fact-checking organizations working together and have done more than seven thousand fact-checks on news surrounding the virus. “This means we are covering more than 70 countries in the world. We're checking content in more than 40 different languages,” Tardáguila said.

Tardáguila emphasized how important it is to work in collaboration when fact-checking. “We would not be able to fact-check that content, that amount of content by ourselves if we didn't work together.”

CoronaVirus Facts has chat bots in WhatsApp and has also given birth to databases in Portuguese, Spanish and Hindi. “I know WhatsApp is not very heavily used by English speakers in the United States, but it's a big, big, big thing in the rest of the planet. So, we managed to develop a checker bot that is fed by the database of fact-checks.”, said Tardáguila.

Misinformation is proving that fact-checkers need to work more and faster, and need to keep precision, according to Tardáguila.

“We have opened a call for papers and then we now have a bunch of wonderful researchers that are going to take a deep dove into the database and, you know, tell good stories,” Tardáguila mentioned. “No, we can't just stay in the unit of fact-checking because it seems like we will be doing this forever and ever and ever. So, we have to work together.”