Journalists in St. Vincent fight ash and with limited resources to cover historic eruption of volcano in middle of pandemic

Journalist Kenton X. Chance was headed with a pair of friends to the northeastern part of St. Vincent to report on the latest developments following the continued explosions of La Soufrière.

It was the afternoon of April 13, and the volcano was in its fifth day of eruptions. Houses and cars were caked in thick volcanic ash, and residents of the small Caribbean island used brooms and shovels to clean their roofs and walkways.

Driving back towards the “red zone,” closer to the volcano, Chance recalled seeing the devastation caused by La Soufrière three days earlier. 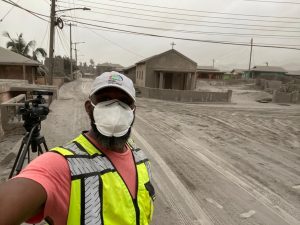 “There was a lot of ash on the ground, a lot of ash in the air,” Chance told LatAm Journalism Review (LJR). “In the areas where it was dry, we had as much as 3 inches of volcanic ash on the street.”

It was mid-afternoon, but the sky was so dark that roosters started to crow.

“I was saying to my friend, ‘It seems as if the roosters themselves were tricked into believing it was getting near dawn rather than being the middle of the afternoon,’” Chance recalled. 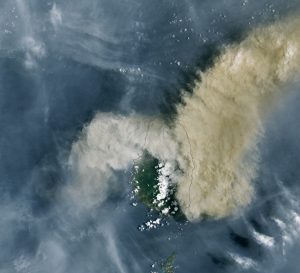 Chance and other journalists on the 150 square mile island are showing how residents are grappling with the continuing eruptions, fallen ash, evacuations, water shortages and damage to homes in the midst of a global pandemic.

The island has been divided into green, yellow, orange and red zones, with the latter being closest to the volcano.

“We have been able to go into the red zone as far as is physically possible, right up to Sunday night,” Clare Keizer, editor of Searchlight, told LJR. “The fact is that some of the areas are just impassable by land because they’re blocked by large boulders and the road infrastructure has been damaged and so on.”

Access to the red zone has been restricted and residents were ordered to evacuate, with some having to be rescued as the eruptions continued.

“To be honest, it is just too dangerous to be there and they have intensified their efforts to get out those people who remain there,” Keizer said.

Some journalists have had to adapt their ways of contacting sources because of the difficulty of getting around the island.

“Travelling is possible, but not always advised,” freelance journalist JP Schwmon told LJR via WhatsApp. “The fallen ash turns to sludge when it rains. Also, COVID-19 concerns present their own accessibility challenges. So, interview subjects are more often than not contacted virtually.”

Schwmon, who has been reporting on the eruptions for Asbert News Network, uses WhatsApp, social media and landlines to carry out interviews.

For Chance, limited resources also affect how he reports on the natural disaster. He’s the founder and sole news producer at iWitness News and has been covering the La Soufrière eruption with the help of a friend who drives him to reporting spots and another who helps with equipment.

“I’m a trained professional, I’m a trained journalist, but resources are important,” he said, later adding that his site’s sole source of income is advertising and the rare donation.

The lack of resources does not seem to have translated to a lack of popularity. The Facebook page for his site, where he posts videos, photos and news items, has more than 116,000 followers. 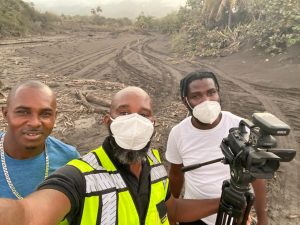 Journalist Kenton X. Chance reports from Rabacca in the southern part of the red zone in St. Vincent on the evening of April 13. He is accompanied by friends Randy Westfield, left, and Javin Gordon, right.(Courtesy)

Journalists are split on how easy it has been to get information from the government and scientists.

Briefings from the prime minister, which also feature volcanologist Richard Robertson, director of the Seismic Research Centre at the University of the West Indies (UWI), are aired on NBC Radio, the national radio station of St. Vincent.

During the briefings, Prime Minister Dr. Ralph Gonsalves asks Robertson questions about the science behind the volcanic eruption and possible impacts on the surrounding areas. The prime minister also interviews management officials about the water supply and clearing roadways, and gives his own updates on issues like security, international support and COVID-19.

According to Chance, non-state media are not given the opportunity to ask questions, including about the volcano and how the government is handling the situation.

“The prime minister is not a journalist,” said Chance, who has covered various natural disasters in the Caribbean. “A journalist is wired differently. We go out into the field and we interact with a lot of people.”

He would prefer that conferences were offered in which journalists were able to ask questions.

LJR emailed the prime minister’s office regarding the briefings and access to the government official but received no response as of publication.

In Keizer’s opinion, it has been particularly easy to get scientific information about the volcano and eruption from the Seismic Research Centre at UWI.

In addition to the briefings on NBC Radio, the center posts updates on social media twice daily, and has said that interview requests can be made via email or WhatsApp.

In terms of meeting safety needs for reporters, regional journalism associations are coming to the aid of their colleagues on St. Vincent.

The Association of Caribbean MediaWorkers (ACM) has carried out a needs assessment for media workers in St. Vincent and was sending a shipment of protective equipment to the island on April 14 as a joint effort with the Media Institute of the Caribbean, according to Wesley Gibbings, ACM member and founding president. The shipment included goggles, N95 masks, boots, raincoats, gloves, flashlights and hand sanitizer. An ACM representative on the island is coordinating distribution. 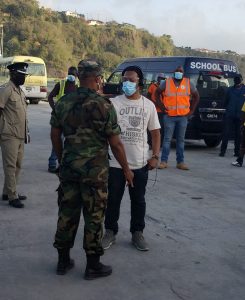 “The most important thing is the protective gear, but bottled water is also very important. The water situation has made the eruption and the evacuation even worse,” Keizer said.

“We are very concerned about the plight of our people in St Vincent and the particular challenges of media workers,” Gibbings told LJR. “This is a time that emphasizes the need for strong, vibrant and independent journalism in telling the stories that need to be told. This challenge is not one that's going to go away anytime soon. The work of the media is going to be a key pillar of the rebuilding process.”

Recent problems with La Soufrière began in December 2020 when lava began flowing and gas started to be released from the volcano. But it was not until the morning of April 9 when an explosive eruption finally took place.

Explosions continued, with the latest starting at 8:30 pm on April 13. It brought tremors, earthquakes, more ashfall and pyroclastic density currents (PDCs), according to the Seismic Research Centre of UWI. Particularly dangerous and hot, PDCs are “ground-hugging flows of ash and debris,” according to the Seismic Research Center. The scientific organization also said lahars, or mudflows, were reported.

“If we live on a volcanic island, and St. Vincent is not unique in that regard, we really have to learn to live with the volcano,” Robertson said during the April 14 morning briefing on NBC Radio.