“Innovative Journalism in Latin America,” the new free e-book from the Knight Center, is now available in English and Portuguese.

This new publication, available free of charge from the Knight Center digital library, compiles all the articles in the series "Innovative Journalism in Latin America" published on the Knight Center's blog between December 2016 and April 2017. It also includes several short guides in which different experts offer practical advice to improve journalistic activity online. 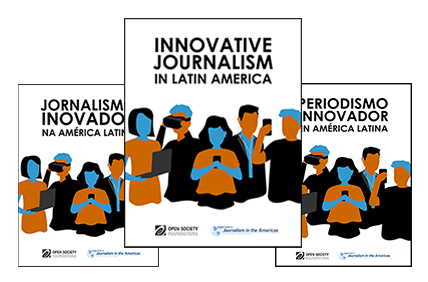 Both the series and this book have been made possible by the generous support of the Open Society Foundations Independent Journalism Program.

"We are grateful to the OSF's Program of Independent Media for the grant that made it possible for the Knight Center to share the experiences of digital innovation led by Latin American journalists," said professor Rosental Alves, founder and director of the Knight Center for Journalism in the Americas. “In times of quick transformations in the media ecosystem, journalists and media organizations around the world are eager to learn more about innovative projects. We are happy to take this opportunity to share so many experiences from Latin America."

The Spanish version of the book was launched on April 23 at the 10th Ibero-American Colloquium on Digital Journalism. This event brings together journalists, media executives and academics from Latin America, Spain and Portugal to discuss the latest developments in online journalism in the region. Traditionally, it is held the day following the end of the International Symposium on Online Journalism (ISOJ).

Teresa Mioli, content coordinator of the Knight Center, and Ismael Nafría, a journalist in residence at the Knight Center during the 2016-2017 academic year, were co-editors of the blog series and the digital book "Innovative Journalism in Latin America.” The Knight Center also recently published Nafría’s book "The reinvention of The New York Times" in Spanish.

For this series, the Knight Center covered projects from 47 media organizations or sites from 11 countries in Latin America, and the United States.

The articles included in the series address a multitude of topics related to digital journalistic innovation, such as the development of virtual reality and 360 video projects, the use of Facebook Live or Periscope and the adoption of new digital narratives. Successful podcasts, transnational reports, data journalism and fact-checking projects are also covered. Additionally, the book takes an in-depth look at projects or media outlets that reach new audiences in innovative ways.

In all cases, there is concern about how to succeed financially while carrying out these digital innovations. There are also cases of entrepreneurs in the field of digital information who are betting on new models.

The brief guides located at the end of the book were written by leading journalists in Latin America and Spain.

The book can be downloaded for free in English, Spanish or Portuguese from the Knight Center’s digital library.

In the library, you’ll also find links to two additional new books recently published by the Knight Center: “The Reinvention of the New York Times: how the ‘gray lady’ of journalism is adapting (successfully) to the mobile era” by Ismael Nafría (in Spanish), and “Global Journalism Education: Challenges and Innovation,” edited by Robyn S. Goodman and Elanie Steyn (in English).