Latin America ties with Asia as the regions with the most murders of journalists between 2016 and 2020, UNESCO report says

A total of 123 journalists were murdered for reasons related to their profession in Latin America and the Caribbean between 2016 and 2020. That places the region in a tie with Asia Pacific as the areas with the highest number of homicides of communicators in that period. 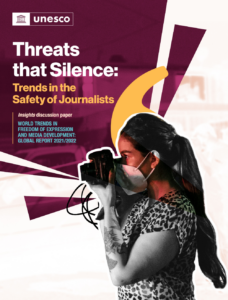 The foregoing is mentioned in the UNESCO report “Threats that Silence: Trends in the Safety of Journalists,” published on the occasion of the International Day to End Impunity for Crimes against Journalists, which is observed on Nov. 2.

For the period between 2016 and 2020, UNESCO recorded 400 murders of members of the press globally. Although this figure represents a decrease of 20 percent compared to the previous five years, the levels of impunity in these cases continue to rise, as do incarcerations and other types of attacks on journalists.

“The past five years also show the importance of considering other rising levels of threat against the safety of journalists, threats which not only violate press freedom and the right to free expression, but can also harm and intimidate journalists in ways that impact negatively on their ability to keep the public informed,” the organization wrote in the report.

Mexico ranks first in the number of murders of journalists by country between 2016 and 2020, both in the region and in the world, with 61 recorded cases. In Latin America, it isfollowed by Brazil, with 14 homicides; Guatemala, with 12; Colombia and Honduras, with 11 each; and El Salvador, Haiti, Peru, the Dominican Republic and Venezuela, with two cases each. Barbados, Chile, Nicaragua and Paraguay appear in the report with one case each.

Impunity is another aspect that has increased throughout the world. Eighty-seven percent of the murders of journalists recorded globally since UNESCO began its monitoring in 2006 remain unresolved or without information in this regard.

By region, Latin America and the Caribbean ranks fourth in levels of impunity for these crimes, with 78 percent cases unresolved: of the 298 cases reported between 2006 and 2020 in the region, 65 were resolved, 219 are ongoing or unresolved, and no information was received in 14 cases.

Latin America is preceded by the Arab regions (98 percent), Asia-Pacific (89 percent) and Africa (87 percent) in levels of impunity.

“At the country level, journalist killings and impunity rates are typically proportional, and high rates of fatalities are associated with high rates of impunity,” the report said. “As journalist homicides go unresolved and unpunished, there is little to deter the continued threat of violence.”

“Rather, the killing of journalists—and impunity for that crime—is a unique issue across the globe, reinforcing the clear intentionality in targeting media professionals,” the report said.

Journalists in Latin America also face other threatening situations with effects on their physical and psychological safety, including threats of violence both online and through other media. Of 139 journalists killed between 2011 and the end of 2020 in Mexico, Brazil, Colombia and Honduras, 41 percent had received threats prior to their death, according to a report by Reporters Without Borders cited in the UNESCO report.

Despite the worsening of conditions to practice journalism in the world, the report indicates some of the measures that have been taken in some countries in recent years to improve the safety of communicators.

The organization highlighted that Latin American countries such as Brazil, Colombia, Ecuador and Paraguay have established monitoring and protection measures on incidents of threats and violence against journalists and human rights defenders.

Likewise, the document emphasized inter-institutional cooperation, as well as reforms to law enforcement procedures to promote the safety of those who practice journalism that have been carried out in several countries, including some in Latin America.

Ecuador, for example, has implemented reforms that include considering intimidation of journalists as a crime under the criminal code, as well as including threatened journalists under victim and witness protection mechanisms, according to the report.

Mexico created a special department within the Attorney General's Office to investigate crimes against freedom of expression. Similar departments exist locally in some states. Guatemala, for its part, reported the creation of the Division on Crimes Against Journalists within the Public Prosecutor’s Office, the report said.

The United Nations General Assembly proclaimed Nov. 2 in 2013 as the International Day to End Impunity for Crimes against Journalists in a resolution urging Member States to implement measures against the culture of impunity in violence towards the press. The date was chosen in commemoration of the murder of two French journalists in Mali that year.