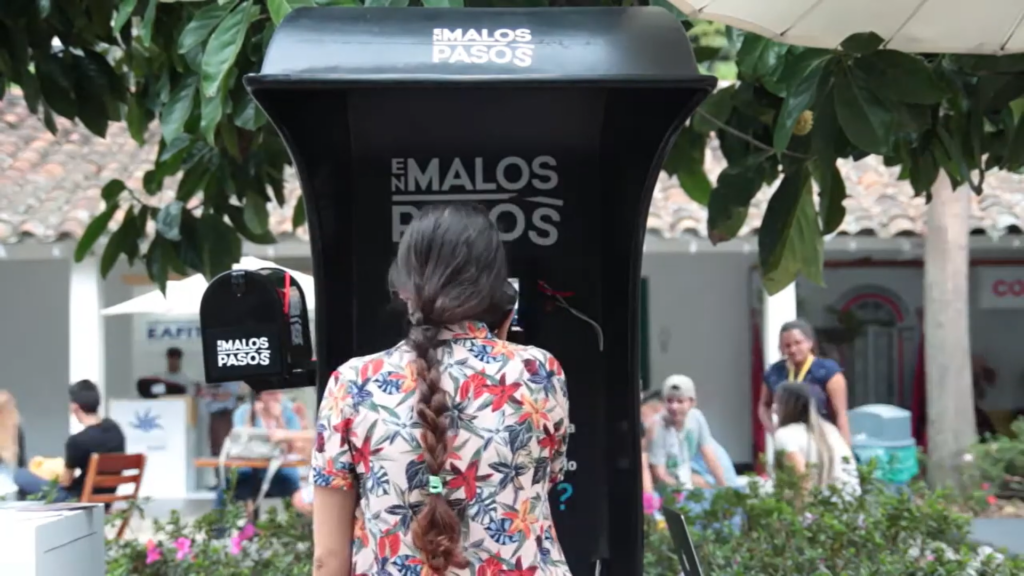 An art installation sponsored by the Dromómanos foundation that blends art, data, and activism. (Credit: Screenshot)

The word “data'' is usually associated with boring spreadsheets or incomprehensible files with innumerable values. However, through art, it’s been possible to turn often tedious data into stories and experiences with a greater power to connect with different audiences.

In recent years, Latin American journalism (which includes investigative journalism based on data, statistics and numbers) has used artistic approaches to tell stories: plays, exhibitions, fanzines (thematic publications), creation of analog and digital visual pieces, and immersive projects, among others.

Art, understood as a communicative activity in which ideas and emotions are expressed, can be merged with journalism as long as data objectivity is respected. “What we try to do as journalists is to make an impression and have an impact. So, exploring other formats to move, to intrigue, to inform is necessary. Art is among them. You can find a creative way of communicating, but without losing sight of the rigorous and investigative foundation that characterizes journalism,” Alejandra Sánchez Isunza, director of Dromómanos, told LatAm Journalism Review (LJR).

LJR spoke with journalists, infographers, editors, and data scientists to understand the coming together of data and art, and to learn about current projects being developed in Latin America.

More striking than the news

After several months of conceptualizing the idea, Villatoro decided to present the results of his research in an artistic way in order to have a greater impact. This resulted in Brecha, an installation based on data visualization.

“I had this idea because I’ve always been a multimedia journalist. When I visited museums and art galleries, I felt that artistic research was akin to journalistic research. You try to delve into a topic and explain it from an original angle,” Villatoro told LJR. “The issue of 'unpaid work' and racial and gender inequality is not as striking in a news format. I thought that data had to be explored more as a political/cultural movement. Then, an opportunity in a gallery came up,” Villatoro said.

Currently, his work has been shown in several Latin American countries (El Salvador, Brazil, Costa Rica, Honduras, Argentina y Ecuador). And it has inspired other journalists to work in this process of exploration to translate data reports into art.

In 2017, as part of the programming of the Central American Journalism Forum of the digital news outlet El Faro, there was a call to participate in an exhibition of data journalism and art. Works such as Wanted!, an installation by Otto Hernández, a visual artist, based on the article “The 11,000 Salvadorans that nobody is looking for” by Karla Arévalo of El Diario de Hoy was shown there. Also, The Raping Habit, an installation by Carla Ascencio and Andrea Burgos from El Faro, based on the article A Paradise for Child Rapists by Laura Aguirre and Malú Nochez. Artists and journalists came together to tell stories in different formats.

Later, through Abrelatam Condatos, a meeting point for the data community in Latin America, new experiences and several exhibitions came about that combined data and art. 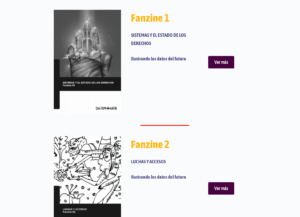 Examples of two fanzines from Latin America in which a specific topic is explored blending data and art. (Credit: Screenshot)

“Increasingly, there is a commitment to innovate in the way we tell stories and in the way we connect with audiences. From alternative or independent media, there are more commitments for both worlds,” Patricia Trigueros told LJR. Trigueros is editorial coordinator of Fanzines de Datos+Arte, which are texts with illustrations where the future of data in Latin America is discussed.

Another example of innovative proposals to tell stories is the Dromómanos On the Wrong Track booth project, where art, activism and journalism converge to give a voice to people affected by violence in Latin America. The idea, performed in 2018, consisted of a telephone booth placed in a public place where a one-minute video of people telling their stories of violence was broadcast and the audience could respond in turn.

“The idea was that if the protagonists told their own story, it would have a greater impact than reading it in a newspaper. The booth was a created experience to develop sensitivity and empathy, with journalists as intermediaries. I don’t know if this is an artistic approach, but it’s a different journalistic approach where we look for a better-suited format in order to touch people and make a deeper impression," Sánchez Isunza said.

More recently, in 2021, Andrea Burgos from the feminist magazine Alharaca from El Salvador created an artistic installation with three pieces entitled "Eclipsed Bodies," based on research by Fátima Escobar on the precariousness of the health system in that country with regards to women. The installation was presented in a cultural space in the Salvadoran capital.

In 2020, in the midst of the COVID-19 pandemic, Abrelatam launched its first Datos + Arte Award. The goal, according to organizers, was to connect data with different audiences and users, promote projects that could have an impact during a health crisis context and encourage artistic experimentation and the use of data.

In its first edition, the winners were the work National Flag by Nicolás Franco, in which the national flag of Colombia was modified; the work Estrangement(s) by Diego Sac, which compares the kilometers the artist covered between 2019 and 2020, according to a Google Maps geolocation history; and the work Memorial by Miguel Guevara, which analyzes the frequency of surname repetition in a list of detained/disappeared persons between 1973 and 1990, during the Chilean dictatorship.

“It has always seemed to me that data visualization goes beyond the field of data science and can also be an expression that evokes different sensations in people, which for me is the definition of art. When I saw the contest’s submission call, it seemed like the right time to validate what I’d been thinking about for a long time. In addition, the full title included "from home," which also made us realize we were in the midst of a pandemic but yet we wanted to continue doing our work, our creations, in spite of being home-bound,” Guevara told LJR. In addition to winning third place in the contest, he is the director of the Engineering School’s Data Science Lab at the University of Playa Ancha in Chile.

Datos + Arte maintains its exhibition on its website and the Datasketch team in Colombia also presented the selection of works at its headquarters in Colombia, in June 2021, as a way to promote and keep alive the use of data to communicate in different formats.

Much remains to be done

During the last two years of the COVID-19 pandemic, in-person gatherings in physical spaces which the visual language of art calls for, have decreased. However, people interviewed for this article agree that there is a need for more institutions to encourage the fusion between data, journalism and art. As well as, from a journalism perspective, the need to deepen the visual aspect beyond infographics, photojournalism or video.

"Within journalism or the media, space for creative forms are few, in the understanding that journalism seeks to be "objective" and art can be quite subjective. Nor do media spaces take the risk of making "mistakes" or experimenting (which creativity entails),” Diego Sac, Guatemalan designer and infographics designer and second-place winner of the 2020 Datos + Arte Award, told LJR.

However, although journalism combined with art and data does not seem to be a priority at the moment, Sac believes there will always be journalists looking for creative ways to reach their audiences.

Guevara agrees about this lack in journalism. “In general, there is a growing willingness to use data science in the world of journalism, but more for utilitarian purposes such as a complement to press releases, rather than for purposes of artistic expression,” Guevara said.

“The use of more creative forms, by different professionals, has turned to media that can become massive, such as social networks. I see more professionals and politicians making TikTok videos than creating artistic statements that can stir emotions that lead to reflection and, hopefully, to action. As the cliché goes, ‘we live in a world of immediacy’ and making art is a long process,” Guevara said.