In the last 10 years, the way of doing journalism has changed. Journalists have also undergone a transformation that involves the emergence of digital media, a deepening of the culture of transparency, collaborative work, greater participation of women, changes in methodology and in the way in which content is consumed, and transformation of business models.

These topics were part of reflections of conversations of the first week of the 10th LATAM Forum of Digital Media and Journalism organized by Factual and Distintas Latitudes, in alliance with multiple organizations and universities throughout the continent. During the first five days of the forum, broadcast live through Zoom, 24 activities were carried out with panelists from more than 18 countries and the organization registered more than 1,082 people connected. 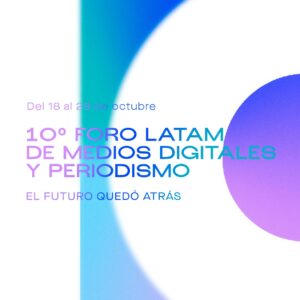 “At the end of this edition, about 650 panelists will have passed through the forum. So, we can say that any digital native media outlet in Latin America has participated in some of our activities during these years. This has been an innovative, but also resilient, space ... It will always be a forum that innovates, but without ceasing to be a diverse and plural forum," Jordy Meléndez, co-director of Factual and Distintas Latitudes, said during the opening panel. He also announced he was leaving the main organization of the event to give the next steps to new generations.

The table “Our long march: Media and journalists a decade away” was a look back at the past.

The conversation began by showing a photograph of each of the participants ten years ago at the first LATAM Forum of Digital Media and Journalism, in Mexico, sharing the same discussion table, but in person. They followed the dynamic by talking about how societies and the media have changed.

This was not the only table to reflect on the past. During the table entitled “What changed in 10 years? Digital media between cracks, schisms and the authoritarian drive,” journalist Daniel Moreno, director of Mexico’s Animal Político, spoke about the changes he’s seen in journalism in recent years.

"Journalism has taken important steps in terms of methodology, rigor and understanding that it is a hypothesis. These topics were not so prevalent 10 years ago. We have understood that the work of a journalist does not end when the period is placed at the end of a text," Moreno said.

However, not everything has been positive. Moreno expressed concern about the deterioration of journalistic spaces and the deepening of opinion spaces. For him, there is more interest in opinion than in verified information.

“Ultimately, the best journalism is done in digital media outlets. The worst journalism, too,” the director of Animal Político said.

Representation of women in media

The importance of diversity in newsrooms was a recurring theme during the first week of the forum. At the opening of the event, CEO and founder of Chicas Poderosas, Mariana Santos, opened the conversation on the low representation of women still present in Latin American media.

Santos regrets that despite advancements, in many cases, it seems the status quo remains.

Afterwards, there was a block of presentations on projects about diversity in newsrooms.

Mariana Alvarado, coordinator of the First Latin American Conference on Diversity in Journalism, stressed that the job of journalists is to serve the public, even if they sometimes forget.

"Diversity, equity and equality are not very present in media, although there are great advances. Diversity is covering with a gender perspective, but also covering the LGBT community, Indigenous peoples, people with disabilities," she said.

She also commented that the issue of diversity is not just inclusive language: “Diversity and inclusion does not end there. Language is only five percent."

The data also confirm the situation. During the forum, Eduardo Suárez, director of Communications at the Reuters Institute, spoke about a report it made on gender inequality in newsroom leadership. It concludes that only 22 percent of top editors  of the 240 media in the sample are women, despite the fact that, on average, women account for 40 percent of the total number of journalists who work in these places.

"One of the consequences is that now we see that many women feel mistreated because the media are not reflecting their realities or offering a real image of what their communities suffer," Suárez said.

Journalism from the provinces 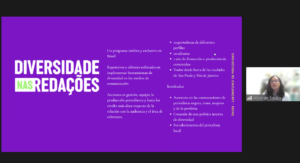 "Journalism from the provinces and cities removes its gaze from the center and puts it on the other realities that are being experienced, but are not being told at the national level," said Noelia Esquivel, journalist of La Voz de Guanacaste in Costa Rica.

There was also the opportunity to speak about the motivations that led the speakers to continue working at the local level despite difficulties.

"Beyond the passion that drives us all for journalism, my great motivation for doing local journalism is to be closer to the public and the freedom to collectively build an editorial line," said Rafael Gloria, editor of Nonada in Porto Alegre, Brazil.

Gloria's compatriot, Alice de Souza, editor of Revista Retruco in BraIl, spoke on another table about the possibility of innovating from the basis of local journalism. There she expressed that "doing local journalism is telling other parts of the country everything that does not arrive from the places where we are ... Local journalism is closer to the sources, the people and the audience."

Artificial intelligence as the future

The forum not only looked to the past, but also to the future of journalism.

One of the conferences was led by Ramón Salaverría, professor-researcher in the School of Communication of the University of Navarra in Spain and an expert with more than 25 years of experience in digital media. Salaverría dared to predict that, in the next few years, the creation of news will be a mix between the journalist's work and automatic generation from algorithms and robots. 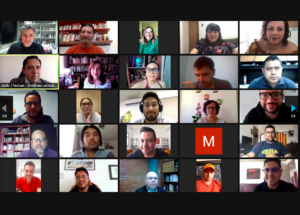 “Just five years ago, data journalism was only available to the media with a well-established team and with money. Technologies for doing data journalism have been democratized. My expectation is that something like this could happen with artificial intelligence technologies,” the professor said.

The table “How do we envision the future of journalism?,” which closed the first week of the event, also discussed this issue. Venezuelan journalist Laura Weffer expressed that she believes a lot in narrative journalism and that there is a function of the journalist that is difficult to replace by robots. “Every time I think people are consuming more stories and less formal information,” Weffer said.

The 10th LATAM Forum of Digital Media and Journalism organized by Factual and Distintas Latitudes ends on Oct. 29. The agenda of activities includes conversation tables and virtual workshops.