By Katherine Pennacchio and Júlio Lubianco

Spaces are public, audio-based chat rooms available within the Twitter app. They were created in the first quarter of 2021 as a response to the Clubhouse platform, only available for iOS devices, which gained popularity during the COVID-19 pandemic. Twitter Spaces can be described as chat rooms or a 2.0 radio show.

Any Twitter user, using iOS or Android, can create a Space or join in as a listener. Independent news outlets in Latin America and larger media such as the BBC or El País are using the tool as a digital strategy, to gain followers on social media and increase their audience.

"Twitter Spaces is a new, different format that allows us to listen to more interesting voices. We use it to position ourselves, to brand ourselves and obviously also to increase our presence in networks because we are a very young project, so we don't have a huge number of followers. Every time we do a Space on Twitter we grow faster than the daily average," Nicholas Dale, from EL PAÍS América, part of their Colombian social media team, told LatAm Journalism Review (LJR).

EL PAÍS América - Colombia began hosting Twitter Spaces at the end of August of this year. Since then, they have held one a week. The topics are diverse and are chosen by what’s in the public debate or trending in social media.

One of El País’ most popular Spaces took place on Oct. 19 with a topic far removed from political events. It was entitled 'Monotony: The meaning of Shakira's new song' and, as the name suggests, the conversation revolved around the lyrics of the Colombian singer's new song and her career. More than 7,700 people connected and listened-in to more than an hour of conversation. 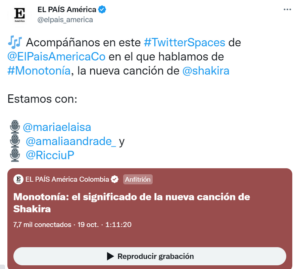 More than 7,700 people connected to the Twitter Space 'Monotony: the meaning of Shakira's new song'.

"On Twitter you find users who are much more tuned-in to current affairs, people who usually read the media and are informed. It’s very different from an Instagram user, for example. So it's the natural space for us as a news outlet," Dale said. "But, Shakira's Space was more successful precisely because it was outside of what we expected and not for the average El País reader. It was for a much broader audience and it worked very well for us."

Despite the current crisis the Twitter platform is experiencing, with a wave of massive layoffs after its purchase by tycoon Elon Musk and rumors of its closure, Spaces continues to operate normally.

Twitter Spaces are public. Listeners can be invited directly via a link. They can be listened to live or later, as long as the host choses the option to record the conversation. It also remains available for a month on the platform.

And, although it is an audio tool, it also provides the option of live subtitles. As far as participants, up to 13 people (including the host and 2 co-hosts) may speak for the duration of the Space.

In technical terms, Twitter Spaces are very simple. Participants connect from their cell phone and the discussion begins. No sound setup or control panel is required, as radio does.

However, not everyone is used to these tech tools. "We’ve been able to identify some problems. For example, interviewing people who do not use technology or older adults who are not used to using Twitter is not the most advisable thing to do. It can be a very interesting topic, but those technical issues can make you lose followers," Ana Carolina Griffin, editor-in-chief of EsPaja.com (Venezuela), told LJR.

It’s important for participants to be digitally literate, as this can lead to problems when it comes to guests connecting or participating fluently, Dale agrees.

One area in which Twitter Spaces do not differ much from radio spaces is in the production. The organizers must choose the topic, invite the participants or those who will lead the conversation, promote the Space so that more people connect and then, in many cases, serve as moderators.

Both El País América Colombia and Espaja.com chose Wednesday afternoons for their Spaces due to convenience in production. In this way, they use Mondays and Tuesdays to choose the topic and contact the guests.

"We’ve done well with Twitter Spaces. Every time we hold one, our number of followers grows. It's an additional workload, though. It's basically like producing a radio show. It's not as complex because we don't need a sound operator, but it can generate the same angst as a radio show, especially when a guest cancels or there's a change of plans," Griffin said.

EsPaja.com is a Venezuelan fact-checking digital news outlet. For more than 25 weeks, they have been hosting Twitter Spaces (a weekly one) where more than 34 guests (people leading the conversation) have participated. Their numbers are lower than El País America - Colombia, but up to 925 people have connected live.

For Griffin, one of the drawbacks of using Twitter Spaces is that you need a stable Internet connection and Venezuela has one of the worst Internet access signals in the world. It currently ranks 137th in the Speedtest index of broadband Internet speed. This has forced them, on occasion, to cancel scheduled Twitter Spaces or made some listeners to lose interest during the broadcast.

However, the tool has served as a window to address key issues such as misinformation during the COVID-19 pandemic or fake news related to the journey of Venezuelan migrants. And, in certain Twitter Spaces, they give listeners the opportunity to participate by asking questions or offering their views on the topic.

"Here, on Twitter, listeners have the freedom to tell interviewees whatever they want. This is necessary, especially in countries like Venezuela, where spaces for debate are usually closed. With this tool, a small space of freedom opens up."

In Brazil, digital native news outlets took advantage of the recent electoral campaign to experiment with Twitter Spaces. At JOTA, a website specialized in covering the three branches of government, the first Space happened right after the first debate between the presidential candidates. The timing was unfortunate: after midnight. But even so, the average audience was higher than JOTA's other live video broadcasts. 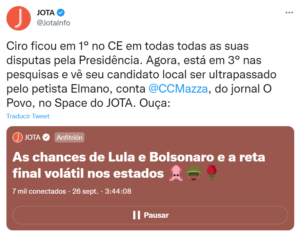 "Is it worth it? Let's give it a try. And it had a very good audience. On average, it was bigger than our live broadcasts on YouTube," journalist Iago Bolivar, JOTA's digital communications advisor, told LJR.

In just over two months of campaigning, including the second round of voting, JOTA's Twitter Spaces reached an audience of between 2,000 and 7,000 listeners. "In addition to our own team, journalists from local news outlets were invited to report on the elections in the states."

"Our differential was to anchor our coverage on tallying and statistical modeling [and not on opinion]. We are now studying how to do this while covering the new government, but we think it’s a very flexible and useful tool," Bolivar said.

Also during the election campaign in Brazil, Agência Pública maintained a weekly program on Twitter Spaces. But its first experience with the format happened in 2021, during the publication of an investigation that revealed that the founder of Casas Bahia, Samuel Klein, allegedly maintained for at least 30 years a scheme of sexual exploitation of children.

"Since this is one of the agency's biggest investigations, in terms of audience and impact, we felt it was important to innovate in the way we communicated it. Also to pry open a closer door with our readers. And Spaces makes it possible," Ravi Spreizner, Agência Pública's network coordinator, told LJR.

In the coming weeks, Agência Pública will use Spaces as part of its new campaign to collect donations from readers. This time, they are seeking funds to investigate actions kept secret during outcoming president Bolsonaro's government.

"Until January, we will talk about access to information and how to investigate what has remained hidden these four years. Then, we will keep the weekly slots. It will be called Re-Pública," Spreizner said. "We're thinking more and more about Spaces as a strategic tool, whether it's for fundraising campaigns or to leverage our research."