“We planted seeds for a work culture, a change of mindset in the [participating] organizations, around thinking about sustainability and incorporating key people for those [strategic] areas,” said Vanina Berghella, director of the Fondo Velocidad [speed fund] on April 3, 2022, during the 15th Ibero-American Colloquium on Digital Journalism, at the University of Texas at Austin.

The strategic areas for development in the ten media outlets are management and finance, sustainability, audiences, and product vision and culture. 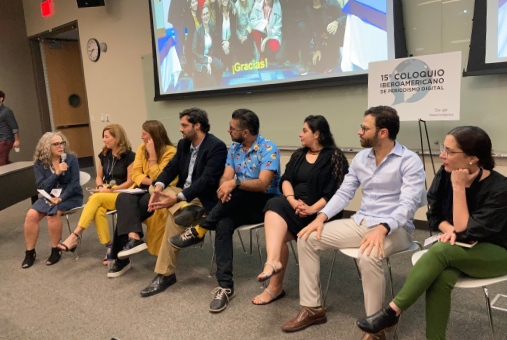 Panel of the Velocidad fund at the 15th Ibero-American Colloquium on Digital Journalism. (Photo: Paola Nalvarte)

Berghella opened the Colloquium with a presentation of the scope and challenges of the Velocidad acceleration program, which between 2020 and the end of 2021 advised, supported and financed improvements in each of the 10 participating Latin American media in order to re-empower their strengths.

The ten selected media, from nine Latin American countries, experienced a growth of up to six times more than the financing they received from Velocidad, said Berghella, adding to a revenue that exceeded five million dollars at the end of the program.

The participating media were Convoca, from Peru; Lado B, from Mexico; Cerosetenta, from Colombia; El Toque, from Cuba; El Surti, from Paraguay; +CIPER, from Chile; Ponte Jornalismo, from Brazil; El Pitazo, from Venezuela; Red/acción and Posta from Argentina.

The total investment of the program was US $817,000, in addition to another US $206,000 extra so participants could invest in “wellbeing benefits” during the pandemic, that is, so that they could cover the needs of their teams and thus be able to continue.

"We started the day of acceleration, the moment of consulting, the same week [the COVID-19] quarantine began in all of Latin America, so it was absolutely a complex process trying to organize ourselves," Berghella said. They faced the challenge of “combining the professional process with the personal issues of each of the individuals going through the acceleration and the pandemic. So there is an added value there regarding the commitment each one of the participating media had in the acceleration process.”

The program had two stages. In the first six months, the ten media outlets attended webinars, had thousands of hours of strategic and personalized advice with five expert consultants from the region. In the second stage, which lasted ten months, we worked with six of the ten teams. In addition, up to 40 tactical advisors, or process consultants, worked with the teams during both stages.

Velocidad was an intensive and deep immersive model, which serves as a learning model for similar processes, said its director.

Velocity is run by SembraMedia and the International Center for Journalists (ICFJ), with financial support from Luminate.

Based on this experience, Velocidad is developing documents and learning materials with six case studies of the media generated during the entire acceleration process, as well as learning guides on the main focus areas of the program.

Other participants of Velocidad panel ​​in the Colloquium, joining Berghella, were Claudia Urquieta, community editor of +CIPER from Chile; Agustina Campos, general manager and director of FIBRA, from Red/acción from Argentina; Diego Dell'Agostino, co-founder of Posta from Argentina; Javier Melero, co-founder of El Pitazo from Venezuela; Alejandro Valdez Sanabria, director and co-founder of El Surti from Paraguay; and Isabela Ponce, strategic consultant for Velocidad and founder of the GK media outlet in Ecuador.

"To learn is to surround yourself with people who know more than you in the areas the news outlet needs," Dell'Agostino said. "We went from being a start-up to being a company that grew 200% the first year and 400% the second year."

Urquieta, from +Ciper, said that being one of the oldest media outlets participating in the Velocidad program, they had to “reinvent themselves.” When they lost their main funding in 2018, +Ciper implemented a membership system the following year.

“We had the public's trust” and had been around for 15 years, Urquieta said. However, thanks to Velocidad they now have a sustainability team that focuses on memberships and new revenue streams, she said.

For Valdez, from El Surti, the months he spent immersed in the Velocidad program don't seem like months but years, because of everything he's learned. Seeing that their strong point was graphic narrative, they began to offer consultancies and created Latinográficas, an initiative that seeks to promote visual journalism by offering production in addition to training, get-togethers and workshops for journalists, illustrators, and designers from the region.

"In the Velocidad process, we went from publishing one 800-pixel JPG a day to creating a regional organization that specializes in turning information into action," Valdez said.

In Red/acción, Campos said, during the acceleration process they realized they had many brands and many things to say, which is why they decided to create the content agency Estudio Fibra, to take advantage of the journalistic capital they already had.

“We created this new business unit that offers editorial narratives to companies and organizations. Today, this new business unit generates 53% of our income. Velocidad helped us consolidate this new line of business. We still have a lot [to do], but today without [the support of] others it’d be very difficult,” he added.

Thanks to Velocidad, Melero of El Pitazo said, they managed to reduce their team, redefine roles and double their page traffic in one year, in addition to increasing their income by almost 500% in the past year.

One of Velocidad’s strategic consultants and director of GK from Ecuador, Isabela Ponce, said one of the first challenges she found in the three media outlets she consulted with during the program was a lack of role definition.

Helping them realize they had to delegate responsibilities and have someone specializing in  each area was hard. It was a process for the participants to learn to let go, Ponce said. "All growing media have to face that."

One of the questions from the Colloquium attendees for the Velocidad participants was what is there after Velocidad, do they feel orphaned? The panel responded almost in unison, that the goal was to be without Velocidad and keep moving forward. "They prepared us to survive," Posta's Dell'Agostino said.

One of the conclusions from the Velocidad participants is that the media must diversify their income in order to be independent and sustainable. They can implement membership services, include community participation, offer editorial services, consultancies, training, among others, as long as they fit the profile of each news outlet.

And not depending too much on advertising "is key" to editorial independence, the director of the Knight Center for Journalism in the Americas, Rosental Alves, said.