Verificado 2018, a collaborative journalism project from news site Animal Político and AJ + Español that has dozens of media and civil society organizations as allies, served as a catalyst for truthful information throughout political campaigning season and on election day in Mexico.

The editor-in-chief of Animal Político and director of Verificado 2018, Tania Montalvo, told the Knight Centerthat during electoral campaigns, false news concentrated around candidates leading in the polls. However, she pointed out that in the days leading up to the election day, information about the process itself increased, as well as what citizens needed to know to exercise their right to vote.

"During the electoral process, Andrés Manuel (López Obrador) was always a leader in the polls, so we saw how Andrés Manuel always led in false news," Montalvo said. "A lot of false news was generated about him and that was changing according to how the mood of public opinion was changing.”

During the electoral campaign, Verificado 2018 had three axes of work: stopping the viralization of false news, disproving disinformation by checking the candidates' discourse and producing 'explainers' on information about which people had expressed doubts, Montalvo said.

The Verificado2018 team was organized in separate work tables during election season: a verification table of 12 people from the Animal Político newsroom and a visual and multimedia table led by five people from AJ+ Español.

As explained on its website, the methodology included analyzing information that went viral in media and on social networks and that had more than 1,000 interactions on Twitter, Facebook and other networks or that became news that influenced public opinion.

Then, at the assignment or filter table, Montalvo explained, they saw what was "hot" and determined how to verify it.

"Maybe making a video, a report or with the help of an Animal Político field reporter," she said. Then the information went to the production table, where the AJ+ Español team, with its videographers and designers, worked on it. The fact-checkers and data journalists of Animal Político analyzed the information and reporting, and then this content went to the editing table to later be published on social networks and on the allied media sites.

On election day, Montalvo said, Verificado 2018’s work was more of a utilitarian service for voters. "We concentrated on what people were asking us. There was always contact and dialogue with the citizen, who sent us information with the hashtag #quieroqueloverifiquen (I want it verified), by email, Whatsapp, Facebook, (etc). They sent us their doubts or what they wanted us to verify, and we gave priority to that information, also privileging the public interest," she explained. 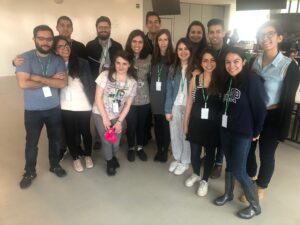 In the course of July 1, the needs of voters were changing and past noon the news users sent to Verificado was no longer concerned with the information on how and where to vote, but related to reports of the theft of ballot boxes and acts of violence in some states, such as Puebla.

"We were prepared to disprove these alleged outbreaks of violence that had the purpose of discouraging the people who were going to vote. But the opposite happened, the outbreaks of violence that people began to report for verification, in fact, did occur,” Montalvo said. "Yes there were thefts of ballots in different states, and shootings also occurred in different voting locations in Puebla, and we focused on verifying that."

At the end of the election day, Verificado noticed a "silence" of false news. When presidential candidate Manuel Andrés López Obrador prevailed over the other two candidates who followed him in the polls, people began to mainly share news of his victory.

"We are not seeing any outbreaks of false news, not in networks, that we monitor ourselves, nor that people are sending us. We even noticed that there were some Twitter accounts that were focused on attacking Verificado’s work all the time, and right now, they have simply stopped tweeting," Montalvo said.

For the director of Verificado 2018, it was clear that verification, fact-checking, is not a fad but an indispensable step in journalism and key for any journalistic publication.

"I am convinced that the verification of information is journalism, it is simply that, that it should be part of our daily work," Montalvo said. According to its director, Verificado 2018 put front and center the importance of always verifying facts, of everything that is reported.

“While the press repeated triumphalist speeches of any of the candidates, Verificado 2018 always went a step further by saying: ‘It's not true; the data is deceptive; it did not happen in the period in which the candidate is quoting it,’" Montalvo said. One of the objectives that the team’s work achieved, explained its director, is that it managed to make readers and citizens begin to doubt the information they read and heard from the candidates themselves and the news that they and their followers spread.