The intense mining activity that takes place in a vast area of the Venezuelan Amazon inspired a group of journalists interested in social and environmental issues to work collaboratively across borders. 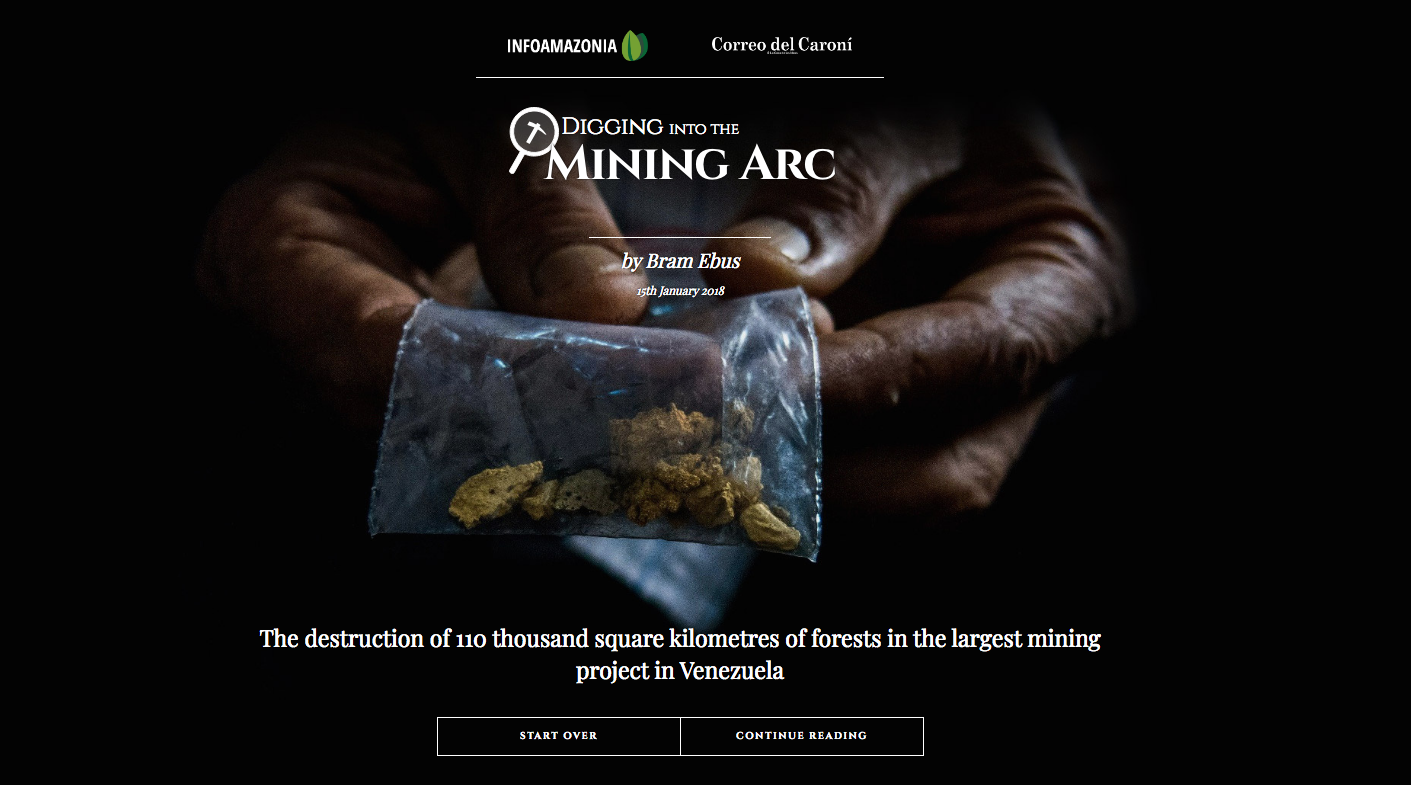 This is how the Venezuelan newspaper Correo del Caroní, Brazilian site InfoAmazonía and Dutch investigative journalist Bram Ebus came to spend months working on the innovative report "Digging into the Mining Arc,” recently recognized by the Online Journalism Awards.

Gustavo Faleiros, coordinator of InfoAmazonía, told the Knight Center that after meeting Correo del Caroní editor Óscar Murillo during the Gabriel García Márquez Journalism Festival in 2016, they talked about the need to report on the contentious area known as the Arco Minero. Faleiros invited Ebus to participate in the project, since he knew of his interest in writing about that area of southern Venezuela.

Ebus and two other journalists from Correo del Caroní, Wilmer González and Leonardo Suárez, carried out the fieldwork touring the Arco Minero for three months. They interviewed miners and their families, indigenous people in the area, politicians, activists and academics.

Regarding his experience, Ebus told the Knight Center that the contacts obtained by Correo del Caroní and its reporters in the Arco Minero opened many doors, because they have a large network in the state of Bolívar.

"It is always key to have contacts from the same region, who largely give legitimacy to the reporter's visit and, therefore, security," he said. 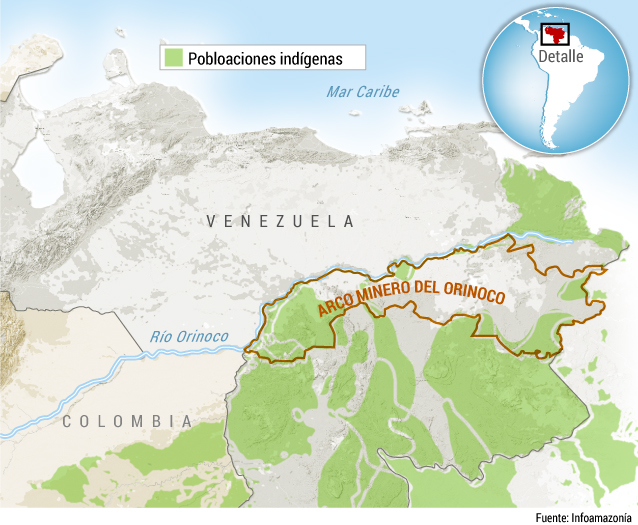 Screenshot of Mining Arc of the Orinoco created by InfoAmazonía

"The challenges of reporting in Venezuela, and especially in the south of the country, were plentiful. The lack of cash, problems accessing fuel, National Guard checkpoints and basically the complete militarization of the mining areas created several disadvantages," Ebus said.

Ebus was detained for 24 hours on Sept. 21 by agents of the Venezuelan National Guard while doing field work in the Arco Minero. According to the reporter, it was key to have made several contacts with NGOs working in the area, to have local support and to know the embassy of his country in Venezuela.

When Ebus, González and Suárez returned from their trip, they brought back scores of photographs and video, many of which would become part of the final multimedia investigative report, which is available in Spanish, English and Portuguese.

Murillo from Correo del Caroní and Faleiros from InfoAmazonía were responsible for editing the text. In turn, Stefano Wrobleski, one of the editors of InfoAmazonía, was in charge of editing the platform created by one of the members of his team of developers, Miguel Peixe.

"We knew that after three months in the field, our reporter (Ebus) would return with a lot of texts, photos and videos and we needed to think of a versatile design that would stand out beyond the text – especially the maps, that generally require more viewing space,” Wrobleski told the Knight Center.

According to Wrobleski, they wanted to give a new space to the report taking into account that multimedia content in the middle of text tend to distract the reader and that very long pages discourage reading.

"The way we did the design, the multimedia content is directly connected to the text, serving as a complement, but with equal importance," he explained.

In the report of 10,000 words and dozens of images and videos, InfoAmazonía used a technique called "scrollytelling." It allows the reader to continue reading the text without multimedia content interrupting it. This makes it so the different layers of content move dynamically while the reader navigates the text, the editor of InfoAmazonía said.

The dynamism of the report is such that when the audience reads the first sentence about a miner with muddy hands throwing rocks into a mill, they can also see the man, his hands, the rocks, the mud and the spinning wheel playing in a video to the right of the text. As the reader reads and scrolls, new photos, maps and video appear on the right to complement the developing story.

The jury for the Online Journalism Awards, which recognized “Digging into the Mining Arc” for innovation in investigative journalism, said the “digital presentation also worked to add value to the text without being a distraction.”

"Based on the experience of Arco Minero, we have generalized the idea of platforms with templates that we are adapting to other reports that we are working on in alliance with other media," Faleiros revealed.

Faleiros commented that they are very happy with the results of the report and highlighted that it’s essential to work with allies.

"Especially when we are talking about the Amazonian issue because it is often very difficult to establish the connections that exist between two countries or show such complex issues, such as this one of the Arco Minero, to an audience in Brazil or an international one," he said. 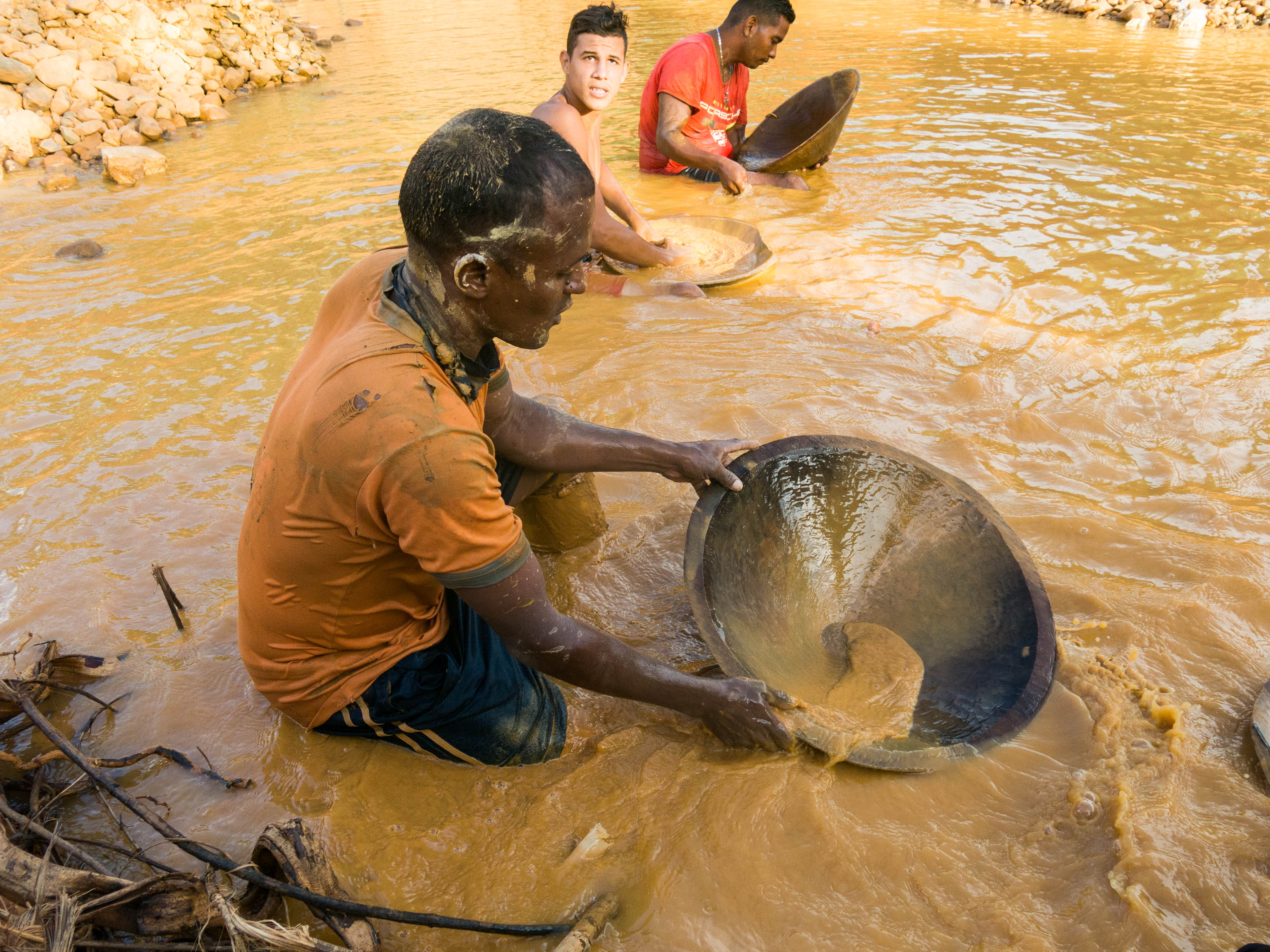 This collaborative report was funded by the Pulitzer Center on Crisis Reporting.

When speaking about the project and the recognition it received, Faleiros and Ebus are quick to express concern for one of their collaborators from Correo del Caroní to whom they dedicated the prize from the Online Journalism Awards.

González, a photojournalist from Correo del Caroní who participated in the report on the Arco Minero, disappeared a few months after the fieldwork for the report concluded, according to the Venezuelan newspaper.

According to Correo del Caroní, his family has not heard from him since March of this year, when he communicated with them from a mining area in Piacoa, in the Delta Amacuro State, north of the State of Bolívar.