The association Periodistas Desplazados Mexico (Displaced Journalists Mexico) is asking the new government of President Andrés Manuel López Obrador to politically and legally recognize journalists and media workers who are victims of forced internal displacement caused by violence in the country in the last decade. 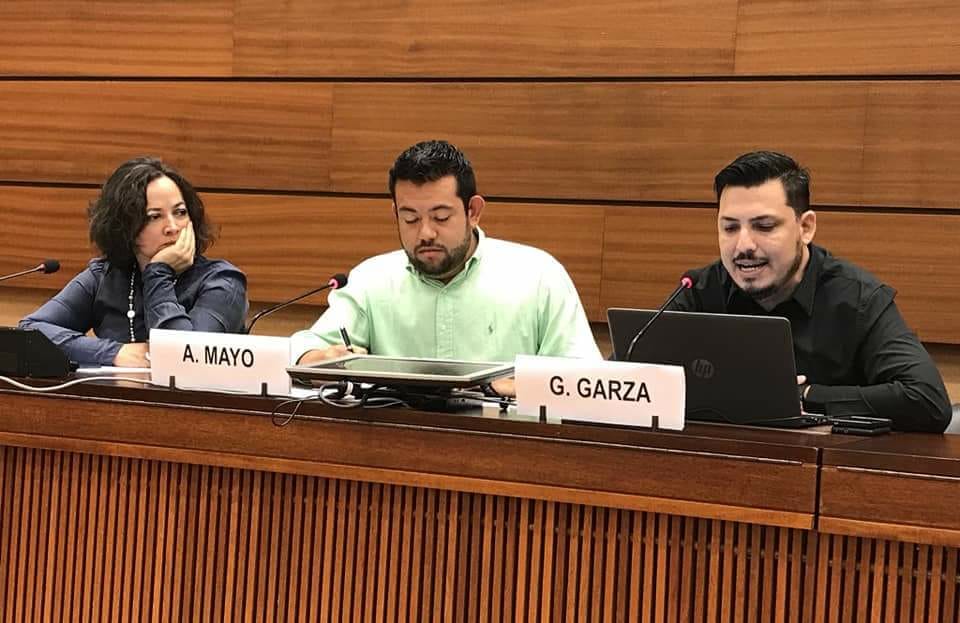 Gildo Garza explaining the situation of displaced journalists in Mexico to the U.N. (Courtesy)

According to the association, of the almost 330,000 people that have been internally displaced between 2009 and 2017 in Mexico –registered by the Mexican Commission for the Defense and Promotion of Human Rights (Cmdpdh, for its initials in Spanish)– there are 70 journalists and media workers who have had to move cities with their families, leaving everything behind.

"We have a very big conflict in Guerrero, Tamaulipas and Veracruz, which are the states with the most aggressions against media workers," Gildo Garza, representative of Periodistas Desplazados México, told the Knight Center. "In Coahuila and Chihuahua, in the north, we have gender violence against women colleagues that we are also attending to.”

Conversations with the new government

The transition group of the new government of López Obrador – who will take office on December 1 of this year – has been organizing a series of Forums for the Pacification and Reconciliation of Mexico in different parts of the country since the beginning of August. The objective is to address issues of violence in the country with groups of victims, activists, specialists and various civil society organizations that defend human rights, according to RíoDoce.

One of these forums will take place in Sinaloa on Sept. 14, at the Autonomous University of Sinaloa, according to Noroeste. The working tables set for this date will deal with the issues of drug trafficking, forced displacement, forced disappearances, murders related to crime and violence against journalists.

Garza explained that Periodistas Desplazados México will participate in one of the proposed work groups in Sinaloa, along with more than 20 journalists from the states most affected by the violence in the country. According to the journalist, there they will work with Alejandro Encinas, incoming congressman and the next deputy secretary of human rights, population and migration of the Ministry of the Interior (Segob), and with Olga Sánchez Cordero, the future head of the Segob.

The Knight Center reach out to two representatives on the transitional team of President-elect Manuel López Obrador, however, it did not receive a response in time for publication of this story.

According to Garza, in April of this year, the association that he represents and other civil society organizations succeeded in getting the proposed Law for the Attention to Victims of Forced Internal Displacement to be evaluated in congressional committees. "Right now it is frozen because of the administrative change and the new government, but it was already being revised. This was an earlier initiative but Periodistas Desplazados MX gave the main push to propose it as a law," Garza said.

The journalist – who also lives in the reality of internal forced displacement after receiving death threats and suffering a smear campaign by organized crime in 2017 – explained that his association is also proposing an amendment to the Federal Labor Law.

"The concessionaires and editors in media that still have the responsibility of guiding (journalists) must be responsible for their colleagues who are threatened or who suffer an attack. In most cases, the media outlet or editor always dismisses the colleague after he or she is threatened or assaulted. This cannot continue," Garza said.

Regarding the existing State resources to protect journalists, such as the Protection Mechanism for Human Rights Defenders and Journalists of the Ministry of the Interior that was created in 2012, Garza said that the mechanism can take up to one month to evaluate cases of attacks against journalists.

"That is time that many colleagues do not have. We have chosen sometimes to remove them from their places, with our own means, in less than 24 hours, put them in a safe place and wait for the Mechanism to take care of their situation," Garza said. "The Mechanism can no longer experiment and risk lives," he said.

As of October of this year, the Mechanism will not have a budget to continue providing preventive and protective measures to its more than 700 beneficiaries, warned the president of the National Commission of Human Rights (CNDH), Luis Raúl González Pérez, according to El Universal. González said during the presentation of the CNDH study on the situation of attacks on journalists in the country, that there must be a greater commitment on the part of the authorities to protect those who exercise freedom of expression as a professional activity in Mexico.

Regarding their association, Garza said that although it still does not have a website, it handles the cases of journalists in danger who reach it through Twitter and its Facebook page. It has also created a WhatsApp network, SOS Periodistas MX, to be contacted by those who need its help.

The way in which this association provides help to threatened communicators is guiding them in the formal process of setting a legal precedent for their situation. It gives them information about the State institutions and governmental protection mechanisms from which they can seek help, starting by filing their complaint with the Special Prosecutor for Attention to Crimes Committed against Freedom of Expression (Feadle).

The association is made up of a team of 19 people working for displaced journalists throughout the country, in addition to the collaboration of nearly 200 members nationwide, Garza said. "We are giving up what we have to eat. Right now we are looking for ways to be able to do things," the journalist said.

Jan-Albert Hootsen, Mexico representative for the Committee to Protect Journalists (CPJ), told the Knight Center his organization is providing direct assistance to Periodistas Desplazados Mexico and its members, as well as providing counsel on developing the association.

On behalf of his group, in June of this year, Garza delivered a report in Geneva on the situation of journalists displaced in Mexico to the UN Special Rapporteur on the Human Rights of Internally Displaced Persons, Cecilia Jiménez-Damary.

The Rapporteur, according to Garza, committed to reviewing the situation and to suggest short and long-term recommendations to the Mexican government.

From that meeting, Garza said, representatives of the governments of Austria, Japan and the European Union offered to collaborate. "Austria offered us to clothe (shelter) colleagues and help in projects. The government of Japan also, incredibly, offered support in projects for the protection of journalists. The European Union offered help for projects,” the journalist said.

With the help of the international community, the association soon plans to have its own website, a national information portal and a national network of community radio stations. "We want to start with five radio stations: in Tamaulipas, Guerrero, Morelos, Quintana Roo and in Mexico City."

"The main problem of the journalist at risk, the displaced journalist who tries to rebuild his life, is the economic issue of generating the resources he needs and thus achieve a real repair of his life," Garza concluded