Close to 10 years old, Costa Rican digital outlet CRHoy built a strong audience, betting on a balance between breaking news and impactful investigations, which led to awards and credibility for the outlet.

CRHoy journalist and director Silvia Ulloa told LatAm Journalism Review (LJR) how the site was born, what it has achieved so far and future plans. CRHoy started being planned in October 2011, when she was approached by a banker, Leonel Baruch. He wanted to invest in a completely digital media outlet, something that until then had not existed in the country, the journalist recalled.

The launch was scheduled for January 2012, and Ulloa started running to assemble a team and understand how a digital platform worked – before CRHoy, she had worked in print, television and radio, but not on websites.

“He was concerned about the concentration of power in two or three media outlets in the country and considered that, in addition to being a good business option to have a 100% digital media outlet and innovate in that sense, it was necessary to have a voice different from the traditional ones in the country,” Ulloa said.

Baruch is chairman of the board of directors, but, according to Ulloa, he does not interfere in daily editorial decisions. “There is an editorial committee in which he participates and that is where these things are discussed, but he is not involved in the day-to-day running of the media outlet,” she said. 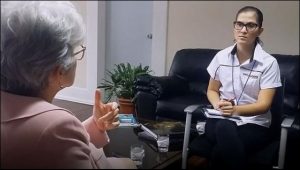 After the launch, one of the novelties implemented by CRHoy was the use of uniforms. “Here the journalists in Costa Rica did not wear a uniform, but it occurred to me to put branding on the journalists' uniforms. So we gave everyone the same shirts, with the logo, on the cars we put huge stickers,” she recalled.

Ulloa, who has a master's degree in business administration, thought from the beginning about how to promote the brand of the new outlet and, according to her, the uniform played an important role in making CRHoy known.

“It helped us to make ourselves visible, our journalists went out into the street with the mission that, for example, if they saw a colleague with a television camera, they would try to stay within the shot that the television cameraman was making, or to put the microphone in a strategic place where it could be seen in the shots and in the photos so that people would question what that was,” Ulloa said.

The idea was to circulate the brand, stimulate curiosity and try to attract the public to seek information about CRHoy and visit the site. “And we started to generate noise, we attended all the press conferences, we attended all the events and little by little we began to generate a critical mass of readers, which was strengthened through social networks,” she said.

The strategy was successful, Ulloa said, and today CRHoy has an audience of 3.29 million unique monthly users, in a country of about five million inhabitants.

The journalist explained that, in Costa Rica, there is no institute or entity that gathers audience data from media and that many do not disclose their numbers, which makes comparisons difficult.

“The only public platform where we can understand how we are is through Alexa [Amazon's virtual assistant]. [...] If one makes a ranking of news sites on Alexa, for example, CRHoy is the most-viewed news site in Costa Rica,” UIloa said.

Currently, CRHoy has a largely female audience (53%) and is concentrated in the youngest age groups – 45 percent of readers are between 25 and 44 years old. At the same time, about 80 percent of them access the site by cell phone.

According to Ulloa, the profile of the public and consumption by cell phone are related to changes that CRHoy implemented and that were new in journalism in Costa Rica. She says the outlet was one of the first media to adapt its content and business model to the digital universe.

At the time they launched CRHoy, she said, traditional media had websites only to republish content that had already appeared in print, radio or television. In other words, the website was considered secondary, and online advertising was distributed as a bonus to companies that advertised in the main media outlet. Ulloa recalled that her fellow journalists said that CRHoy was not going to survive, because the sites did not get any money.

“We had to start by educating the market, so to speak, that web pages had a value, that they cost money and that ads could not be given away,” she said.

To this day, CRHoy's only revenue comes from advertising, because all content is free and open to readers. And the model has guaranteed the outlet’s sustainability for all these years. The exception, Ulloa pointed out, has been the coronavirus crisis.

“The advertising funds with the topic of the pandemic have dropped a bit, I think it is a worldwide phenomenon. And the owner of the media outlet has invested to maintain normal operation, but the pandemic has hit us a lot,” she said.

Another impact of the health crisis was that the 38 employees started to take turns at CRHoy headquarters, in the capital San José: half of the team works from home for 15 days, while the other half works in the newsroom.

In addition to introducing innovations in the advertising market, CRHoy also helped to change the way journalism was done in the country, believes website editor, Jimena Soto. The journalist was one of the first to join the CRHoy team, in November 2011, even before the launch. At the outlet, she spent five years as a politics reporter until she was promoted to editor. 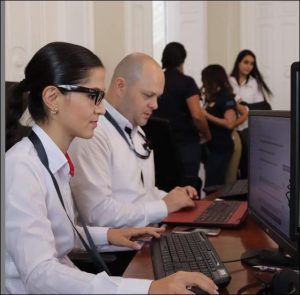 For her, CRHoy brought more agility to local journalism. “CRHoy´s motto was 'what happens when it happens,’ so our objective was, in many ways, immediacy, to go out first. That people were informed first by CRHoy, that they did not have to wait for the news program at noon, the noon radio edition, or the next day's newspaper, that people were informed at the time. [...] Then other media began to see that this was a determining factor of our work and began, so to speak, to copy it,” Soto told LJR.

The journalist said that, in a press conference, it was common for traditional media to keep the news to publish on television, radio or in print, while CRHoy covered it almost simultaneously. And, seeing the success in terms of audience for the new site, the competitors started to follow the same path.

Soto believes that, in addition to immediacy, the variety of CRHoy's news coverage is one of the factors responsible for its good audience. “We have tried to cover all audiences, we publish content on economics, politics, entertainment, sports, technology, we try to ensure that all interests are covered,” she said.

Even though breaking news is part of CRHoy's identity, Ulloa pointed out that the outlet seeks to alternate this type of content with more in-depth investigative reporting. "We try to have a balance, because the public is very varied,” she said.

And some of these investigative reports were responsible for bringing credibility and recognition to the media outlet. One of them became known as the case of UPAD, the Presidential Data Analysis Unit, in English.

“Last year we denounced the creation of a presidential data unit that sought to have access to private data of citizens and that generated the first raid in history that has been made of the presidential house of Costa Rica. And a criminal investigation against the President of the Republic,” Ulloa said.

A few years earlier, CRHoy received the 2017 National Journalism Award Pío Víquez, for an investigation that became known as "El Cementazo," which denounced irregularities in cement imports from China.

Even though it is a young outlet, the director said that CRHoy managed to guide the public debate and achieve important changes in the decisions of authorities.

“We realize that many times we set the country's news agenda because the issues that we publish later are replicated by other media, they go after it and that for us is very satisfactory,” she said.

CRHoy's editorial line is described by Ulloa and Soto as combative in relation to public authorities. “It is an independent, inclusive line that seeks to support small and medium-sized businesses and strengthen private companies, and above all it is a combative editorial line, which, for example, if you feel that there is something that should be reported [...] it is reported, it does not matter if the President of the Republic calls to complain with the owner, the owner tells him: 'I have nothing to do with that, talk to Silvia,’” Ulloa said.

As a next step, after completing ten years, Ulloa plans to invest more in innovation, infographics and audiovisual products, as soon as the coronavirus crisis improves and the economy recovers.

“The scenario of the pandemic changes everything for us, but I would like the possibility of growing next year at the level of journalistic payroll and audiovisual team in order to expand the offering of products and the offering of quality reports.”