In a new assault on the Nicaraguan press, the government of Daniel Ortega raided the editorial offices of magazine Confidencial, founded by journalist Carlos Fernando Chamorro, for a second time. It also arrested international journalists covering the incident.

According to Confidencial, around 9 a.m. on May 20, police surrounded one of the towers of the Invercasa corporate center where the recording studio for the programs Esta Semana and Esta Noche, directed by Chamorro, were temporarily housed. 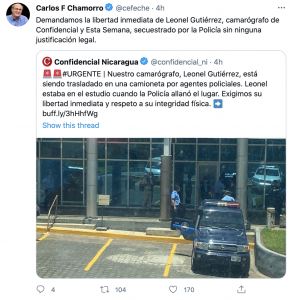 According to what Chamorro said during a radio program, media photographer Leonel Gutiérrez, who was at the scene during the raid, was missing for several hours.

“We want to see Leonel Gutiérrez, we want him to regain his freedom if he is detained. At this moment he is being held, abducted by the police because we have not been able to have contact with him. We want the goods that have been taken returned to us,” Chamorro said at the time.

Some images shared by the outlet show policemen taking out boxes, computers, and television recording and editing cameras. At that time, it was also possible to see the photographer Gutiérrez who was mounted to a truck of the Directorate of Judicial Aid (DAJ, for its acronym in Spanish), but it is not clear why he was detained, Confidencial reported.

Luis Almagro, secretary general of the Organization of American States (OAS), demanded respect for the workers of Confidencial.

“We demand that the life and physical integrity of the workers of @confidencial_ni are respected and the harassment stops,” he wrote via Twitter. “Respect for freedom of expression as an essential element of democracy makes this type of attack reprehensible.”

Additionally, police temporarily detained a French photographer from news agency AFP who was covering the raid, as reported by the AP. Nicaraguan journalist Wilfredo Miranda reported on Twitter that police detained international colleagues from the EFE agency and that he managed to escape. "’They are going to prison, they are going to prison,’ said a plainclothes policeman. The reason is that we are documenting the new assault on Confidencial," he wrote.

Confidencial is one of the few non-official media outlets that remains in Nicaragua and that is why it has been persecuted. On Dec. 13, 2018, its headquarters were raided by the police without a court order. Although Chamorro tried for years to have the headquarters returned, he never succeeded. On Feb. 23, 2021, Ortega handed over the building headquarters to the Ministry of Health to establish a home for expectant mothers.

“We want to reiterate that the soul of our media outlet is not in our confiscated building, nor is it in this place, which has been assaulted today by the police in a useless act,” Chamorro wrote in a letter to colleagues. “You will never be able to confiscate journalism, because you will never be able to shut up this media outlet. Here we are doing journalism, reporting.”

"This is further proof that the Ortega-Murillo dictatorship's repression, persecution and harassment of the independent media has not stopped, on the contrary, it continues to deepen," Confidencial political cartoonist Pedro X. Molina told LatAm Journalism Review (LJR). "This reminds us harshly that nothing is normal in Nicaragua, that the role of the independent media continues to be vital and, as the dictatorship knows, it is cruel against them." 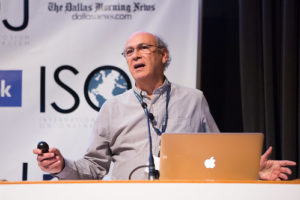 “As a collaborator of Confidencial, as a member of independent journalism and as a citizen I feel once again my fundamental rights have been attacked and all of us Nicas should feel the same way,” Molina said. “After all, freedom of the press, expression, assembly and mobilization are not rights that belong only to journalists, but to the entire population and therefore it is up to all of us to reject this type of cowardly act, in addition to not giving up in the fight for our rights, for freedom, for justice and democracy that our country urges.”

Also this May 20, journalist and sister of Carlos Fernando, Cristiana María Chamorro Barrios, former director of the Violeta Chamorro Foundation – an NGO that promoted press freedom and independent journalism in the country –, was subpoenaed by the Ministry of the Interior (Migob) and accused of alleged "evidence of money laundering."

After three hours at Migob, prohibited from bringing her lawyer, she said she was asked to provide accounting reports for the foundation within 24 hours, as newspaper La Prensa reported. The former director said it was impossible due to the time constraints.

On Feb. 5, 2021, the Violeta Chamorro Foundation announced it was ceasing operations  because it would not submit itself to the Foreign Agents Law that was approved by the Assembly in October 2020. The purpose of the law is to control external resources received by people and civil organizations from international sources.

The recent subpoena for Cristiana Chamorro is made using the Foreign Agents Act. The journalist is a potential candidate for the presidency of Nicaragua.

These events takes place one day after the country's Supreme Electoral Council (CSE) notified the cancellation of the legal status of the Democratic Restoration Party, which is part of the National Coalition, as reported by DW. The Coalition is the main opposition bloc to Ortega that seeks to defeat him in the elections next November.

Regarding the accusations against Cristiana Chamorro, Nicaraguan journalist María Lilly Delgado emphasized it was important to remember that Carlos Fernando Chamorro and the nonprofit CINCO, which he ran, were previously accused of money laundering ahead of municipal elections in 2008.  Those charges were ultimately dropped.

"Journalists and the independent press work under harassment, bullying and attacks under Daniel Ortega's regime in this election year, where Ortega controls the electoral magistrates, the rest of the powers of the state and makes an election tailored to himself, without allowing scrutiny and international observation," Delgado told LJR.

*Teresa Mioli assisted with this report.