A wave of violence that broke out on Thurs., Aug. 11, across several parts of the northern Mexican border city of Ciudad Juarez resulted in the deaths of four workers at a local radio station.

Allan González, an announcer at the youth radio station Switch 105.9 FM, which belongs to the MegaRadio group, was doing remote control promotions from outside a pizzeria when an armed group burst into the business and shot at the customers who were there, then went to the station's mobile unit and shot González and three of his colleagues, according to El Universal newspaper.

The other members of the Switch 105.9 FM team who lost their lives were identified as Armando Guerrero, head of marketing at the station; Lino Flores, technical operator; and Alejandro Arriaga, from the security team, the radio group announced hours later. 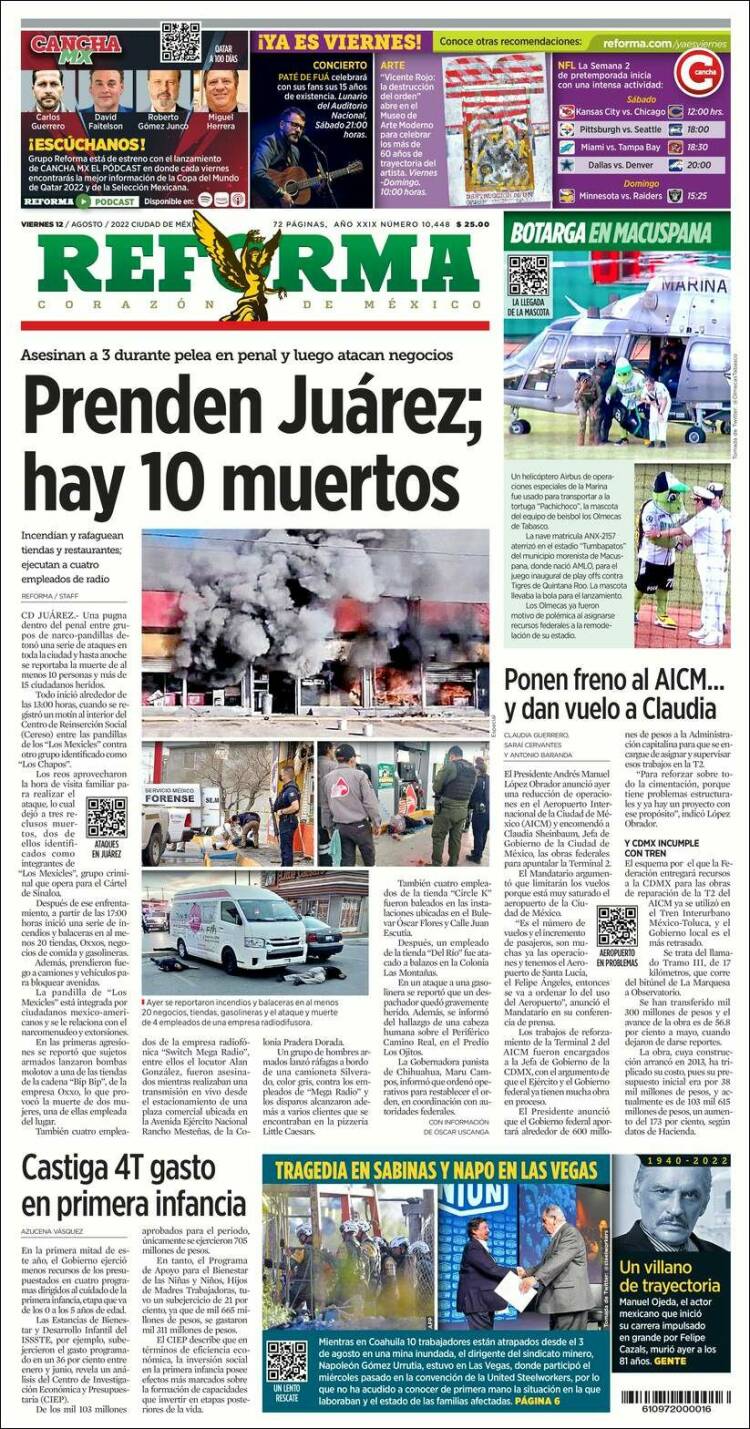 Front pages of national media outlets published the acts of violence in which the employees of the radio station Switch 105.9 FM lost their lives (Photo: REFORMA newspaper).

The attack against the journalists was part of a series of attacks resulting from a fight between two rival organized crime groups in a prison in Ciudad Juarez, said Ricardo Mejia Berdeja, Undersecretary of Security and Citizen Protection of the Federal Government, during the morning conference of President Andres Manuel Lopez Obrador in Mexico City the following morning.

The violence jumped from the prison to the streets of the city in the form of riots, arson attacks on businesses and shootings, one of which hit the radio station workers, the official added.

President López Obrador said that the fatal attacks on the journalists and five other citizens who also lost their lives were a form of "retaliation" after authorities took control of the prison where the brawl originated.

Although initial versions indicated that the attacks on the Switch 105.9 FM team had been aggressions against the general population, members of the press in Ciudad Juarez alerted colleagues about alleged threats directed at reporters who were covering the violent events, according to messages posted on Twitter and Facebook, as well as in WhatsApp groups of Juarez’s journalists.

For its part, Mexico's National Chamber of the Radio and Television Industry (CIRT, by its Spanish acronym) said the attacks were related to the victims' journalism activity.

"We clearly observe that they were attacked for their professional work and as part of the strategy of organized crime to sow panic among the population," Jose Antonio Garcia Herrera, president of the Board of Directors of CIRT, said in a statement. "CIRT maintains that the murders, disappearances and violence against journalists and media workers represent the most extreme censorship that affects press freedom."

The undersecretary of federal security said that the Mechanism for the Protection of Journalists and Human Rights Defenders had been activated to take relevant action in view of the death of the four journalists.

The organization Artículo 19 reported that it is documenting the incidents that happened to the MegaRadio team and called on the Chihuahua state government to guarantee the right to information for citizens and freedom of the press.

"Faced with today's violence in Ciudad Juarez, Chihuahua, ARTICLE 19 demands that authorities at all three levels guarantee the integrity of journalists who, in high-risk coverage, inform the public about these events," the organization said on Twitter.

Following the murder of four MegaRadio employees and the violence against civilians and businesses in Ciudad Juarez, the radio group's news stations, which are heard in both Juarez and El Paso, Texas, suspended their programming on Thursday night and Friday.

Radio announcer Allan Gonzalez, one of the deceased, was broadcasting live from a pizza restaurant at the time of the attacks (Photo: Switch 105.9 FM Facebook).

The media group had planned to make a special broadcast to honor the loss of their murdered teammates. However, at the last minute, they received orders that, for the safety of the station's workers, transmissions would be suspended until further notice.

"When we were about to figure out the order of the news items and how we were going to present them, I received a call from management in which they asked us, to take care of our physical integrity and our lives, above that which we are so passionate about, which is communicating ideas. They said 'tomorrow there will be no transmission'," a representative of MegaRadio said in a press conference on Friday.

José Loya, MegaRadio's director and news anchor, said the decision to shut down the microphones was also a way of protesting against the violent incidents, as well as a way of showing solidarity with the families of their deceased workers. Loya said the radio group condemned the murders and called for justice for them as well as the deaths of the other five citizens of Juarez.

"We will protest as necessary for justice to be done. We stand in solidarity with all those who in some way have been hit by groups that want social destabilization. As a media company, we will continue to give voice to citizens in their just demand against impunity," Loya said. “Yesterday, not one, but four of our company's voices were silenced. But we will never remain silent in the face of impunity.”

Until Friday, the group's stations remained on the air, although without the participation of the radio hosts.

Thursday's murders in Ciudad Juarez are the second case of murders of media workers in Mexico in the month of August. Between the evening of Tuesday, August 2 and the first hours of Wednesday, August 3, journalist Ernesto Méndez Pérez, director of the news outlet Periodico Tu Voz, in the state of Guanajuato, was shot dead. 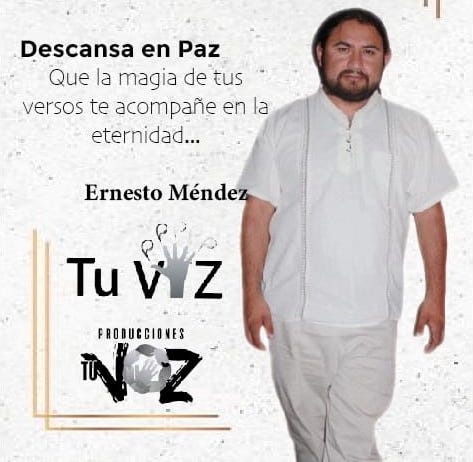 Journalist Ernesto Méndez died outside a liquor store owned by his family in the state of Guanajuato. (Photo: Facebook of Tu Voz Newspaper)

The incident occurred outside a liquor store owned by the journalist's family in the municipality of San Luis de la Paz, in the north of the state, where an armed group burst in and killed Méndez and two other people.

The organization Artículo 19 said the journalist had previously received threats and urged the Special Prosecutor's Office for Attention to Crimes against Freedom of Expression (FEADLE, by its Spanish acronym) to act on the matter.

Mexico's Undersecretary of Security, Ricardo Mejia Berdeja, reported on Thur., Aug. 11, that, according to the Guanajuato state Attorney General's Office, Mendez's murder was due to extortion related to his family's business.

On the same day, the Guanajuato Attorney General's Office reported that a 22-year-old man named Roberto "N" had been arrested the previous Saturday as the alleged perpetrator of the murder of Mendez and two other victims.

Up to then, with the murder of Méndez, 13 journalists had now been violently killed in Mexico so far in 2022.