The COVID-19 pandemic gave rise to new excuses to exercise violence against journalists and restrict freedom of expression in several Latin American countries during 2020.

This is according to “The Global Expression Report” from international organization Article 19, which year after year offers a detailed monitoring of the situation of freedom of expression around the world.

Several Latin American leaders silenced information about the pandemic and exacerbated the deep problems of disinformation that already existed in the region, according to the report, which was published in late July 2021.

Furthermore, violence against journalists and activists in the region has progressed alongside their stigmatization, which has become common throughout the continent. Article 19 emphasized the situations in Brazil and Mexico regarding their levels of restrictions on freedom of expression due to violence and disinformation in the context of the pandemic.

Regarding the South American country, the report highlighted the responsibility of President Jair Bolsonaro in aggravating the dissemination of denial and false narratives about the coronavirus and highly polarizing speeches, which it said caused an information crisis and an increase in the rate of infections. 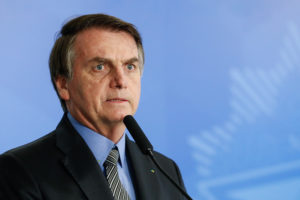 The Bolsonaro government has repeatedly tried to prevent information and figures on COVID-19 cases from coming to light, according to the report, which also added that during 2020 the Brazilian president issued 1,682 false or misleading statements (an average of 4.3 per day).

The Bolsonaro administration also carried out direct attacks on the press in the context of the pandemic: the president threatened to hit a journalist in the face and his health minister described the media as "sordid" and "toxic" and urged Brazilians to turn off their televisions, it highlighted.

Overall, Article 19 recorded 254 attacks on journalists and communicators in 2020 in Brazil, of which 123 were perpetrated by public officials, while 46 were acts of racism, sexism or bias against the LGBT+ community. There were 20 cases of serious assaults (murders, attempted murders, and death threats). Threats against female, Afro-Brazilian and LGBT+ communicators increased, as did attacks against media that cover human and environmental rights.

In the case of Mexico, the report noted that from March to December 2020 there were 113 attacks related to journalistic coverage of the pandemic, 64 percent of them perpetrated by public servants.

In addition, 69 Mexican journalists died from the coronavirus and the vast majority of reporters did not receive adequate protective equipment to carry out their reporting, the document said.

As in Brazil, in Mexico, disinformation was out of control and largely driven by the president, according to Article 19. The Mexican fact-checking organization Verificado found that almost four out of every 10 statements by Andrés Manuel López Obrador were false or misleading in 2020. In addition, four out of 10 requests for information about COVID-19 in that country were denied.

On the subject of violence, the document indicated that six journalists were killed in 2020 in Mexico, while 24 remain missing. Article 19 registered 692 attacks against communicators and the media, which represents an increase of 13.62 percent over the previous year,

Attacks on the press by the State reached 343 in 2020, 78 more than the previous year. Public servants perpetrated 188 of these attacks, among which the most common are the illegitimate use of power (judicial harassment and stigmatization), intimidation and harassment, and blocking or alteration of content.

The report highlighted that the impunity rate for crimes against freedom of expression in Mexico reached 98 percent in 2020. The Office of the Special Prosecutor for Crimes committed against Freedom of Expression (FEADLE, for its acronym in Spanish) tends to obtain sentences for the perpetrators of crimes against communicators, but not for the intellectual authors. Likewise, the Mechanism for the Protection of Journalists and Human Rights Defenders has been significantly weakened and two communicators under this system were assassinated in 2020.

“The murder of journalists constitutes the most extreme form of censorship, and impunity contributes to the self-censorship of the press. The authorities themselves are responsible for the largest number of direct attacks against journalists and the media: 46% of intimidations and harassment, and 36% of threats,” the report said.

Other governments on the continent also found new opportunities in the pandemic to attack journalists and restrict the free flow of information.

In Guatemala, the work of the press was hampered with an expeditious declaration of a "state of siege" and journalists covering the pandemic were accused of "attempting to destabilize the country." Even Guatemalan President Alejandro Giammattei sprayed disinfectant on media representatives during a press conference and said he would like to "quarantine them."

In Cuba, the new crime of "propagation of the pandemic" was decreed, which was used to prevent the presence of journalists in some places, while in Nicaragua, Vice President Rosario Murillo called the media "diabolic" for allegedly spreading false information about the coronavirus.

In addition to Bolsonaro and López Obrador, other populist leaders of the continent addressed the issue of COVID-19 from an anti-scientific and denialist perspective, such as Nicolás Maduro, from Venezuela, who promoted remedies whose effectiveness has not been scientifically proven, and his counterpart from Nicaragua, Daniel Ortega, who downplayed the severity of the virus.

“This is strategic: by deepening suspicion and polarisation, many autocrats strengthen their base,” the report said.

Other phenomena that contributed to opacity around the pandemic during 2020 in Latin America were the concealment or manipulation of mortality figures and the suspension of access to information processes in some countries.

“The Americas are plagued by populist autocrats, many of whom poisoned the information environment through denialism and disinformation around the pandemic,” the report said.

Freedom of expression in a tailspin 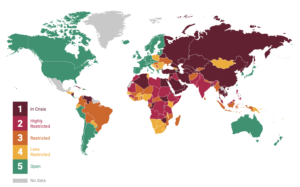 The scale used by the organization ranges from 0 to 100 and takes into account 25 indicators to measure how free people in 162 countries are to write, post online, speak out, access information and knowledge, share them freely, and hold those in power accountable.

“Persistent patterns of violence against press and HRDs [human rights defenders] are concentrated in Mexico, Honduras (GxR score: 65), Colombia (GxR score: 52), and Venezuela (GxR score: 9): these worsened amid a security-heavy approach to management of both the pandemic and social protests,” the report said.

The Latin American countries with the best score on the scale, according to the report, are Uruguay with 92 points, Costa Rica with 89, Argentina with 88, the Dominican Republic with 87 and Jamaica with 86. The country in the region that advanced the most on the scale in the last decade was Ecuador, which climbed 19 positions, followed by the Dominican Republic, which climbed 11.

“Populist leaders and those who seek to entrench their own power hate accountability, which is why we have seen attacks on journalists and online censorship intensify in many countries,” the report said.