Paraguayan media outlet El Surti emerged five years ago with distinctive and innovative illustrations and reporting that would tell the stories of the Americas, from climate change to drug consumption to COVID. 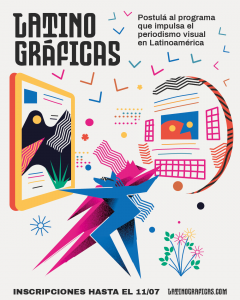 “From El Surti's 5 years of experience, we have identified that visual narrative is a very powerful way to mitigate the infodemic, enhance the impact of journalistic work and deepen interaction with new audiences and community management,” Alejandro Valdez Sanabria, El Surtidor co-founder and director, told LatAm Journalism Review (LJR). “These are all factors that directly affect the sustainability of a media outlet, one of the great challenges that independent media face in this era of the attention economy and capitalism of platforms.”

With this knowledge and a desire to create a space for “innovation and excellence in visual journalism through collaboration,” the media outlet has launched the second edition of the Latinográficas program.

As part of the initiative, nine designers, illustrators or journalists will be chosen to participate and create visuals for reports on the pandemic. Each recipient will be linked with a publication, including Aos Fatos (Brazil), Salud con Lupa (Peru) and Distintas Latitudes. Global Voices will translate some of the publications.

The recipients will also receive 11 visual production training sessions with the team at Paraguay’s El Surti, clinics and keynote talks with specialists in new narratives and other visual mediums, access to the Latinográficas online community, and a scholarship of US $1,000.

Among the keynote speakers are Eliezer Budasoff, editor of special projects at El País América; Sara Hebe, Argentine singer and composer; and Eleri Harris, U.S. cartoonist, journalist and writer for The Nib; and others.

Applications opened on June 28 and will close on July 11. A question and answer session to learn more about the program will be held on July 8.

El Surti’s team identified a need and opportunity to grow graphic journalism in the region through its participation in the Velocidad accelerator program and work with strategic and tactical consultants, Valdez said. It was one of ten startups selected to receive direct investment and consultation through the program, and one of the six to advance to the second phase of the program.

“The project was born from the role El Surti was fulfilling in the different networks and transnational collaboration projects in which we participate, where in addition to doing the usual journalistic work, we also contribute graphic pieces for the dissemination of these great reports,” Valdez said. “This helped us understand the added value of the type of journalism we do, and that this skill was also highly required in the independent media newsrooms in the region, which we were able to verify through various requests from directors and founders of those media that routinely consulted us on how to develop more visual journalism on their own.”

During the first edition of the Latinográficas program in 2020, seven recipients worked on pieces to combat disinformation and address COVID-19 related challenges.

Additionally, Valdez said more than 500 colleagues from more than 250 cities in Latin America, the U.S. and Spain participated in workshops, webinars and talks that were part of the initiative.

“They worked with three journalistic networks and more than 100 visual pieces were produced that reached almost a million young people on social networks,” Valdez said. “Beyond those numbers, I also tell you that the participating fellows managed to incorporate the methodologies and formats worked on in the program in those media where they collaborate, such as the case of Mutante (from Colombia) and NoFicción (from Guatemala).”

Valdez said the goal is to form collaborative networks to promote graphic journalism in the region in the coming years.