This article is part of LJR’s occasional series on Digital Natives, news organizations or journalists who have been innovating Latin American journalism on the internet.

Political coverage in Brasilia is the most sought after in Brazil. The Federal District has the largest concentration of journalists per capita in the country, and is home to the headquarters, bureaus and correspondents of the most important newsrooms in the country. Venturing into this market that is saturated with journalists and media outlets is for the brave few. Thriving in it, especially by doing critical and independent journalism, is a Herculean task.

In 16 years, this is exactly what Congresso em Foco has achieved. The website was created in 2004 to cover the House of Representatives, the Senate and its 593 parliamentarians: 513 representatives and 81 senators. Today, it is a reference in coverage of Brasília, uniting audience, prestige and financial sustainability. 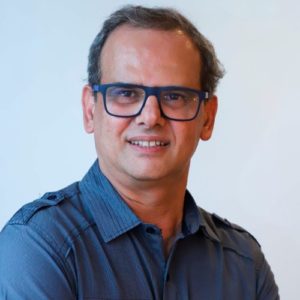 Sylvio Costa, Congresso em Foco founder: "It is not the size of your newsroom that determines your relevance but by your ability to meet the public's information needs." Photo: courtesy

Founder Sylvio Costa already had more than 20 years of experience in traditional newsrooms, including at Folha de S. Paulo, Istoé and Correio Braziliense, when he decided to launch the website. At that time, he owned a content production agency for websites and publications. That was when he started producing, at the request of a client, a newsletter covering what goes on behind the scenes of the nation’s capital politics.

“I realized that I had space to do something about Congress, about politics, which was not being done. There was a lack of a more individualized view of the Legislative, for the ideas of the Congress, the diversity inside, the conflicts of interests, the particularities. How each one voted, how much they spent, how they positioned themselves, their attendance,” Costa told the LatAm Journalism Review.

But how to organize such wide coverage with a small team and investment? The editorial strategy of Congresso em Foco to stand out amidst the avalanche of information in Brasília was to define its priorities and be very clear about the cost-benefit of each investigation.

“If I have a story that is great but I need three weeks to investigate, fine. It is not ruled out, but we try to also run a story that could be published today within that three-week investigation. What can you do today that can generate relevance, interest and generate an audience?” Costa asked.

This need becomes even more evident in the face of the new competitors that Congresso em Foco has conquered over the years. In addition to traditional media, new digital natives have emerged to fill coverage gaps in Brasília. It is the case of JOTA, Poder360, Metrópoles, Vórtex, Antagonista and Agência Infra.

Since its launch, Congresso em Foco has landed scoops and garnered awards, such as the prestigious Embratel, Vladimir Herzog and Esso. The latter, won in 2009 as "Best Contribution to the Press," is an honorary category that highlights good initiatives in journalism.

The site’s prominence was built with a series of scoops on parliamentary activity in Brasilia. In the first few months of its life, the site published an article with the list of parliamentarians who were the defendants in a lawsuit in the Supreme Federal Court, at the time when the subject was still little discussed. The series prompted reporting from much of the press and attracted a lot of readers to the site.

Researcher Francilaine Moraes, who has a PhD in communication from the University of Brasília, analyzed the case of Congresso em Foco in the study, “Journalism and Democracy: the role of the mediator.” Moraes said that the outlet has a staff knowledgeable in politics that has turned into a demanding news source that is also directed at the parliamentarian públic and its advisers, specialized journalists, lobbyist.

“It is not easy for a media group to enter and establish themselves in this elite circle, which is located in that micro arena of public space. To become a credible source of information is a success, even more so because [their coverage] is deep and they always have the correct information,” said Moraes to LatAm Journalism Review.

The site was notable for reports based on data on the functioning of Congress and parliamentary activity that are often reproduced in larger outlets. Critical and independent journalism, however, took its toll in 2011, when a report showed a group of Senate public servants received more than the constitutional salary cap for civil servants.

“Today you access a government website and can find a civil servant's salary, but at that time it didn't exist. This is before the Access to Information Law,” Costa recalled of the moment that he classifies as the worst experienced by him, until that moment, as head of Congresso em Foco. “This generated an avalanche of 50 lawsuits filed by Senate officials. It even impaired the functioning of the site, because there were several hearings on the same day.”

The site was acquitted in all cases, but the appeal of one of them is still pending before the Federal Supreme Court.

Good journalism also bears fruit, which comes in the form of an audience and prestige, contributing to the financial health of the publication. In 16 years of existence, Congresso em Foco has experimented and continues to experiment with various business models and products. It even produced a bi-monthly print magazine that, to the founder's surprise, was the outlet’s main source of revenue for some time:

“The ace in the hole [in advertising sales], interestingly enough, was print. We even printed 50,000 copies of the magazine [Congresso em Foco], and launched up to six issues a year,” he said.

The publication contained exclusive content and served to attract advertisers to the site. It was discontinued when it was no longer worthwhile to have the magazine printed and with the increase in advertising revenue on the website itself.

“We are in a phase of increasing content subscription. So then we have several products, some experimental, others have already taken to a certain maturity,” Costa said.

One of these products is Farol Político, a weekly newsletter on the political scene, exclusively for subscribers. The team has also worked in the area of research since 2017, with Painel do Poder (Panel of Power) being their main product sold as a report to customers.

More recently, the site launched Radar do Congresso (Congress Radar), which is an interactive tool developed with funds from Google to monitor parliamentarian activity.

“We take advantage of the Brazilian Congress tradition of working with open data, favoring transparency. This project is being funded by a grant that we won from Google. It is a milestone in our Congress coverage model,” João Frey, editor-in-chief of Congresso em Foco, told LJR. "It will be possible to see all the speeches, expenses and cross information to analyze the behavior of the parliamentarians in several votes."

In addition to products and advertising, another source of revenue is the already traditional Congress on Focus Award, which has chosen the parliamentarians who stand out the most in a series of categories since 2006. There are popular votes, from journalists and also from a committee. The event is one of the most visible moments of the year, since the awards tend to have repercussions on other outlets.

“[The creation of the award] was a survival strategy, because when we started doing reporting that was a little more investigative there inside Congress, showing criminal accusations against politicians, scandalous spending, this generated a very negative reaction from some readers [against the Congress],” Costa said.

Thus, the creation of the award was an effort to showcase good initiatives within parliament and to include a positive discussion about parliamentary performance. "We wanted to make it clear that our critical [reports] are to improve the Congress, not to ask to close it," Costa said, referring to movements supporting President Jair Bolsonaro that defend unconstitutional measures.

“Covering the negative aspects of any subject is a part of journalism, but to listen to the reader and contribute something positive is very good, because people think that in this political environment the majority of the things are negative. It is important to have the award, that the people vote and see the results together. This format of hearing the reader, understanding and taking their opinions in this way is something rich and is in the DNA of Congresso em Foco,” said Moraes.

The team at Congresso em Foco has been working remotely since March 12, a few days before Congress itself suspended its sessions due to the COVID-19 pandemic. The realization of online sessions, implemented in March, changed the team's routine.

"Pandemic is the topic of the moment and we had doubts about how, and if we would do this coverage, but it was a wave that did not stop growing and imposed itself as the agenda of the moment," Frey explained. “Tuesdays and Wednesdays have always been the toughest days for congressional coverage. Now, with online sessions, any day can have a session.”

With coverage of the pandemic, the site celebrated a record number of hits: 8 million unique users between March and April, a number four times higher than the same period last year. Another recent reason for celebration was the expansion of the team from 12 to 13 members. A modest, but significant, growth.