Covering about 3 million square miles, the Amazon rainforest is the world’s largest. However, more than 289,000 square miles have been destroyed since 1978.

A new fellowship program aims to recruit investigative journalists in South America to cover this vast area and one of the biggest stories of our lifetime: the destruction of the world’s rainforests. 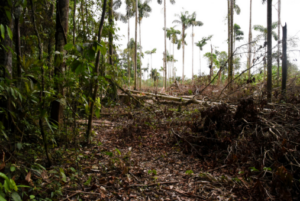 “Few stories are more urgent –and global– than the destruction of the planet’s tropical rainforests. The Pulitzer Center’s RIN [Rainforest Investigations Network] seeks to create an ecosystem of collaboration among journalists to follow the money and the many illegal practices and legal loopholes that enable industrial-scale deforestation,” the organization wrote.

Three fellows from the Amazon region will join journalists from the Congo Basin and Southeast Asia as part of the inaugural cohort of the Pulitzer Center’s Rainforest Investigations Fellowships.

“The goal is to allow a group of journalists to do very high-quality work and with a lot of impact (...) and to reveal issues that may affect each country's environmental and economic policies,” Gustavo Faleiros, principal editor of the RIN, told LatAm Journalism Review (LJR).

Selected journalists will work on both individual and collaborative reporting projects that look at climate change, corruption and governance in the rainforests. The fellowships will last one year and cover the reporter’s salary and provide additional support for the home or hosting newsroom.

The fellows will also work with a data and technology coordinator for investigations, and the education team from the Pulitzer Center in order to share their stories at schools and universities.

"The Amazon has become a very constant topic of coverage [in the world press], since the last year specifically and has become very central, so much so that it has become the subject of the American election, the Mercosur agreement and the European Union," Faleiros said. “But there is a lack of articulation, resources and even infrastructure so that journalists can create more complex narratives. What are the supply chains? How is the world economy linked to the pace of transformation of tropical forests?”

Applications are due by Dec. 20, 2020 at 11:59 PM EST. Among other information, those interested must submit a proposal for an “investigative project describing the most ambitious report on the tropical forest they intend to carry out.” Find more information and apply here.

"There is a need to do reports that show the urban problems in the Amazon, nutrition problems, public health problems," Faleiros said. “There is a mystification [in the coverage] of the social issues of the indigenous people, which are interesting and generate global reports, but there are other issues that are left behind and that need to be better covered.”