An independent report found that news shows offered on U.S. government-funded Radio Televisión Martí, which produces news for and about Cuba, were “peppered with bad journalism” as well as being “ineffective propaganda.” 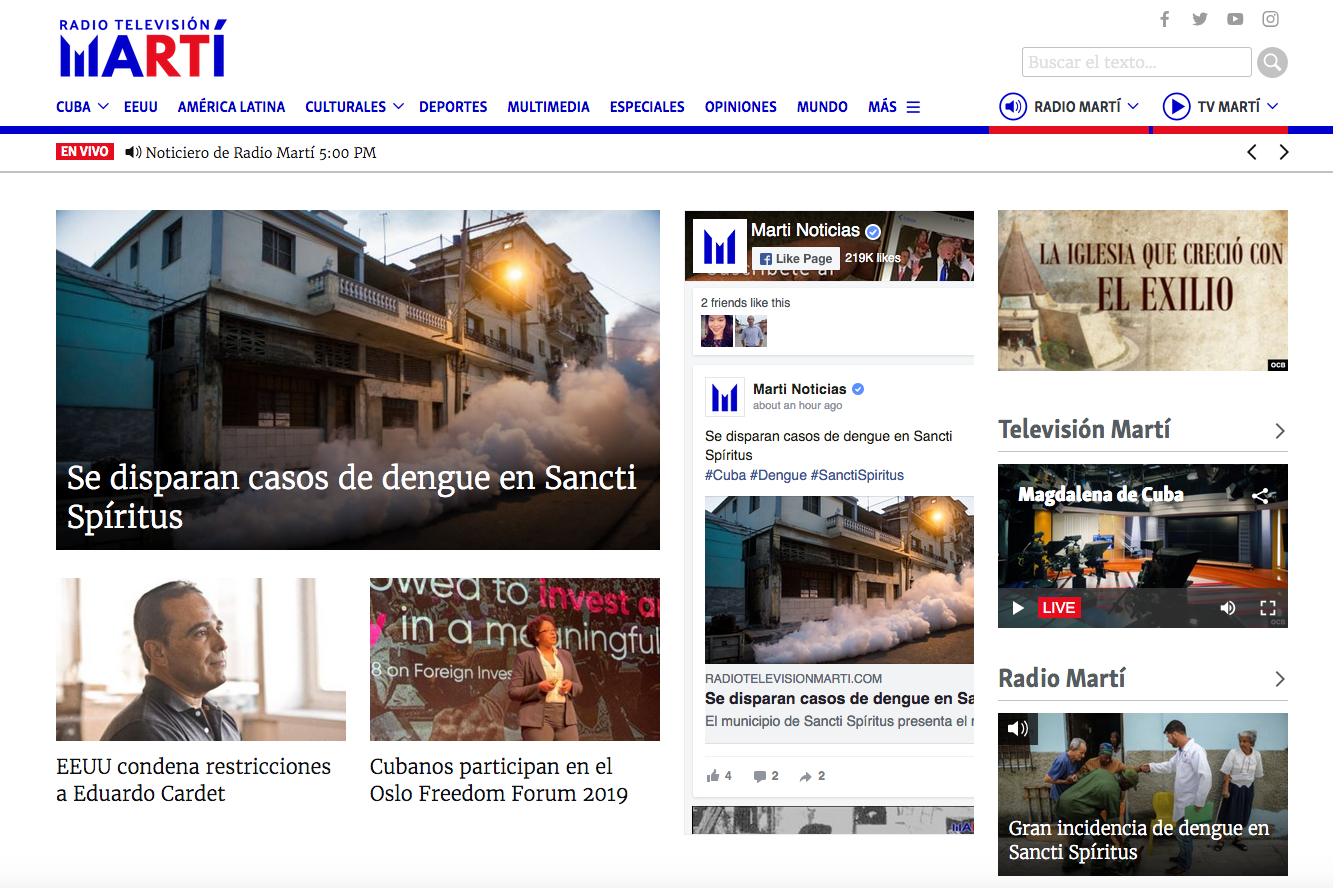 Experts found that the content of Radio Televisión Martí, overseen by the Office of Cuba Broadcasting (OCB), “falls far short” of its ethical standards and mission “to serve as a trusted and authoritative source of accurate, balanced and complete information for the Cuban people.”

On May 21, the U.S. Agency for Global Media (USAGM), an independent federal agency that oversees the OCB, released the report based on an expert panel’s review of OCB content.

USAGM CEO and Director John F. Lansing ordered the review in October 2018 because of a video segment broadcast in May of that year on Radio Televisión Martí that included anti-Semitic remarks about philanthropist George Soros.

According to the Miami Herald, the segment “raises conspiracy theories about Soros, who is identified as a ‘billionaire of Hungarian-Jewish origin’ and a ‘Jew of flexible morals.’”

The newspaper added that the report gained attention in October after a blog highlighted it following bomb threats against Soros.

That month, Lansing released a statement saying that the segment was “inconsistent with our professional standards and ethics. USAGM networks’ content is required to adhere to the highest standards of professional journalism.”

He also said he ordered the audit of OCB content and additional training for its journalists.

Eight federal employees and contractors of Radio Televisión Martí were dismissed in the aftermath, according to Tomás Regalado, OCB’s director since June 2018.

As part of the recently released report, five experts evaluated a random sample of news and opinion content from OCB that was released between March 1 and Nov. 30, 2018. While the panel unanimously said the sports, arts and light content, as well as the online news wrap-ups, were fine, it found problems with the radio and television news shows.

Regarding production quality of Martí radio and television, the experts said it was “mediocre.”

Looking at balance and fairness, the experts found that opposing viewpoints were frequently left out and hosts and journalists provided opinion and editorialized without the content being clearly presented as such.

Moreover, “Almost any criticism of the Cuban government and its leaders appears to be allowed on Martí, on radio, TV and online, day in and day out, in news commentary and shows and online reports throughout the day,” according to the expert assessment.

The panel called for sources with differing points of views and more attribution of content. It also found a lack of context for explaining events of the early Cuban revolution or contemporary issues, especially outside of the anti-Castro lens.

As positives, the panel said it found “few factual errors” in straight news stories and “almost no use of anonymous sources.”

The panels looked at two long-standing questions affecting the USAGM, one concerning
“whether it should produce propaganda,” and the second, whether it and its media “should be a direct instrument controlled by the secretary of state to carry out each given administration’s foreign policy.” As it noted, administrations and Congress since at least President Dwight Eisenhower (1953-1961) have decided not to pursue either.

“They charged the agency instead to reflect American ideals of a free, objective and fair press, and in that way seek to influence foreign populations by demonstrating how a democracy works, warts and all,” the review stated. 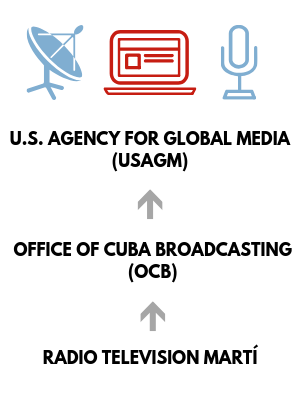 Despite acknowledging that there is “inherent tension” in USAGM’s mission since it’s part of the federal government, the experts found a difference in much of Martí’s content when compared to USAGM’s other news services.

“Martí openly engages in both propaganda and the promotion of a current administration’s foreign policy, in this case towards Cuba (as well as Venezuela and Nicaragua),” it said.

Regalado, OCB’s director, said the panel's assessment is “incorrect” when taking into account Martí’s current coverage and that it “paints only one picture.”

Without judging whether it was correct to engage in what it determined to be propaganda and the promotion of a single foreign policy, the panel found that attempts to carry out that strategy to influence a regime change in Cuba were “misguided” and “almost sure to fail.”

Later, the reviewers explained that today’s Cuba “seems ripe for change,” but that “Martí’s content is fundamentally ill-suited to promote a switch to democracy.” To back up the claims, they said Martí’s content does not address the current Cuban reality and that its one-sided talk shows lack the ability to change opinions. And by simply attacking, they do not promote democracy.

The expert panel chairman was Edward Schumacher-Matos, director of the Edward R. Murrow Center for a Digital World at Tuft University’s Fletcher School of Law and Diplomacy. Other panel members included Andrea Sarralde, a contributor and former reporter for Telemundo; Laura Castañeda, professor of practice at the Annenberg School of Communication and Journalism at the University of Southern California; Maria Fernanda Sandoval, a marketing and social media expert; and Roberto Suro, founder and former director of the Pew Hispanic Center.

Radio Martí was created in 1985 and TV Martí followed in 1990. Based in Miami, Florida, the Radio Televisión Martí gets information from the island through phone, email, social media and a human rights hotline. As Regalado explained to the Knight Center, after people call in human rights violations, they attempt to confirm the information and then send it to Freedom House in Washington, D.C.

The Cuban government jams the TV signal on the island and a plane that used to carry the signal as it flew over the island was discontinued in 2014, according to The Guardian.

Yet, according to a 2017 survey commissioned by the U.S. Broadcasting Board of Governors – the precursor to the USAGM – one in ten Cuban adults surveyed (1,478 people) said they used Martí content in the previous week. The survey, a summary of which was provided to the Knight Center by the USAGM, then estimates that about 1 million adults accessed Martí content via radio, satellite TV, online and via “paquetes,” flash drives or DVDs loaded with informational and entertainment content, during that time period.

According to CEO Lansing, a joint USAGM-OCB working group was set up to address recommendations from the recent experts’ review and will look at five areas that include things like “updating journalistic standards” and “producing relevant; engaging and balanced journalism consistent with the legislative mandate.”

Another reform includes the hiring of a Standards and Best Practices Editor, who Regalado said will start in the position by the beginning of July.

As Lansing wrote, employees are also going through training in fairness, objectivity, balance and bias in coverage. Regalado brought someone from the Anti-Defamation League to talk with employees in the Miami office.

Regarding the future, Regalado, an ex-broadcast journalist himself and a former mayor of Miami, talks about a change in culture.

“Being a federal employee guarantees you total isolation of people looking at what you do and how you do it, of oversight, responsibility, and we have shown with this investigation and the result that if people act in an unprofessional way, even if they are federal employees, they can be terminated,” Regalado explained.

The future also entails being “the main source of news about Cuba in the world,” he said.

The agency strayed from its mission in the past, he explained, and now he is responsible for implementing reforms to the OCB.

“I think the people of Cuba deserve it,” Regalado said.

He pointed to articles covering the independent audit that were included on Radio Televisión Martí’s newscasts and digital site following the report’s release.

“If we want transparency for the people of Cuba, we need to be transparent.”

However, when later asked about the expert panel’s assertions that Martí “engages in propaganda and the promotion of a current administration’s foreign policy,” Regalado said the assessment “is incorrect if we are talking on current time, the problem is that the report paints only one picture.”

As an example, he called attention to Martí’s coverage of the meeting between U.S. Vice President Mike Pence and Canadian Prime Minister Justin Trudeau.

“Both disagree on the Cuba issue talking about Venezuela,” Regalado said. “We gave the same time to both dignitaries.”

Propaganda won’t be part of OCB’s future, either, according to the director.

“There is a tendency to accuse the U.S. government media as propaganda,” he said. “The fact is that USAGM networks have a higher standard and are able to act to terminate employees who stray from the strict code of ethics.”

He did say that the OCB reports statements from the Secretary of State and congress members regarding Cuba, Venezuela and Nicaragua without commentary.

He added that OCB reporters must attempt to get comments from Cuban officials for their coverage on the government, but that they always receive a “No comment” or “We don’t talk to you.”

“I believe that we cannot censor our reporters by telling them not to report an official statement from the US government,” Regalado said. “We always do offer, at least now, the opinion of Congress or reliable stakeholders criticizing those statements.”

*This story has been updated to include a response from OCB Director Tomás Regalado concerning how the network will define itself in terms of producing objective journalism or propaganda.