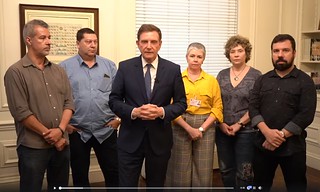 In the video announcing the boycott, posted on the night of Dec. 1, Crivella and city hall’s chief communication officer, journalist Daniel Pereira, called the newspaper a “political pamphlet” and relate the newspaper's critical coverage to the reduction of the purchase of ads by city hall. Pereira says the newspaper's requests for comments from city hall are about coverage that is 70 percent negative. They say that because of this, they will no longer answer requests from comment from reporters.

On Dec. 2, the mayor posted another video on Facebook, this time threatening to sue the two reporters who signed a report about an investigation of the public prosecutor that accuses city officials of charging bribes to release payments to businesses. He refers to the journalists as “rascals,” “scoundrels” and “without character.” In this video, he is surrounded by professionals working in communication in city hall.

As mentioned previously, on Dec. 3, the city hall banned a reporter and a photographer from Globo from participating in a press conference about the New Year's Eve party on Copacabana beach. Other journalists from Grupo Globo-owned outlets withdrew from participating in the interview in solidarity with their colleagues.

In a statement, newspaper O Globo said that "by not replying to these requests for comment, the mayor fails to provide clarifications not to the newspaper, but to the population of Rio de Janeiro, who elected him." The newspaper also said it intends to continue making requests "and giving city hall some space before publishing reports on municipal management and its authorities." 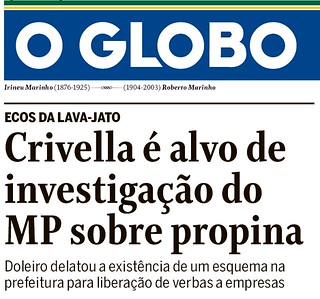 “Regrettably, the mayor acts in a non-transparent manner by preventing the city government from providing answers to O Globo. City hall is a public institution and, as such, would have a duty to render accounts to society. With the refusal, it loses the opportunity to provide its counterpoint and offer explanations,” Marcelo Rech, president of the National Newspaper Association (ANJ, for its acronym in Portuguese), told Globo.

The Brazilian Association of Investigative Journalism (Abraji) criticized the decision of the mayor of Rio and alleged that it contradicts four items of the constitution: “the action contradicts the principles of impersonality and public administration transparency. It also violates two fundamental rights: freedom of expression and the right of access to information.”

The organization also recalls that Crivella is nephew of Edir Macedo, owner of Record TV, one of the main competitors of TV Globo. "Failure to attend to a newspaper for not liking the facts would be childish if it were not from a public agent – who is obliged to satisfy society about his actions and omissions," the statement from Abraji said.