After a call by the Mexican journalistic organization Quinto Elemento Lab, a journalist and photographer who are experts in migration coverage traveled and photographed the ghost routes caused by the pandemic that migrants use to cross the southern border of Mexico.

“Migrar bajo las reglas del COVID” (To migrate under the rules of COVID) is a series of five stories that were the product of a ten-day trip between July and August through the states of Veracruz, Oaxaca and Chiapas. Journalist Rodrigo Soberanes and photographer Javier García once again returned to the path of migrants entering Mexico –many of them hoping to reach the United States–, but this time also taking care not to catch the deadly coronavirus that has spread across the whole world.

In an interview with LatAm Journalism Review (LJR), Soberanes said that at the beginning of the journey they realized the scenarios that García and he knew had changed greatly. "The migrants were no longer on the migration routes," he said.

"The migrant route is a route where there is a lot of violence as well, and now with COVID, it was another thing to watch out for," Marcela Turati, co-founder of Quinto Element Lab, told LJR.

Turati, who accompanied the entire editorial process for the stories, said there were several risky points on the path of reporting. The journalists had to go through some very unsafe areas of Veracruz, and others in Oaxaca, mainly because, according to the reports, they found everything closed. The shelters, the cities of those southern states were closed, and the atmosphere was very tense. "They were also finding different stories, which they were weaving together and following," Turati said.

The guest editor for the series was Peruvian journalist Diego Salazar. He told LJR that the most important thing at all times was to help the journalists not lose sight of the pandemic, which was the central focus of reporting. "Central American migration that enters Mexico through the southern border is such a big and fascinating subject that we were a little worried about losing focus and that the migratory phenomenon itself would end up devouring the stories," he said.

According to Soberanes, the tour began at the Las Patronas migrant shelter, in Veracruz, where they collected a lot of information and found their first story, “El COVID puso de cabeza el mapa de la migración” (COVID turned the migration map upside down)," after meeting Salvadoran Óscar Rivas.

“Óscar was a migrant who had arrived on foot. So this reinforced the idea that the migrant was unable to interact with the population, because they were going to look for hidden paths and their path, let's say, the most organic thing for them is to follow the train tracks,” Soberanes said. “It's like something in the DNA of the migrant from the northern triangle of Central America, following the train tracks in Mexico, and that's what we did, we looked for them there. What we found was news, but what we could not find also began to make news,” he stressed.

One of the things that Salazar and the editorial team of Quinto Element Lab asked the journalists, according to the editor, was to document what had changed, what COVID-19 had done with the routes, the dangers and the "usual" situations faced by migrants.

“Of course, they both had experience in migration matters and knowing the area helped a lot, since they were able to perceive differences and nuances of the current moment of the phenomenon compared to, say, a year ago. Nuances that for me, if I had landed there as a reporter, would surely have gone unnoticed. Never losing sight of that I think was the key to Rodrigo and Javier's work,” Salazar said. 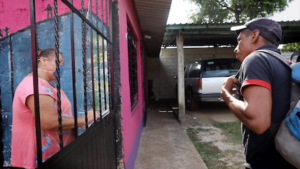 Regarding security measures, Turati said that they made the protocol that is done for risky areas together. “First, Signal is used, WhatsApp is not used, to communicate. From early on, they sent their location, they told us where they were and we had the entire route they were going to follow, the plans, and what time they were going to arrive, and in each place, who to contact if there were problems," she said.

They also left photos of themselves in the car and sent their editors photos of how they were dressed that day, according to Turati. "Perhaps, to other reporters from other countries they seem very crude, but in Mexico they are already common, as you don't know if something is going to happen to you on the road, if they can hold you, or worse things," she said.

It was very hot on the road, almost the whole time they had to report at more than 95 degrees Fahrenheit, using face masks, glasses and face shields to be able to get closer to their potential interviewees, Soberanes said.

"There was a point where it was complicated, for example, with a community of Haitians who were all sitting on a sidewalk, in Tapachula (Chiapas)," the journalist said. “All without protection and I arrived and sat down with them to talk in the middle of everyone. They surrounded me shoulder-to-shoulder, and I had on this whole Breaking Bad outfit.”

According to the journalist, the atmosphere was very suffocating, the Haitian interviewees hardly listened to him, and he had to remove his face shield and keep on just his mask because his glasses were fogging up.

Salazar and Turati always asked them not to relax security measures, but journalists had to deal with it as best as possible during the process of reporting. At the end of the days reporting in the field and spending a few days isolated and away from their families to hope that there had been no infection or subsequent symptoms, they were able to return to their homes. 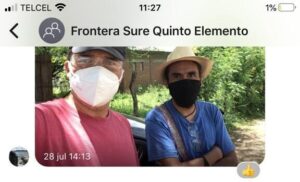 Screenshot of the communications between Rodrigo Soberanes and Javier García with the editors Diego Salazar and Marcela Turati. (Courtesy)

“We talked a lot about it and asked them to please be particularly scrupulous, that they were going to areas where the pandemic was more out of control than others and that we did not want them to take unnecessary risks. Fortunately, and thanks to their responsibility, both fulfilled the mission without getting infected or having any other health problem,” Salazar said.

The result, for Turati, was very good. “The five stories are super different, they are good. I feel, first, very happy because it could be done and there was no risk. I am also very proud of them because they were brave, but also because I know their spirit and commitment to the migrant population is very strong,” she said.

The story of Oscar, the Salvadoran migrant who walked for forty days, and that of the Haitian baby and her parents Velnays and Sergoi, who migrated from Haiti to Chile and then crossed half of America until they were stranded in southern Mexico, were the stories that Salazar particularly liked.

“I think they are very personal stories, that tell a particular drama and that, despite being situations that can be very far from those experienced by most readers, they make those who read them understand the innumerable difficulties and dangers these people face, that they have no choice but to emigrate, and how these dangers and difficulties have been multiplied due to the COVID pandemic," he said.

According to Turati, between July and August this series managed to portray a piece of the puzzle on which academics, human rights defenders and humanitarian personnel, journalists and people interested in migration were asked: what was happening with the migrants?

“We were able to take several still photos of that moment, at different points on the southern migratory route and through various protagonists, to see what was happening, what trends there were [from the pandemic],” Turati said.